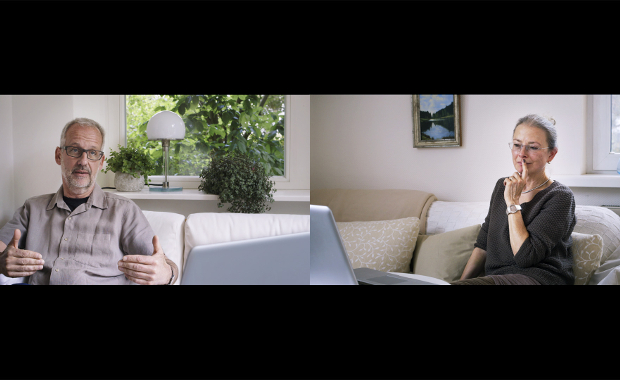 “My parents were never a couple” is the refreshingly candid statement that opens, Er Sie Ich, in which Carlotta Kittel delves into the murky depths of her parents’ relationship or, rather, lack thereof. In it, the 29-year-old Berlinerin interviews her mother and father, then shows each one the other’s interview, filming their reactions. Both deeply personal and at times uncomfortable, the documentary traces their story as each of them tells it, from when they met through the present, exploring the idea, reliability and nature of memory. In case you missed the double-award winning doc at Achtung earlier this year, here’s your chance to catch it with Kittel in person (and English subs!) at our next EXBlicks on Monday, September 25, 8:30pm at Lichtblick Kino.

Why did you decide to make a film about your own parents? That’s kind of intimate…

The starting point was really those two worlds that I grew up in [with my mother and my father]. I kept my life with my father and my mother entirely separate. Whilst in the film we talk about that at the end, it was my personal starting point. I grew up with these two separate lives, I always had these conflicts between both, and I thought, “Wait a minute, what if they heard what the other one tells me, it’s so contradictory in every single detail. What if they heard that and could see how crazy this all is, maybe they could understand something about their own conflicts.”

Why make it in this format, with multiple interviews?

From the filmmaker perspective, the idea was that we would have this dialogue that we would create through the editing. Since I come from editing, that’s very much my way of working. I like where the actual film creates something that doesn’t exist in reality. It’s quite conceptual actually.

Had you heard their stories before?

My dad had told me his side of the story years before, when he took me to Copenhagen for my 18th birthday. I was quite shocked because I hadn’t asked for it and I think I was too young, With this film it was my decision, I could record it and watch it at my own pace, rather than having to hear it unwillingly and think “Oh god, this is too much.” With my mother we never sat down and had a big talk, she told me small things in daily life, but not the whole thing.

Was it difficult to get both parents to agree to participate?

I was lucky. The project started very small, it was just more of an exercise in my third year of studies. Of course for me it was always clear that you make films to show people afterwards but I think they didn’t really understand that at the beginning, they didn’t imagine any sort of outside audience would see it.

They agreed initially to the first interview because I think they both really wanted to tell me their story as parent to daughter. When we did the second interview, it was immediately a lot more serious because we had the crew; the first one I did on my own. But they did it because they had started it and I think the main reason was for me – they wanted to help. Maybe also they wanted to show me that they are right and the other one is wrong, I think it’s a little of both.

Was it all smooth sailing?

They had some issues along the way. For quite a while my father wasn’t cool with the idea of people seeing the film. We had a long, hard time with it but I finally convinced him that it’s good for other people to see that; it’s not just about him, they’ll identify with the stories and judge themselves and their own conflicts, rather than him. He finally kind of got that idea and said okay.

Did it affect your view of your parents?

I reviewed the interviews so often, watching and analysing the footage, that I then understood quite a lot; how a person builds ideas in their head, builds the meaning of what they say, how they try to manipulate you knowingly or unknowingly. I see them now from an adult’s perspective and less from a child’s. It helped me understand a lot about both of them.

The first and second interviews are four and a half years apart. What effect did this have?

Initially I didn’t want it that way because it was meant to be about 30 years ago versus now, and I thought it would be confusing to the audience to have two “nows”. But in the end I think it actually worked really well because the whole thing about memory and how it changes through time is one of the main topics of the film, and comparing these two “nows”, how they aren’t consistent, highlights that the people themselves are not consistent. Some things are exactly the same between the first and second interview but some things have changed over time and I liked that.

Were they happy with the outcome?

Before the premier with them both there I was thinking, “Oh god, my life is going to end on that day, I have no idea what will happen!” But it turned out to be a really great moment. They were both really, really moved. They even hugged. It was a very emotional moment. It’s over already though, now we’re back to the usual but it was nice for that short time.

Although they didn’t come to any understanding between the two of them, I think through the film they have made a little peace with themselves – with everything that has happened and their own role in this conflict through the years. I think they got a kind of inner peace.