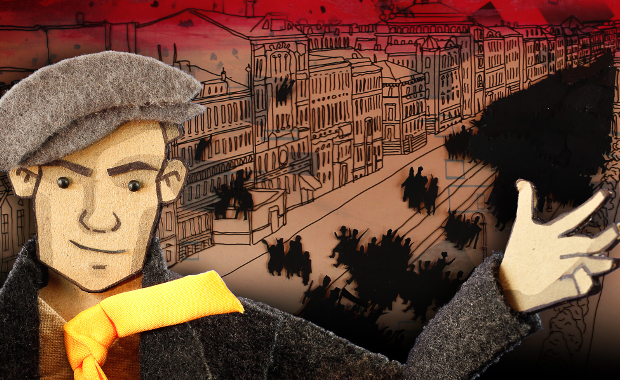 The revolution will not be televised – it will be animated! And that’s exactly what documentary filmmaker Katrin Rothe did on the occassion of the 100-year anniversary of the 1917 Russian Revolution in her beautifully rendered film 1917 – The Real October. Using first-hand diaries and accounts from history books, Rothe looks at how artists like Maxim Gorky, Vladimir Mayakovsky and Alexandre Benois experienced the uprising, with a unique paper cut-out animation style. The film has already made a splash at 2017’s Achtung Berlin and at Annecy International Animated Film Festival; now it’s set to take Lichtblick Kino. Watch 1917 (with English subs!) and meet Rothe at our EXBlicks presentation on Thursday, June 22 at 8:30pm.

This year marks the 100-year anniversary of the Russian Revolution. Was it your motivation to do this documentary?

The idea actually came long before the anniversary. The idea was to explore alternative ways to tell history from what we were told at school – what we now hold as ‘truth’. During the financial crisis of 2008, sales of Das Kapital by Karl Marx shot up; it was obvious people were looking for an alternative history. And I wanted to hear it from witnesses of the revolution. But they’re obviously not alive anymore, so I used their books and diaries as their declaration of what happened. And in that way, what they have seen and what they have done is the truth, at least their truth.

How does what you learnt growing up in East Germany compare to what you know now?

What I knew from my East German education was obviously influenced by the Soviets; it was a typical socialist education. Some of us were actually good students, but for most of us it went in one ear and out of the other. You had to learn a lot about it, but you didn’t really listen. So I didn’t really spend time thinking about this stuff – and we had easy access to West German TV and radio at that point, too. But the official socialist way of telling the story is that the Workers’ Party led the revolution from the beginning to the end. Compared to [the reality] that it was a movement from the people themselves. It started without Lenin and Trotsky – it was organised purely by the workers, initially women. There were a lot of self-made leaders. They did it on their own, they organised themselves, to demand an eight-hour day from all companies.

The documentary uses the perspectives of well-known historical figures like poet Vladimir Mayakovsky, and less well-known ones like historian Zinaida Gippius. How did you go about choosing whom you used in the documentary?

Zinaida Gippius is a chronicler, a really important chronicler, and a lot of historians used her writing but they don’t mention her, I discovered. I wanted to give her a voice; she’s not getting her place in history. She was quite influential in these times, as a woman. Mayakovsky I knew from my childhood, I knew his artworks and that there would be a lot of material on him. [Maxim] Gorky, well, I like his heart, his approach with his emotion and his way of telling things. [Alexander] Benois was a famous art critic, and he had these beautiful, long descriptions of a lot of the events.

Why did you choose animation to explore the Russian revolution?

There aren’t any witnesses anymore, so to know their story you need to read their books. If you read a lot about someone then you get a picture in your head, and I wanted to show pictures which you couldn’t find anywhere else, so I had to make them for myself. I mixed my own pictures, the new, with the old – for example Mayakovsky’s catalogue book shown in the film, or Sergei Eisenstein’s film October.

The basic idea was that it would have to come from these first-hand accounts in books. Books are made from paper so, with the paper cut-outs, the story and characters come straight from the books. We developed this style for a feature-length film for the first time.

Each of the characters has differing views on preserving artwork from before the revolution; whether it should be destroyed along with the monarchy or preserved as part of history. What is your own opinion?

Of course, it’s important to preserve art because you are preserving history, which is contained in art. And not just upper-class art. In those times, only rich people could become artists. That’s part of what they’re fighting about in the film. Mayakovsky had the idea that anyone could become an artist, and we must hold onto this idea today and ensure that option is still viable. We need scholarships and workshops, space to work – and not just privately funded – to ensure that a wide range of artists get money to create.