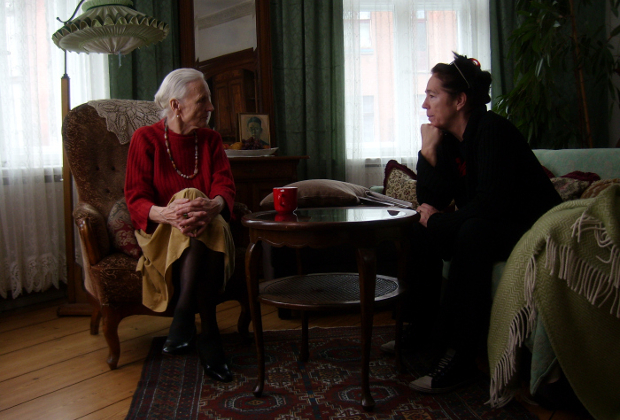 Join us as we present A House in Berlin at Lichtblick Kino on Tuesday, March 14 at 20:30. As always, the director will be present for a Q&A session after the film.

Filmmaker Cynthia Beatt has explored the urban fabric of Berlin throughout her prolific career, from Cycling the Frame (1988) and The Invisible Frame (2009), a pair of films that centre on Tilda Swinton’s tracing and retracing of the path of the Berlin Wall via bike, to her 2014 film A House in Berlin. After receiving news of a great-uncle’s bequest of an ostensibly decaying Berlin apartment building, protagonist Stella Miles leaves her native Ireland to meet with a lawyer to organise the building’s sale. As she becomes more and more fascinated with the property, Stella is drawn into a narrative web that crosses temporospatial boundaries, from World War II Germany to modern-day Palestine, all the while weaving through a familiar repertoire of Berlin canals, squares, and ambling boulevards.

A major theme of the film is the main character Stella’s relationship with Berlin. Is this at all inspired by your experiences as a foreigner here?

Absolutely – when I moved to Berlin in 1975 I lived in the top floor of an old factory on Potsdamer Platz, and spent a lot of time walking around at night through the semi-ruinous surrounding area. Coming to know a city is all about being alone, and having an almost existential relationship with the nocturnal environment. In the film, Stella is driven by a quest to understand something she knows nothing about, and it’s the house that carries her along, like a sort of spirit, through the streets of Berlin.

A House in Berlin is told in a very unconventional style, blending elements of documentary with more traditional, narrative filmmaking – how did you arrive at this pastiche of cinematic approaches?

Every film requires a new way of creating content, and every tale told must be addressed formally. A House in Berlin arrived at its current state after years of research and thought, combined with the unavoidable practical limitations that come about in the film world. It’s these limitations, though, that allow one to truly showcase their creativity – after getting a very small grant to make the film, I decided to take the financial limitation as a sort of challenge, and show everyone exactly what I’m capable of. I wouldn’t align the film with a documentary genre so much as I would place it within an essayistic realm – and by that I mean that I started with a question, and found all sorts of valuable content as I moved towards answering it.

There are several well-known Berliners in the film, like actress/director Angela Schanelec, alongside people with no acting experience at all. Do you enjoy working with non-actors?

When I’m working with actors, I don’t like to force a performance out of them – I’m really not so interested in acting. As a matter of fact, I think non-actors can be a lot more real in their roles, because a lot of times actors get stuck acting rather than feeling, which is not something you need to worry about with artists, or people who don’t usually act.

The eponymous house and those within it seem to act as a representation of Berlin.

My quest in making the film was the story of the house, but I don’t really think in terms of representations and symbols – the house is, inherently, itself. It’s its own sort of entity. The people within the house, and those you hear about living in the house, are, however, real people who do exist throughout Berlin. In particular, Frau Otto, an elderly character in the film, embodies the bending and erasure of memory so common in older Germans.

And within the film, these streets of Berlin are a kind of character themselves.

And again, it’s the process of walking through them that reveals this, traces of the past mediating one’s experience with the present. This is even more true of houses – houses have souls, spirits. I’m not sure what it is – but there’s a definite difference between entering into an aura of beauty and safety and one that makes you feel awful. What has happened within a space, and the ways people have used it, leave a definite impression that can be immediately experienced.

There’s a comparison between Nazi land grabs in Berlin and those of the Zionists in Palestine. How did you come to see this parallel?

Very organically, much like the process that Stella does through in the film – by meeting and having conversations with artists and scholars throughout my travels. Eventually I was speaking with a sociologist from Lebanon, and he said that he had a home in Haifa that was taken by the Israeli government. He still has all of the legal documents that assert his ownership of the house, but he nor his family can no longer even enter. I was aghast! Both at the tragedy of his situation and my own ignorance of it. This is what really inspired my research into Palestine – I thought, why is nobody talking about this?