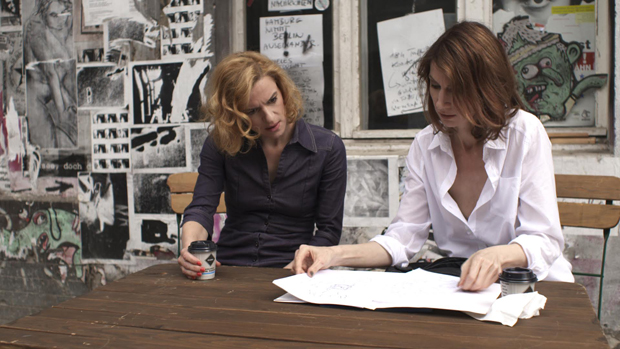 An enormous mechanical King Kong climbs the TV tower at Alexanderplatz and brings it crashing down. “Don’t panic! It’s just art!” Experimental filmmaker Robert Bramkamp’s Art Girls mixes together everything it can get its hands on: art with (mad) science, philosophical ruminations with satire, interpersonal drama with B-flick nonsense. It invites us to question convention and consider alternative approaches to both art and life. EXBlicks will present Art Girls at 8:30pm on Monday, November 9 at Lichtblick Kino, in cooperation with realeyz.tv.

Bramkamp will be on hand at the presentation for a Q&A alongside lead actress Megan Gay, but we also spoke to him in advance about what he hopes can be taken away from Art Girls.

Why did you decide to set the film in Berlin?

Berlin is valued around the world as an interesting art space. The Americans like to say it’s the only international city in Germany; that’s not true, but it is certainly the international city. And the art the film showcases is very interesting, and it should be shown and defended. It was always particularly apparent how international the art in Berlin is.

Yet Art Girls has a lot of satire aimed at the art scene, such as how Una and the gallery owner interact.

He can’t even display the video that she worked on for three months. He comes up with some excuse about an intern – he doesn’t give a shit!

There’s a recurring phrase in your film: “Kunst, die wirkt” (art which has an effect). What effect do you hope the film will have?

I hope the film has an anti-fundamentalist effect. It should present alternatives to the conflict narratives to which we have grown so accustomed. By intensifying good and evil, those dramatic models offer far too few alternatives, and are constantly producing stories that we already know. It’s not just boring, it’s disastrous. Art Girls should be fun to watch, but hopefully also continue to resonate and produce echoes after watching. It should show us there are more options than we think, in real life as well. The film should be alluring, entertaining, funny, also a little unexpected – you have to be when dealing with freedom.

But the film contains elements of those ‘typical’ conflict-based Hollywood stories – disaster movies, King Kong etc. Were you using their own weapons against them, so to speak?

It’s not necessarily aimed against those stories, rather the fact that those stories have the upper hand and guide everything. The film poses the question of whether it’s possible to have alternate narratives through which to perceive the world. There’s a conversation between the two artists, where one says “You need an antagonist and you need a protagonist.” And the other says, “That’s not enough.” It’s clear that they have very different ideas.

Those B-movies always deal with the technological dream, right? By combining media art – contributed by Susanne Weirich and many others – with these genre-movie situations, it brings together two things that are usually seen as opposites. On the one hand, love, language, imagination, the “slow track”. Then there’s the “fast track”, which gives you everything at once, no labour of love necessary. That’s the allure of technology. These tracks collide in the film, and the manner of this collision is crucial. If it’s just rigidly one against the other, we’re like hamsters on a wheel.

One of many ways to interpret the film is as an allegory for the dangers posed by technology.

We experience our own technology as if it was magic. That’s dangerous and psychologically unhealthy. The film asks, how we are to confront these technologies – as individuals or as a group? But the film’s not anti-technology! What it suggests is that we will find ways to bring them together differently. There’s no enlightened plan behind these artists, they’re just interested in making good art that actually becomes effective, and isn’t just serving the art scene. I despair sometimes at how art is discussed. I can’t stand it anymore!

You’ve released the film internationally on iTunes and realeyz, in six languages – that’s an example of technology helping art.

And in HD! I have to admit, that’s pretty great. And that’s why it’s important to see how we can bring technology together with our daily lives, with art, society, democracy (not fundamentalism!). Film in general is technological, and I love it! You can use it to create a world, create feelings, provoke thought. And it’s collaborative. Sure, the screenplay is important, but there’s two years of work in there with lots of different people: sound designers, artists, actors, editors, animators. It develops just like the collective storytelling that Art Girls posits as an alternative.

Exactly – set in a space between art, love and technology. With the message that there is an anti-fundamentalist option. That’s the film in a nutshell!