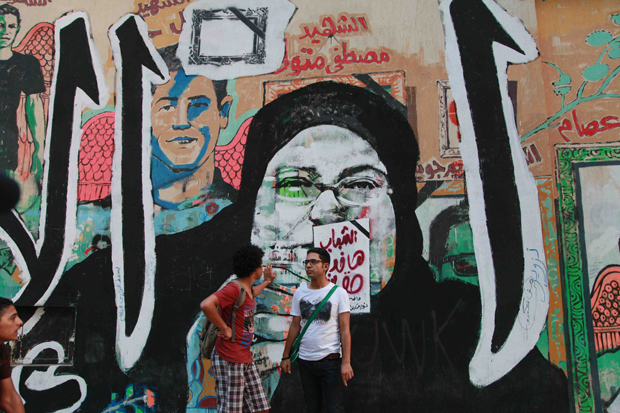 Graffiti, rebellion, politics, revolution, art. Equipped with a gas mask and camera, Berliner Marco Wilms followed a handful of young artists, armed with nothing but spray paint and incendiary lyrics, who risked their lives during the so-called Egyptian revolution. The film is a very personal document of the two years of anarchy between the 2011 Arab Spring and the 2013 parliamentary elections, from the boom of creativity after Mubarak’s fall to the military backlash against the Muslim Brotherhood. The visually stunning Art War is a unique, on-the-ground portrait of Egypt’s talented yet disenfranchised younger generation.

Catch our exclusive screening with English subtitles followed by a Q&A with the director and complimentary wine on Tuesday, May 20 at Lichtblick Kino at 8pm. Presented in cooperation with realeyz.tv. See more at here.

How did you decide to make a film about art after the Egyptian revolution?

When I saw the pictures of the young revolutionaries at Tahrir Square on TV in 2011, I was reminded of my own revolution and the fall of the Wall in East Berlin in 1989. Art War offered the possibility to make a movie about young people in the middle of an epoch-making cataclysm. People that are now the same age I was in 1989 after having grown up in the former capital of the GDR.

I was actually planning to do a film about the Egyptian-German writer Hamed Abdel-Samad. Hamed was already in the middle of the revolution in Egypt, so I travelled there as well. I wanted to write the script for the – then not financed – film about him. But then I was sucked into the revolution and I started shooting Art War.

At the beginning I was following the political events, like the first “free” election in Egypt. But then I noticed that none of my artists went to vote. They boycotted the election because they found the situation under the military council unacceptable and manipulative. Instead, they painted huge portraits of the murdered young revolutionaries right on the walls in the middle of Mohamed Machmud Street. It was at this moment that I understood that this was the artistic image of the revolution. It was complex and poetic, it discussed cultural roots, history and individual emotions. Those pictures became the memory of the revolution.

How did you choose your protagonists?

From the first day onwards I was included in the fights at Tahrir Square. I stayed at the Cecilia Hotel on the roof from where you could see the fought-over Machmud Street. While the tear gas grenades kept exploding, I was sitting with the activists in Cafe Nada drinking tea during the breaks between fights.

Next to me sat a young man with a sketchbook. In it were drawings of Alia El Mahdy, who had just posted nude pictures of herself to protest against the constraints on behalf of the “Islamic morals”. I was familiar with the scandal surrounding her online performance, where her pictures were clicked on three million times and she received death threats. I just shot Ammar while he was drawing and asked what he was up to. He said he wanted to do graffiti. I asked if I could film while he did that, and he asked for my phone number and called two days later, at night, at 3am. He asked me to come down to Tahrir Square. They would start now…

This scene of our first meeting was exactly like that in the film. I met the other artists in similar ways, always in the middle of everything happening.

Who’s your favourite protagonist and why?

My protagonists embody different facets of the revolution’s art. Most of the film’s time was granted to Ammar because his spiritual concept provided the framework and motive for Art War. During the shooting, Ammar said that the Sufi Festival, the Mulets had the same spirit as Tahrir. A community of diverse people with different opinions meets in spiritual harmony, connects music and dance with the universe and God. That is why Ammar writes “There are as many ways to God as there are souls on Earth” on the sun boat at the end of the film. It’s an affront to the Islamists who claim they own the one and only truth.

What was the most difficult part of making the film?

Working on the film was dangerous. Also, some of the graffiti artists lost their lives. But none of my main protagonists. When I was shot at three times while filming the fights in the streets, I stopped filming the riots. But I had all the material to express what I wanted to express in the film, then. The hardest part was not knowing what would be shot during the day. No one knew what would be happening next. That led to problems in financing the film. I filmed for a year and a half without any money – not until ARTE and the MFG gave me money in 2012.

You were accused by some of sacrificing political content in favour of a creative approach. What do you answer to that?

I don’t understand what is meant by that. The artists in the film speak for themselves and no one else. The film shows their biographies from 2011 to 2013 without commenting on or judging them. There are people in the West who want to see their prejudices confirmed and think all Egyptians need to be anti-modern and conservative Islamist. That is not true, and that is what the film shows. Those beliefs are “well-meant” racism.

The film ends mid-2013 – what has happened to your protagonists since then?

How do you see the future for them?

The artists are young, they have become world-famous with their work and they are right with what they express. But they are way ahead of their time. I hope there comes the day when they are recognised for their grand contribution to the revolution, when we can show Art War in Egypt.

Did you show your film to Arabic or Egyptian audiences?

Many Egyptians in Germany saw the film. I have been well-connected with the community since working on the film. There have been screenings of unedited scenes at the Kulturverein Mayadin and discussions of them and they helped me there during the whole process. The film is now on tour from festival to festival and many people from different cultures see it. The reactions are similar, mostly very positive.

In Israel, which is looked at by many Egyptians as a hostile country, a woman from the audience at the Docaviv Festival said that the film has brought her closer to the Egyptians and that they thought quite similar to her. Apart from attacks from Islamists and fans of the Muslim Brotherhood, I receive many positive letters about the film from Egyptians. I believe they are proud of the film in the same sense (or spirit) as “Walk Like an Egyptian”. They are right to be proud of those young Egyptian revolutionaries and artists. Even though their dreams of a reformed society have not yet been reached, and seem to have been moved even further away to the future at the moment.