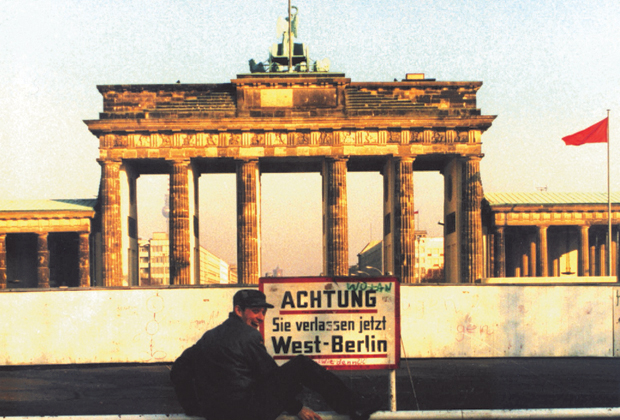 Mark Reeder’s narrative of events and atmospheres during the pre-Wall decade is the backbone of B Movie: Lust and Sound in West-Berlin 1979-89.

Reeder, a music producer and artist in his own right, was drawn to Berlin’s electronic pop and nascent punk scene when he came over from the UK in the late 1970s, making a name for himself amongst future icons like Nick Cave, Blixa Bargeld, Die Toten Hosen and many, many more. His documentary premiered at this year’s Berlinale and screens at our Exblicks event on May 30.

And don’t forget to check out the podcast version of the interview.

The film is made up of previously unreleased material from film and TV. You’re the narrative thread, telling your own story. How did that come about?

I was deemed subversive, obviously.

Originally Jörg Hoppe, one of the producers, was looking for someone to restore the music. Then he delved a bit into my background. The original idea was to make some groupie girl waltz us through the story and then he realised, like, wait a minute, here’s someone who was actually involved in the actual scene as a participant but also viewing it from the perspective of a foreigner in Berlin at that time.

What was it like the first time, stepping into Berlin?

It was like Manchester, actually. It was a rainy June evening, a depressive sort of ambience. In a sense, I felt really at home. The next day, I thought I better call my mum and let her know that I’ve arrived safely, so I’ll go and get some change for the phone. There was this bar on the corner of the street and there was a transvestite there and he was like: “Yes, darling, what do you want?” And I thought: I’m in Berlin! With this guy in a bar with bright red hair and a polka dot top on. You’d never see something like that on the streets of Manchester. And one thing led to another and I kind of like fell into this Berlin scene.

What was it about the city that made you want to stay?

The fantastic music scene. Interesting, exciting people. And then, there was East Berlin. Nobody knew anything about East Berlin. All the punks and people who looked weird never went there because of the way they looked. Blixa? They’d never have let him in. I was able to conform to their image of what a conservative man could look like. Short hair, shirt and tie. Looked straight.

You put on a secret gig there…

She said: “I’ll meet you at the Palast der Republik in the cocktail bar.” I was a bit wary about what this could be.

A girl wrote to me from East Germany. A postcard. It must have taken about two weeks to get to me. And she said: “I’ll meet you at the Palast der Republik in the cocktail bar.” I was a bit wary about what this could be, but she actually just wanted to sound me out. We were sitting at a table drinking beer and this hippy in a Wrangler jacket and frizzy hair overheard us talking. He said: “I’ve got an electric guitar.” I asked, “Where d’you play it?” “At what’s known as a Blues-Messe.” A kind of gospel church thing where someone plays “Go Tell It on the Mountain” on a guitar. So I thought, “I’ll take Die Toten Hosen over.” There happened to be a band called Planlos who were going to do a gig in the church, so we kind of hijacked that. It was really small. Only like 50 people came. But it became this legendary thing in East Berlin because somebody had dared to do this. That was really invigorating and I was deemed subversive, obviously, by the East German authorities. “What’s his agenda? He’s obviously got something up his sleeve.”

It sounds like the scene was starting to wane even before the Wall came down. What changed, exactly?

Probably the fact that everyone tried to better themselves musically. Like Einstürzende Neubauten. Originally, they’d just go to a building site, grab what they could get and perform with it. Once they’d made an album, with Gareth Jones, it started to become more regimented. At gigs, they had to play the album. They had to practice that. It started to become more normalised. Started to go towards the coffee table.