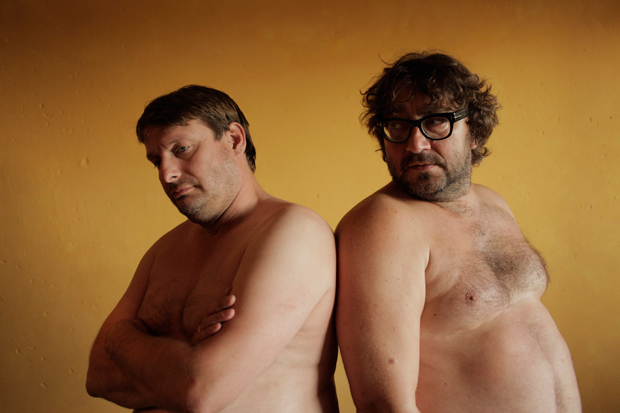 In Dicke Mädchen (English title, “Heavy Girls”), director Axel Ranisch delivers one of the sweetest portrayals of dysfunctional family dynamics in recent memory, delicately ensconced in a love story between two unlikely men. Sven (Heiko Pinkowski) shares a lot with his nonagenarian mother, Edeltraut: dwelling, thoughts – and a bed. During the day, while Daniel works, Edeltraut is cared for by Sven: almost a family member himself, Sven is also a good friend to Daniel. A delicate balance is maintained – until the unexpected happens. Ranisch’s first feature movie has become a surprise hit on the festival circuit, bringing international recognition for the film, its director and one of its most charming protagonists.

Join us at EXBlicks, our monthly film series in cooperation with realeyz.tv, for a screening of Dicke Mädchen with English subtitles. Director Ranisch will be on hand for Q&A afterwards.

It’s called “Heavy Girls” and yet there aren’t any girls in the film. Edeltraut is in her nineties.

Well, we filmed this scene at the lake where the guys smear themselves with mud and perform aboriginal rituals. And Heiko Pinkowski’s son was also there, he’s about 14, and on the way back he said, “You guys were acting like two fat girls.” So I thought that it would be a great title. It fits perfectly. We chose the English translation “Heavy Girls” because I thought it should be a bit grammatically incorrect. You don’t say “heavy girls” in English right? And translating it like this would also keep the more positive overtones of the German title, “dicke Mädchen”, which sounds nice.

How did the film come about?

I’ve been working with Heiko for eight years on a number of short films and I met Peter while I was cutting a film, Papa Gold (2010). I invited Peter to a game night at my place and Heiko and Peter were sitting next to each other and I thought this is the perfect “romantic couple”.

So the idea came from seeing the two of them together?

We started shooting a week [after the game night]. I was walking with Heiko around the lake and we thought about our story and came up with the idea that Heiko should play a man who lives together with his mother, who has early dementia. I have a great grandmother; Ruth Bickelhaupt is actually my grandmother, but I didn’t know how well she could act. I mean, we’d done short films together, but she had never had any text.

But she got to make up her own here.  In the credits, the dialogue is credited to Peter, Heiko and Ruth. Did they improvise most of their dialogue?

Yes, everything is improvised. We had a small version of the screenplay consisting of two pages of red line for our story and every scene that was scripted was one sentence. The sentence for the lake scene, for example, was: “Sven and Daniel have fun.”

How did the family dynamic with your Oma work? Was there any moment where it was like: I’m the director and you’re the actress or you’re the grandmother and I’m the grandson?

No, but sometimes, psychologically, in the evenings after we had finished filming I was like, “Oh, I think I killed my grandmother.” It was hard. Between the two of us, there wasn’t any sort of conflict, just that I would have to see my grandmother dying on set. When my sisters and my mother also saw it, they thought the same thing. But on the other hand she is so lively. She worked so much on the film. Traveled to different places, spending a year on the film, she was always there. She would even do more than me. She was in London by herself presenting the film.

Yeah, my favourite part of the film is always when the film is over and then Grandma appears on stage and she does her little dance and the crowd sees she’s not dead and she doesn’t have dementia.

The movie does a great job of taking things normally considered uncomfortable and transforming them all into something very sweet.

When you take the characters seriously you can assert a lot or assume a lot with what’s given, but I think the biggest thing is to not complicate it. You have so many issues in this film: homosexuality, responsibilities and social topics. But no topic is problematized in the movie; they all come from everyday situations. When you do everything normally you can even become a little bit political all of a sudden.