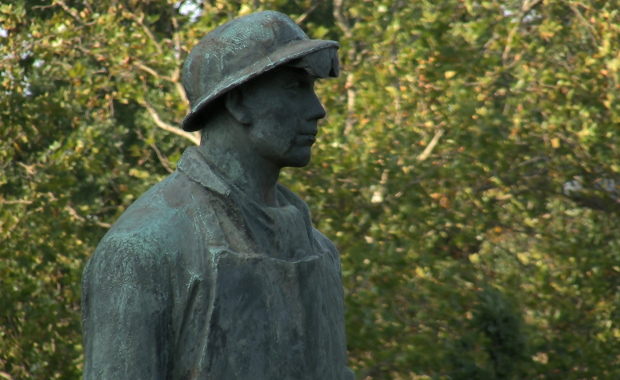 For our summer issue we ventured out to the end of the line(s), exploring the unknown edges of Berlin, and this month’s EXBlicks film night runs on the same track. Travel along with Sven Boeck for his 2010 film Die 4 Enden Der Stadt, exploring the Hauptstadt through four Stadtteile. Juxtaposing the stories of those who lived in these areas through Berlin’s storied past, from the Third Reich to the division of the city, against beautifully shot imagery of the industrial and natural landscapes that are found there now, Boeck weaves the stories of the people and the places together, connecting the corners with his own life and paints a lesser seen picture of the city from the outskirts. Join us for an EXBlicks presentation with Boeck at Lichtblick Kino on Monday, August 28 at 8:30pm.

Why did you decide to make this film?

I was born in Berlin – in former East Berlin in 1965. Since it’s my hometown, I was interested in what lies at the end of my own city. And Berlin really has ends on the map: Südende, Ostend, Nordend and Westend. I wanted to know what was in these places so I began my journey to each tip, and made the film as I went.

You have all these Berlin films, the oldest being 1927’s Berlin: Die Sinfonie der Großstadt by Walter Ruttmann, and right now there are so many projects showing Berlin as this ‘sexy’ city. There’s so much hype about Berlin. To only look at that aspect seems stupid to me. I think this view from the border of the city is more interesting.

So you took the literal four “ends” of the city and checked them out?

Exactly. I began in Ostend, since I grew up there, so it obviously seemed like a good place to start. It’s situated in the former GDR, East Berlin. And then Südende, in former West, seemed like the next step. I realised it balanced nicely, with Westend in the former West, and finally Nordend in the former East again. I found ‘actors’ for the narrative along the way. One thread of the story is mine, but I also included other peoples’ stories too.

What was the approach to making the film?

I didn’t research before I went to the areas. I just went there and shot. You have this totally new outlook that way and then you get a feeling for the place. Then after some research, I had elements of these people from the past that I talk about and some of the stories of these areas, and I mixed them together.

How did you come across those people and decide to focus on them?

I read about Judge Hilde Benjamin in East Germany, and from there I came across other people and found that each of their histories not only spanned different corners, but also became intertwined with each other. This became the story.

Hilde Benjamin was an important judge in East Germany. People called her Bloody Hilde because she was so ruthless; she caused great terror within the justice system. I discovered that she saw her husband for the last time in East End, two weeks before he was murdered in a concentration camp by Nazis. Then later, in West Germany, she saw some of the old Nazis walk free and she hated it. IThis is what made her so dedicated to fighting for communism and determined to make the new system strong. She died before Die Wende. But I found out these other incredible links with her too. Her husband’s brother was the hugely famous German writer Walter Benjamin and she was a friend of the Jewish poet Gertrud Kolmar.

Gertrud Kolmar, one of the most important female poets in Germany, grew up in West End but also has this link to the East End. She was not only Hilde Benjamin’s friend but in fact Hilde’s husband’s cousin. She was murdered in Auschwitz in 1943. So you have all these interesting interlinking stories that arise.

You unearthed some pretty gruesome stories.

In South End, I stumbled upon a stone memorial to Jochen Klepper in a park. I didn’t know anything about him before so decided to research him and find out his story. He was a German with a Jewish wife. In 1941, when the Nazis began killing Jewish people, she was safe because of their marriage but his stepdaughters were not. One went to London, but the other was too young and couldn’t leave Germany. The Nazis wanted to send her to Auschwitz so the family killed themselves. Before that, she had been a forced labourer in Siemens which was in the area of West End, so you see the connections, this network of stories.

Would you go back to the four corners to revisit them?

No I don’t think so. Right now I’m working on a new project, a film solely about Gertrud Kolmar. A lot of it is set in different areas of Berlin again; she was a forced labourer in Lichtenberg and her apartment was in Schöneberg. This project has a lot of landscapes too, a little bit like Die 4 Enden der Stadt. It’s about 90 minutes rough cut now; hopefully it’ll be finished next year.