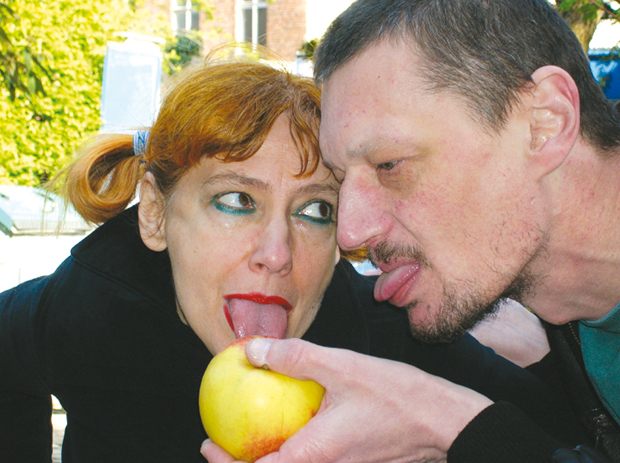 Never being one to stick to conventional cinematic expectations, Carl Andersen proved to be the master of low budget, ‘trash’ films. Andersen’s porno-esque movies brought some wild and wicked sploshing and whipping to theatres until his untimely death last August.

A five time performer in Andersen’s films, Malga Kubiak also takes a starring role in the lo-fi flick, Female Summer, which tells the story of four lesbians and their sexual exploits during a remote getaway. Annaliese Holles has been his movie partner-in-crime for many years.

In commemoration of the man and his work, this month’s EXBlicks will be showcasing Female Summer at the Lichtblick Kino, Monday, October 29 at 8pm, where there will be a Q&A with his cinematic cohort Holles and actress Kubiak.

Carl’s eccentricity is obvious in his films. What was it like working with him?

MALGA: Carl was very intense – a little bit rough but very humorous. He made me believe in movies. I found him a very easy director to work with as previously I had been working as an actress with a French theatre – I had difficulties with the directors, they were very demanding of me.

ANNELIESE: Carl always told me that he really liked you [Malga] because you weren’t like a ‘normal’ actress. People often just read from a script but you brought your own life into it and improvised.

MALGA: Yes, but when you say read from a script you’re mistaken because there was no script.

ANNELIESE: I know there wasn’t a script in his films but what I mean is why it works so well is because you and he had the same spontaneous ideas about the story.

MALGA: Carl had a script, like an idea, but he never had set lines. It was up to me to use my own life and thoughts in the roles. He could hardly have written that.

It’s interesting that his films were so experimental, yet Carl was from a very Catholic background in Vienna.

MALGA: Well when I was in school I was excluded from religious education for drawing a naked Jesus… I forgot the cloth! This was because my cousin showed me his penis and I was curious as a child. So when I was drawing Jesus I just drew him like how a boy looks.

ANNELIESE: [Laughs] Don’t go off the subject, Malga! There’s nothing about religion in Carl’s work and he never wanted to go back to Vienna.

Anneliese, Berlin clearly offered an escape from Vienna. You wrote in Carl’s obituary for Exberliner that Carl’s sets allowed anyone to have sex with whomever they wanted. Did his films become more explicit when he came to Berlin?

ANNELIESE: For me that relates to Carl’s early films. The films he started to make in Vienna were much wilder and after his move to Berlin, you can really see that his style changed completely; it was then more sedate, yet with the same very sexual topic. I think by the time he came to Berlin he had been heavily influenced by director Lothar Lambert, and then when you came on the scene, Malga, it was about the difficulties in having sex and the relationships. Female Summer was far more structured, beforehand it was sexual chaos. But with you Malga, it was much more like a normal film set.

MALGA: I don’t know what a normal film set is! Sounds messy.

Did filming take a long time on Female Summer?

MALGA: No, we were all comfortable about the filming times.

ANNELIESE: But it wasn’t like other film sets. They all tended to live together whilst shooting, like a family. Carl always had the camera on.

MALGA: No, he didn’t! When I worked with Carl he only had a camera on when we worked. He never filmed off set.

ANNELIESE: But it’s an intimate filming period. It’s more intensive than if people go home in the evening. Like with Female Summer, you all stayed together in the cabin.

MALGA: We filmed Lick an Apple Like a Pussy in the same cabin as Female Summer and we never filmed off set.

ANNELIESE: I don’t mean hours I just mean for a few extra minutes. Even if people were having difficulty with the scene then he would keep rolling.

MALGA: You’re wrong! No one had difficulties.

ANNELIESE: Yes, they did. They had to be drunk to do sex scenes sometimes.

MALGA: You weren’t there though.

ANNELIESE: Carl told me that they had to get drunk before the sex scenes, because they were all really embarrassed. This was in Lick an Apple Like a Pussy.

MALGA: I don’t know what Carl told you but this is what I experienced. I was there, Carl was drinking but I wasn’t because I don’t drink when I work and that’s it.

Are there any memorable moments from filming Female Summer?

ANNELIESE: Carl told me stories that so many things went wrong whilst filming. There was an issue with the water.

MALGA: The toilet wasn’t working! But the real difficulty was that one of the actresses had a problem that meant she could faint at any time, we had to have lots of water available. And she liked to drive the van which was worrying.

Were his sets demanding to be on?

ANNELIESE: In the last film a lot of people were complaining because he was very demanding and shouting a lot, especially at the women. I wanted to showcase Female Summer for Exblicks because Carl loved women. But I’ve heard Carl was often shouting at the women.

Didn’t he have a good relationship with women seeing as his films primarily focus on women and sexuality?

MALGA: Carl always said he was “a lesbian trapped in a man’s body” and laugh.

ANNALIESE: My feeling is that he was trying to work out relationships in his films because he always had difficulties in real life. He always had a muse (which was often Malga) and an ideal woman character in his films.