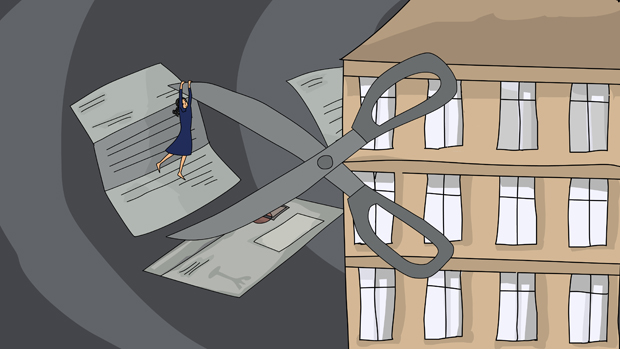 At our next EXBlicks catch Katrin Rothe’s Betongold on August 29, 8:00pm at Lichtblick Kino.

Most of us no longer see gentrification as an abstract debate, but not everyone has seen the phenomenon in the minutia – property concerns disrupting the lives of regular tenants. Documentary filmmaker Katrin Rothe’s tale of urban displacement will come alive on screen in Betongold for EXBlicks on August 29, 8:00pm at Lichtblick Kino. Afterwards Rothe will be sticking around to field question from the audience.

The spark to make this film was your own real life experience with gentrification.

Well, it came right into my living room; I got a notice that my rent was increasing more than 100 percent. So I started to ask neighbours and other people in the area and heard all these crazy stories. I quickly realized that I might have to leave my house. I was just shocked. When I came to Berlin, incredibly high rents were not a problem.

In 1990, right after the Wall fell. And I started out completely rent free, so… You know, that’s why we love Berlin, because it didn’t have these high rents, because we can go by bike everywhere and all that.

It’s not common to put yourself at the centre of the exploration of a phenomenon. Why include yourself?

I wanted to show what it means to lose your home, to be really concrete about what it meant to my neighbours and me. My neighbours were completely normal; it wasn’t only artists and freaks. It was really mixed and everyone had the same story – they needed to go, because the new owners wanted to sell. I had the opportunity to show it from an inside perspective, so I just had to do a documentary. I met the directors of Mietrebellen at one point and it was nice to know that there were people doing films about the movement. I wanted to do something that affects a lot of people in an emotional way.

You could have just used talking heads to recount the encounters with the landlord, but you used animation…

Yeah, then you actually see it. It’s different from just being told what happened; there’s a lot of feeling and subtext. There are the words, but there’s also exchanged looks, the sense of provocation and so on. Animation’s a great art; you can show quite complex things.

So what happened to you after the documentary ended?

Well, when we went to court, the judge gave us two settlement offers: four years with the same rent or €50,000 to leave the flat. So I said “Okay, it’s fine for me to stay with the same rent,” but the landlord wanted me to take the money and leave, he really didn’t want me to stay. I ended up moving out in the end of 2012.

What can be done in real life about the issue?

We need to keep the tenancy laws the way they are and preferably make it even better. We need the politicians to ensure that they can’t just raise the rents through the roof because of modernisation. People can do a lot and they will – it’s deeply entrenched in German society to fight for flats – but a lot of people move out right away, simply because they’re not aware of their rights.

So you’re also trying to let people know that they have certain rights and they should use this right?

I hope so. I want people to know that they still have a right to stay in their flats, that we still have a good tenancy laws in Germany. Our tenancy laws and German law in general are really complicated, so I tried to show things in a way that’s easier to understand. I also tried to give little hints as to what you can do: talk to neighbours, make phone lists, make a website, go to lawyers, share your knowledge and stand united.