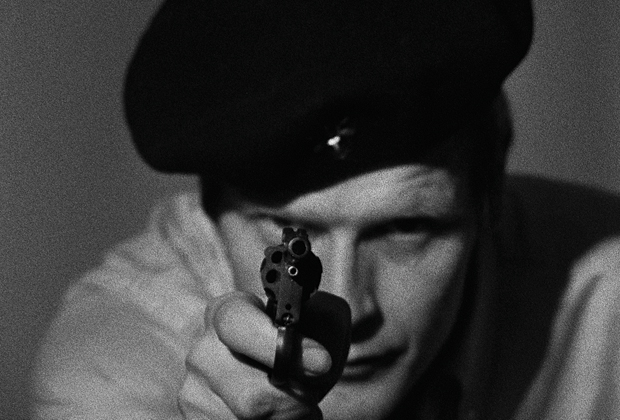 June sees EXBlicks present an RAF evening for cinephiles and politico-junkies alike with a screening of Une Jeunesse Allemande (A German Youth) on Monday, June 15, 8:30 at Lichtblick Kino, followed by a Q&A with filmmaker and RAF expert Gerd Conradt.

Premiering at the 2015 Berlinale, French filmmaker Jean-Gabriel Périot’s documentary Une Jeunesse Allemande tackles well-trodden territory as it disentangles the factors leading to the constitution of the Red Army Faction in the late 1960s using only archival material.

This month we have the special privilege of having Périot’s fellow filmmaker and RAF historical expert in his own right, Gerd Conradt, joining us. On hand for the making of Une Jeunesse Allemande, Conradt went to film school with key RAF member Holger Meins and is the man behind the 2002 documentary Starbuck – Holger Meins, as well as a companion piece to Une Jeunesse Allemande, Video Vertov, which screens the following Wednesday, June 24.

Join us and Conradt for an unmissable EXBlicks, along with a Q&A and complimentary wine.

Can you talk about your relationship to the film?

Well, it was an intensive one. The director [Jean-Gabriel Périot] came to me about five years ago and said he wanted to make a film on Holger Meins. I, of course, went to the DFFB (German Film and Television Academy Berlin) with Meins and had already made a film about him: Starbuck – Holger Meins. So the director asked me where he could find archive material on this subject. Six months later, when he had seen everything and had more questions, we met again. In this way I supported him through the making of the film. On the one hand I was a historical witness, on the other hand I was someone who knew his way around the archives, particularly on this subject.

What was your first reaction when a French filmmaker came to you for this project?

I was surprised. I thought it would be difficult for him to bring another RAF film to the market and to get funding from German TV broadcasters or other organisations. Then I thought it could be an interesting idea, because he had a completely different point of view.

Until now he had made mostly short films and tended to be experimental in his approach. So I actually expected him to use maybe just a small amount of imagery from this time period and put them together in an experimental way, like a musician who composes a piece with a motif.

And how was your reaction when you first saw the film?

When I saw the film properly for the first time at the Berlinale, I cried. I saw so many acquaintances and friends who have passed away, people like Ulrike Meinhof, Holger Meins, Gudrun Ensslin – wonderful people who were just chasing after an idea. That made me very sad. The film made no explicit statement at the end. It just let it be. So for me it’s interesting to see how people who haven’t experienced these events would react to the film. People to whom it’s all ancient history, like the first World War or the Weimar Republic to me. Or the GDR to the younger generation. Therein I definitely see the film’s value.

As a filmmaker yourself, what do you think of Périot’s approach?

It’s quite radical. It’s an attempt to create a portrait of an era solely out of archival materials.  I also find it interesting that he uses a mixture of documentaries and narrative features. He also confronts us Germans with the fact that we have such a rich reserve of materials in the archives. Over, say 60 years, our television has collected so much footage on everything that we actually don’t need to shoot anything new. He had to put in a lot of work just to sort through all that, find what he needed and watch it all.

Can you still learn something new about the history of the RAF by watching a film like this?

I think you definitely learn something new about this time period as a whole, not just the RAF people. In the movie there’s a snippet of a film I made, in color. When I saw it, I thought to myself: “We were quite a crazy bunch back then!” Very courageous and experimental too. A lot of what people thought about, they also just went ahead and did it. We thought: “Oh, we should go have a demonstration today.” And we would just do it. We’d make and distribute flyers. Before you knew it, the marchers would be there already. There was no internet, no cell phones, but there were other ways of communication and there was this readiness to act. The film also shows the creativity of the generation back then. So I think it’s not just about the RAF, but also about that time.

When you see Ulrike Meinhof on this talkshow, for example, you can tell all the other guys were astonished by this attractive, intelligent young woman who was so eloquent about her clear, militant ideas. She’d just sit there and smoke! The film really says something about Germany back then.

Do you think people nowadays talk about the RAF too much or too little?

I think people are too fixated on a few RAF figures. There was the extra-parliamentary opposition movement, the anti-Vietnam War movement, the beginnings of the feminist movement, and the discussions about the justice system. It was completely different back then how one could get arrested and be held in police custody. We had to learn about all these institutions and about how the state worked. We learned that we all had rights, and that we needed to exercise these rights to defend ourselves.