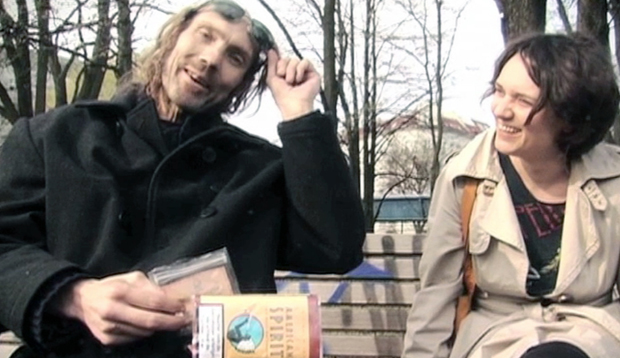 Seen by some as a blasphemous approach to death, Helena Giuffrida’s provocative documentary is a portrait of a dying father and his family’s atypical response to his impending demise. The Italian-born Giuffrida’s poignant farewell note So Glad I Did can be seen on screen at EXBlicks on October 13, 8:30pm at Lichtblick Kino. Afterwards, join Helena Giuffrida and us for a Q&A followed by wine.

Describe your relationship to the film’s subject, Bruno.

I’m Bruno’s ex-wife and the mother of his first son. The original idea was that my son would film it, not me. He was 15 at the time. You don’t really want to hang around with your parents at that age, so I thought it would be more fun for him if he went to see his father with something to do. Whenever he went to visit Bruno during this time, Bruno was always sleeping or in pain and my son didn’t know what to say or do. To help him make a connection with his father through a different channel, I told him to make a movie. He went there with the camera and couldn’t do it: he felt too embarrassed. So I started to film it myself because I had the same problem – I didn’t know how to act when I went to visit Bruno and his family. I was the ex-wife. We only connected again when he was sick and dying. The movie was the perfect channel to allow that reconnection.

Did you feel at all like you were intruding on a very private moment?

Never. First of all, Bruno was a very egocentric person. You can see throughout the film that he liked the camera on him, I could see that. It’s really apparent in the scene with the funeral director. Bruno had no problem whatsoever with me filming this moment and Bruno uses it to make some jokes, because he knew at some point that someone would see it and he didn’t want to disappoint his audience. At one point they were discussing which coffin to buy and Bruno wanted the cheapest one of course, he had little in the way of money, and he joked that a coffin from Aldi would suit him fine. I had to cut out that joke, it was just too much.

Wasn’t it strange for Katka, Bruno’s then-wife, having you there at this time?

It’s an interesting question actually. Katka and I didn’t have a friendship before Bruno got sick. When Bruno’s cancer was first diagnosed, five years before his death, we were already divorced and I got a call from the hospital telling me, “We’ve got your husband here.” I explained that he was my ex-husband, but Bruno believed that he was still covered by my insurance. But since I was the one who received this call, I felt I had to know what was going on and so that was the first time Katka and I started to communicate. Shortly afterwards, Bruno got an operation to remove the tumour in his stomach but two years later it came back, at which point it was completely normal between me and Katka. I’d go to the hospital with her and the kids to share in this moment with them. To share the panic.

You were obviously an important part of Bruno’s life, yet apart from a brief cameo made by your stomach, you play no part in the film. Why is that?

I also appear in one scene where I’m sweeping! I was in the film in the original edit. But then I thought, why am I there? It’s my film, but it’s not a film about me. It’s about Bruno and his family. I only included that scene in which my stomach appears because Bruno looked so funny at that moment.

Bruno certainly had a unique approach to death. How would you describe his personality?

According to everyone who knew him, Bruno was positive, fearless, egocentric, loud and he was very big. Big in physicality but also in personality. When you were in a room with Bruno he seemed to occupy the whole space.

Bruno seemed to touch the lives of many during his life. Can you say whether you personally learned anything from him before the end?

Absolutely! I learned there isn’t enough time for bullshit. Honestly, you spend a lot of time dealing with bullshit from other people and from yourself. Bruno was not a bullshitter and in your final days there is no place for bullshit. Death isn’t something you can pretend away, you have to face the truth straight on.