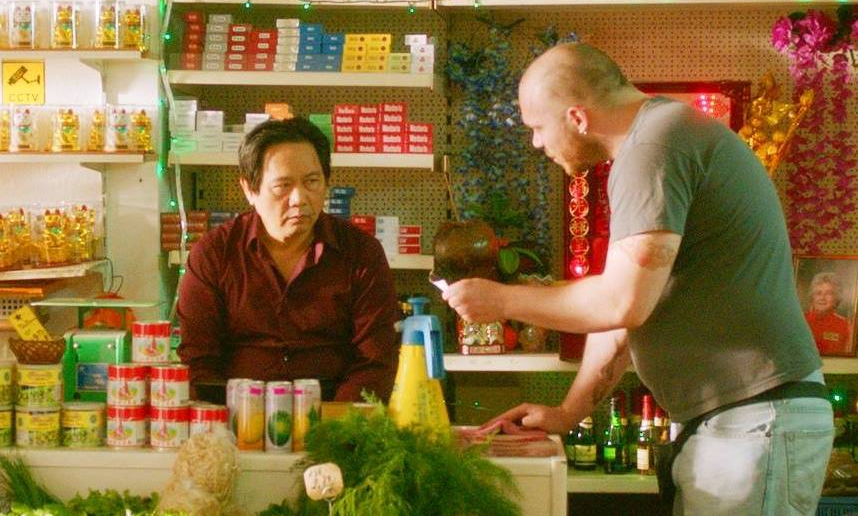 If you’ve ever alighted one of the three tram lines on the corner of Schönhauser Allee and Bornholmer Str., then you’ve already walked by the inspiration for Duc Ngo Ngoc’s short film, “Obst und Gemüse”. Ngoc’s semi-fictional tale is a funny and moving portrait of fruit and veggie shop employee Harry, a Sterni-drinking, FC-Union-supporting Berliner, and (fictional) Duc’s Vietnamese father Herr Nguyen, the shop owner who’s been here since the GDR – and their (at first uneasy) cooperation. Catch the EXBlicks screening of “Obst und Gemüse”, along with a second short from Ngoc, on March 26, 8:30pm at Lichtblick Kino, followed by a Q&A.

Is the fruit and vegetable shop in the film the actual shop?

Yeah! It’s my parents’ shop. We’ve owned it for ages. I grew up in this shop and I worked there a lot. Eventually, I moved away to Weimar to study, which is a bit further away, and my parents needed help there.

How much of the film is based on your own experiences?

The story is inspired by real life, but as I didn’t write the script myself, the characters have been changed and exaggerated. For example, the dad plays guitar and the son wants to open a fitness studio – I’m not so much into fitness! Harry is a lot harder in the film than he is in real life. This isn’t just to enhance the dramaturgy of the film, but to make this “culture clash” between the characters more apparent. So it’s a very personal film, but it’s not my story. I did go away for three months and come back to see a German employee in our Asian shop though.

So a real-life Harry?

A Harry, exactly. He was the inspirational figure for this film. I found it funny [to see him working at the shop], but also a little weird as I knew my parents, and I knew “Harry” as he was a regular customer of ours; he would always buy his beer from us every day and understood us well. He had some questionable views, but he’s a very likeable guy. He’d been in a fight with a Turkish guy and so kind of had his mind made up about Ausländer; Prenzlauer Berg was his place and he wouldn’t go to Neukölln or Kreuzberg. I found it funny though that he worked in our shop, essentially saying, ‘The Vietnamese are totally okay, but I don’t like Turkish people.’ The real Harry doesn’t work for us anymore, but he still comes to buy beer from us. We’ve still got a good relationship with him.

How did your father end up with a fruit and vegetable shop in Prenzlauer Berg in the first place?

My father came to [East] Germany in 1988 and worked for a rail company as part of the rail crew. So many were out of a job when the Wall came down, and a lot of people had to start working for themselves. My father moved to Prenzlauer Berg because the rents were so low… it wasn’t the Prenzlauer Berg of today. His first flat cost, I think, around 100 D-Marks and that was for a three-room flat; I think nowadays that flat would cost around €1200. That really shows how much this district has changed, and I wanted to show that through this film. You notice that people who used to live there don’t live there anymore because they can no longer afford it; a few still live there though and this includes the two main characters in my film – they’re kind of like old relics from the earlier days of Prenzlauer Berg.

As well as this development of Prenzlauer Berg into an expensive and somewhat unaffordable district, what was the most important thing for you to show in this film?