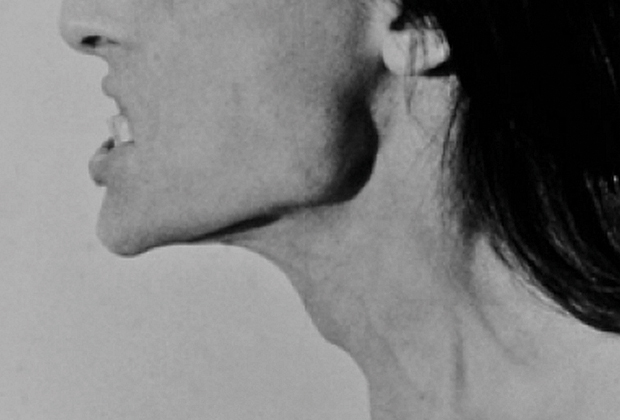 OKAY OKAY – Der moderne Tanz delves into the zeitgeist of 1980 West Berlin, with urban decay vibrating to songs by Pere Ubu, The Residents, Ultravox, among others. Beautifully shot Wire footage and a one-man rooftop show from the best dancer at SO36 are reasons not to miss this month’s EXBlicks. The 90-minute pre-MTV music video screens at Lichtblick Kino on Monday, November 17, 8:30pm.

A man hangs upside down from a crane at Kottbusser Tor, circling the newly constructed apartment buildings to a bombastic song by the avant-garde group The Residents: “Okay? Okay? Okay! Okay!” The final scene in OKAY OKAY – Der moderne Tanz (1980) provides the title to a film where most dancing is performed by pulsating lampposts, smashed windows and cars under demolition. Don’t miss the original debut of Christoph Dreher and Heiner Mühlenbrock and meet the directors, who made the film while still students at the German Film and Television Academy in Berlin.

You started off filming a Wire gig at SO36. Did you have an idea about where you were heading from there? I mean, the film has no obvious story…

Heiner Mühlenbrock: We didn’t try to make a documentary or fiction. There was no genre for what we did, really. But in a way the music and the lyrics were the dialogue.

Christoph Dreher: For me it was basically about synaesthesia. The effort was to have the maximum relationship between music and pictures, and to have a mutually reinforcing relationship. It was a kind of experiment, how to do that. We tried out different methods, like filming out of a driving car, with different lenses. We often listened to the music while filming, and we found out that if the picture was too stable and clean it didn’t connect to the music.

HM: The music tells you the rhythm for the camera movement. We filmed with 16mm in the Ruhr area and were unsatisfied, the pictures didn’t live enough for the music. So we went back to experiment with Super 8, and it somehow fit.

The film is shot in West Berlin and the Ruhrgebiet in North Rhine-Westphalia. You weren’t at all interesting in filming the East?

HM: No. We didn’t want to show the obvious stuff. We didn’t drive near the Wall, for instance. Our focus was the situation we were in.

CD: It had nothing to do with the Wall really. It wasn’t interesting for us. It was for tourists. We were West Berliners.

HM: They had made us an island, a rotten island…

CD: Nobody else wanted to be here. The rest of West Germany thought West Berlin was too poor, frightening almost, dangerous maybe… So tourism was kept at a very small scale. That was the situation. You had basically Turkish people, artists and students.

So, how did you find West Berlin? I mean, the film is quite dark, with all these empty streets, broken houses and very few people. The atmosphere is post-apocalyptic, mostly…

HM: It was great!

CD: Just fucking great! We had this cheap loft [where their friend Nick Cave also lived for a while], central heating, a shower, and we could basically do whatever we liked. There were lots of creative people here. Of course it was on the one hand kind of depressing here, in winter especially. I mean now you have all theses trees and plants – they were all planted later, basically.

CD: It’s from the Bruno Taut house right on that corner [pointing across Oranienplatz], the Bauhaus house.

And who is the dancer?

CD: Punk Paule. He was almost every night at SO36 dancing; he was the best punk dancer. Actually when I was writing my thesis, I went to SO36 every night for a couple of weeks, and sometimes we were only two people there, Punk Paule and me. We obviously had to ask him. You know, people weren’t dancing that much, everyone else was just jumping up and down, as punks did. He was the only one who did something like a dance.

CD: Certainly not at the time.

Another scene, with the solidarity concert outside a prison, really sticks out from the rest of the film – it’s like a documentary all of a sudden. Why did you want that in?

CD: It came out of the situation of Berlin and has its base in music, it was something very special that people weren’t just demonstrating but playing a concert. We weren’t really interested in German music at that time. The Ätztussis were our friends, but more from the political side. We wanted some kind of political statement, in between these more aesthetic sequences.

Where did you screen the film, and how did the audience react?

CD: The school paid for a trip for us to try showing the film at a film festival in San Francisco, and while we were in the States we organised screenings in Chicago, Los Angeles and New York as well.

HM: I thought they would laugh about our film. They had skyscrapers and we had this one modern building in Wedding… Many of them really loved it, though!

CD: I would say there was a smaller group of people who really loved this film, to the degree that some people said it changed their lives… but most of the people totally rejected it. It wasn’t accepted at film festivals, the experimental film scene hated it, because it had too much music. It was too enjoyable in a way. Not annoying enough, maybe?

HM: Here in Berlin we had no success. I remember we tried to get into the film festival here, and they wouldn’t take it.

CD: Well, it was actually like a local hit for a while, shown at Eiszeit, and sold out every night – but that was 10 years later.

You were in your late twenties when you made Okay Okay. How do you feel about it today?

CD: It was a really great experience, very important. And of course very nice that it was rediscovered four years ago. They had this programme of West Berlin films at Arsenal, and [co-director] Stefanie Schulte Strathaus thought our film was really interesting in the context and programmed it for a year or something, every week. That was of course a late satisfaction.

HM: Looking through your own stuff, you’re sometimes a bit ashamed, like when looking at old pictures or so, but with this film I have the feeling that it never gets really old. It’s strange, it’s 35 years old, but even the music doesn’t feel old. That’s interesting.