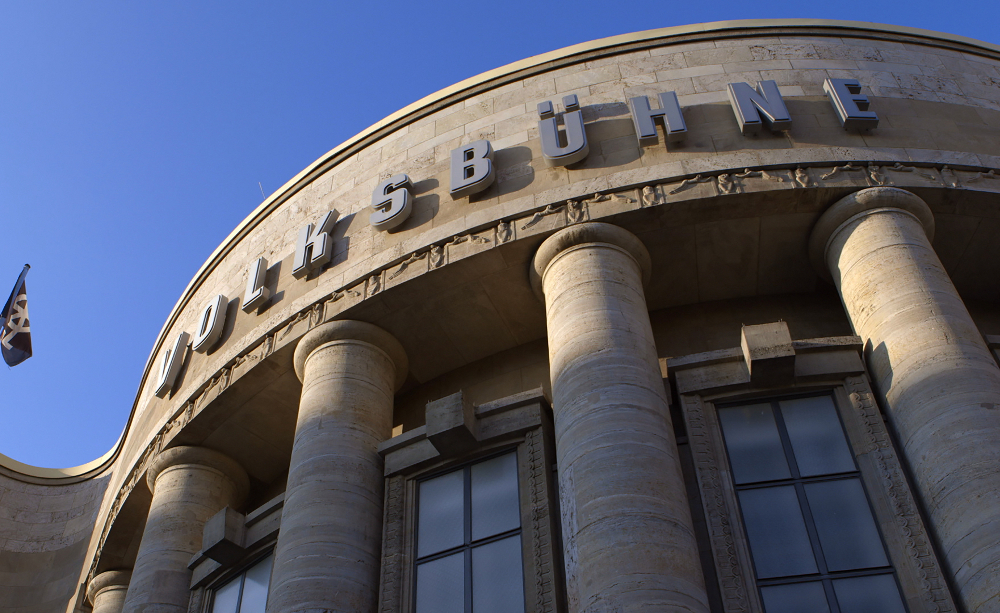 Director Adama Ulrich on Partisan, the film tribute to Berlin’s most iconic theatre she co-authored. Catch it at our next EXBlicks on Mon, May 28 at Lichtblick Kino.

No matter what your opinion of Frank Castorf, Chris Dercon, repertory theatre, state subsidies, neoliberalism, or the future of Europe, one thing is for sure: the Castorf Volksbühne was a juggernaut. The Berlinale documentary, Partisan, is a love poem to the quarter century that was the Castorf Volksbühne: its actors, directors, crew, the space itself and the aesthetic language developed there. Filmmakers Lutz Pehnert, Matthias Ehlert, and Adama Ulrich show that these clichés of the Castorf era – the chaos, the screaming, the “butchered” texts, videography, fights in rehearsal, the nudity and fake blood – are all part of a unique theatrical language developed on Rosa-Luxemburg-Platz. Ulrich hopes they aren’t lost forever.

Why did you make this film?

All three of us are big fans of the Volksbühne. I went there for the first time in the 1980s before reunification, when directors like Heiner Muller were there. What an interesting aesthetic! I had never seen anything like it. It was amazing. This continued with Frank Castorf, Rene Pollesch, Christoph Marthaler. When we learned that this era would come to an end, we decided to do this documentary about the Volksbühne from 1992 to July 1, 2017, just to create a document for people who didn’t experience this period.

Why did you decide not to include the drama surrounding Dercon’s appointment?

Dercon is gone now, right? Ha! We’re so happy that we didn’t put the focus on the political decision and Chris Dercon. Otherwise our documentary would already be history. We just thought –1992 to 2017, 25 years, it’s a good figure, a quarter century. It felt right.

For me, it was a scandal that somebody like (former senator for culture) Tim Renner and also Klaus Wowereit and now Michael Müller made the decision. Of course this is not just my opinion. You could say “poor Dercon,” the poor but so vain Dercon, who didn’t even know what the Volksbühne really was. When he got a call from Renner offering him the position, he just said, “Yes, I can do that!” When he opened his Berlin office in 2016 and realised (senator for culture) Klaus Lederer didn’t want him there, nor the people working in the Volksbühne, nor the audience, that is when he should have stopped and thought, “Well, maybe I’m not the right person”. But it is primarily the fault of the politicians. It is a big political scandal to destroy such a great theatre.

The film avoids sheer sycophancy and even shows the chaos, the feuds and even Castorf’s famous fits. Was it difficult to keep a balance?

We just showed it like it was. Of course, the film is something like a declaration of love. But we also wanted to show the problems. Twenty-five years is a long time for one director who was responsible for everything. So we tried not to just say, “Everything was so fantastic.” There were crises, like in 2008-2009 when directors and actors left and nobody really knew what to do. We were lucky to have all the archival materials.

Some say that the ongoing scandal will kill the Volksbühne. Do you agree?

No, I hope now it will all get better. Now we can bring back some of the actors and directors from before. It is very good that Dercon is going. Too late, but okay.

But what about the quote from Die Welt read aloud at the end of the documentary: “It is enough. Twenty five years is a long time… Do we want to be told what the avant-garde is by people who are so old that they snorted coke in the ruins of the East after the fall of the Berlin Wall?”

There was always something new at the Volksbühne! There were so many directors there, it was diverse. It was not “enough”. I put this text in the documentary because it was very typical of one side of the debate. But, no, I don’t agree with it.