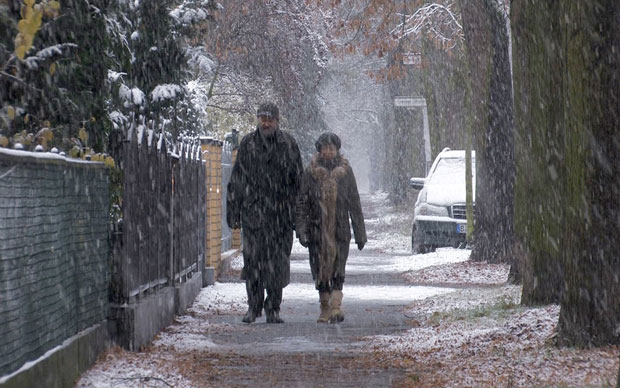 This month’s EXBlicks screening of The City Named Desire takes place on February 24 at 8pm, followed by a Q&A session with the director along with complimentary wine and refreshment.

Peter Zach’s documentary The City Named Desire takes its audience on a pilgrimage through the city, picking up threads of conversations between internationally renowned artists on their experiences of Berlin pre-Mauerfall. In between the stories, Zach explores the city by car, boat and S-Bahn, capturing the architecture and sights of a city in motion and perfectly reflecting the notion that Berlin is not in stasis but in constant flux – albeit not always in a good direction. The film’s steady pace and honest feel combine to create a lasting reflection of change.

How did the goal of combining all these stories come about?

I started with the DAAD [Berlin Artists-in-Residence Programme] for portraits of artists involved with an exhibition at Brandenburg Gate called Beyond the Wall and this led us to the idea of making a film with more artists. The idea to connect this film to the 50 years of Berlin development after the War eventually came about. Then we brought in more artists, and that’s how we decided to do this montage style, but it was difficult at times. The clip in the beginning is actually filmed from the first flight of the Americans after of the War over the Brandenburg Gate.

Between and during conversations with artists you use clips of Berlin’s sights and architecture in motion – from a car, the S-Bahn, etc. A metaphor for a city in motion?

No, it’s not on purpose. In terms of metaphor… the theme of the film is actually Liza Lim’s story about [Walter] Benjamin’s angel. This angel is not flying with his eyes looking in front of him, he’s moving and his face is turned towards the past; he’s the passerby and this is the metaphor I wanted to show.

Having done this film, what’s your personal take on the city and where it’s heading?

Twenty years ago when I made the film Aus der Mitte, it was an exciting area and most of the East Berliners left to West Berlin and you could move into flats and just live there. That was really a breaking-up of Berlin: everybody thought it was going towards a direction that’s artful, a kind of post-hippy time, but that changed quite soon. Ten years after all the buildings were sold, they started to renovate, and by the beginning of 2000 it was completely different. And it’s not the best way to change; it’s not the city I expected it to turn into. What made Berlin special in the 1970s and the 1980s is the underground culture, a culture not existing anymore. It’s more entertainment business and it’s not so exciting. There used to be Monday, Tuesday, Wednesday, Thursday, Friday bars and you knew which bar was open. You could do whatever you want, it was quite free, and that’s where I expected the city to go.

It’ll probably become a city like London, Paris, where it’s quite expensive. When the money comes in, everything vanishes. What makes the city alive and vivid – that elixir of the city – is being lost. I’m not sure. But maybe in 20 years… it’ll really be like London and you won’t be able to afford to live here.

Do you agree with Andrew Horn when he refers the reaction of Germans today to reunification as “amnesia”?

I completely agree with him. I knew Andy from his first film which was shown in the Berlinale. He knows about all these changing times, from the mid-1980s to the 1990s to the fall of the Wall and he also told a lot of funny stories about the wall and his experiences with it.