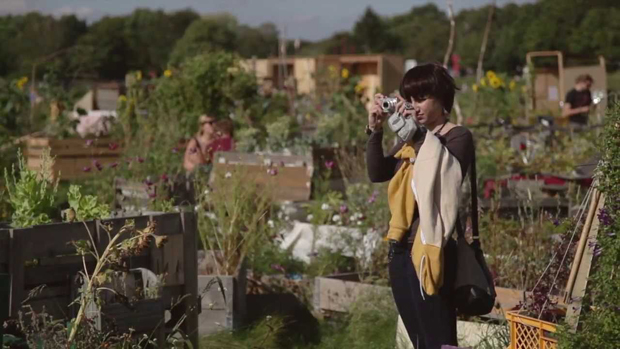 In Teresa Beck’s documentary Speaking Gardens, produced alongside cameraman and partner René Reichelt, the filmmaker and artist took a lyrical look at six urban gardening projects around Berlin. The film casts an aesthetic eye on the progenitors and plans behind gardens from Görli to Hohenschönhausen. All you greenies and doco lovers can catch Beck and Reichelt at the next EXBlicks, in cooperation with realeyz.tv, at 8:30pm on Tuesday, February 24 at Lichtblick Kino.

What led to Speaking Gardens?

I did a lot of research about urban gardening projects. There’s a big community in Berlin, so I met some people and had a lot of good discussions. I wanted to make a film about it to show the diversity of these projects, the people who work in them and have their own visions.

How did you choose which gardens to include?

It was quite difficult to choose six. I wanted to select projects from different areas, and show different kinds – community gardens like the Prinzessinnengarten who make money with the garden, like an urban farm project. Then you have Görli’s fruit tree project, which is really different. Or in the north, where they work together in an apartment block complex, and a housing company supports them.

Is there much demand for gardening spots?

In Tempelhof they have a waiting list of a year or more. In other places like in Lichtenberg or Hohenschönhausen – I think it’s a newer idea to work together in a garden. There’s this culture where everybody has their own gardens…

Allotments, yeah. So there the new movement is quite different for them. I think in the 1950s, allotments were used out of necessity, to grow your own food. And then it changed a bit in East Germany – people had their own garden to be independent of the system, to have their own things. In the East I think it’s in the culture to have these allotments.

Somewhere you can do your thing. Does that differ from the urban gardening of Speaking Gardens?

In my opinion these projects are more open – most have no fences. There’s also a lot of teaching, meetings and workshops where you can learn. Also, people are looking for a community – that was also an aspect of the older movement, but I think these days, when people feel anonymous, it’s like searching for a neighbourhood who do things together. You often have one bed where a group of gardeners share the costs. People also want to know where their food comes from.

Do you think there’s a way to balance to the desire for more urban gardens with the need for more affordable housing in Berlin?

You have to combine the two. The future would be rooftop gardens in my opinion – if there’s no space to grow below, you have to go to the top! I think it also promotes community – the people who live in the building work together or on the roof. The Mörchenpark project near Holzmarktstraße is the future of planning for me – they want to build new houses, with an integrated garden, and also a park.

Are there already successful rooftop gardens?

The most important is Klunkerkranich, on the rooftop of the shopping centre in Neukölln, with a bar and restaurant.

Do you think it might be easier to have a relationship with private companies to create or secure gardens?

If you see that Nokia has this rooftop garden, it’s like advertising – “We are so good, we have a rooftop garden now.” I don’t really like this kind of marketing. New York is the best example of restaurants working together with gardens.

Do many urban gardens already work with a business?

The best example is Prinzessinnengarten. They have a café where you can buy food, and you can also buy plants and soil. There’s one restaurant with its own garden in Neukölln, Café Botanico (http://www.cafe-botanico.de/) in Rixdorf. They are little places and you have to know them.

Do people ever dismiss the idea of urban gardening, as a hippie or middle-class Bio-Mutti thing?

It’s true that the people who organise these gardens come more from the middle class – perhaps it’s because it’s difficult to organise. You have to write long applications in German, you have to know your rights and discuss things with the Grünflächenamt, and you need enough money to get it off the ground. But if you look at the people who participate, they come from everywhere.

Is there much exchange between bigger organic farms and urban gardens?

In the Tempelhof gardens, there are days where organic farmers visit to show their projects and sell their products. It’s also to show that there are farms with a system where you can buy boxes of produce – it’s advertising for them.

So anyone who’s failed in their garden can still bring home food!

It’s also for people who don’t have time to go to a garden and grow their own food – they can ask the farm for a box. Sometimes people don’t trust ‘organic’ labels, because they don’t have a relationship with the farms – if you know the farms who produce things ecologically, you trust the products.

What do people get from a garden?

Most of the people I met were more satisfied – perhaps because of the contact with nature and the aesthetic aspect of the garden. That’s what I wanted to capture in the film. It affected me – I feel so good in a garden! Sometimes people say the film is too positive. It’s not a critical film, but it’s not a commercial either. It’s more a film to show my feelings and how I see the gardens aesthetically. The film is meant to inspire, to say: “Why not change something?”