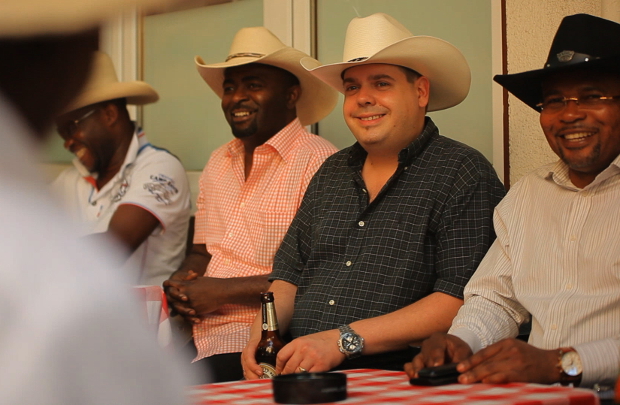 Sandwiched between Müllerstraße, Seestraße and Volkspark Rehberge, the Afrikanisches Viertel (African Quarter) in Wedding is far from Berlin’s most glamorous Kiez. But fascinating stories lurk behind the neglected neighbourhood’s façade, and a new life has sprung up in the past few years. Documentary filmmaker Martin Helmbrecht, himself a resident for 10 years, charts the rebirth in his documentary series Müller Ecke Afrika, giving residents of the area the chance to relate their stories and impressions of its past, present and future in four roughly 15-minute episodes. EXBlicks and realeyz.tv invite you to come get to know the African Quarter at our screening of the series at 8:30pm next Monday, January 18. Drinks and a Q&A with Helmbrecht to follow.

You were living in the African Quarter when you came up with the idea for this series – what was the trigger?

When I first moved there, it was a pretty sad area. There were a lot of empty storefronts, there just wasn’t much going on. But that changed quite noticeably. I think it had to do with the city declaring a Sanierungsgebiet (redevelopment area) from Leopoldplatz along Müllerstraße up through the African Quarter. It was conspicuous how many new stores were opening, bars and Kneipen too, and living there you could really feel the new sense of life.

I started noticing it in 2013. I wouldn’t usually spend much time in the area, but then I noticed I could stroll around and see something new here, something new over there… That piqued my interest. The other thing that happened was that a large, time-consuming assignment I had was cancelled. Of course that means you have to look for other ways to earn money, but it also suddenly gave me a lot of free time. And I realised there was interesting material right outside my front door!

I also wanted to avoid making a mistake I’ve seen among friends and colleagues where they bite off more than they can chew, trying to single-handedly create this big, long, ambitious documentary. I wanted to do this on my own and not lose momentum by embroiling myself in endless contracts and meetings to try and drum up funds. It was right outside my door and I already had a cameraman who was interested in participating – everything was ready, so I just did it.

Was it easy to find your subjects? How did you approach them?

The first three protagonists I found pretty quickly. Rob (photo) from the Western store [from the first episode] was in it from the beginning. And I had taken a tour led by Israel, the second episode’s protagonist, and the thought immediately struck me to make the area’s colonial background a central theme. I wanted a second participant for that episode, and Mboro had been suggested to me as somebody who would fit, but I couldn’t reach him for a while because he was at home in Africa, attending his father’s funeral. But once he got back, things went very quickly.

As for Bakri and his FLOP Bar [the third episode], that was a coincidence. There’s a little local newspaper, Ecke Müllerstraße, which had an interview with him about how he wanted to open a music bar and create a hotspot for culture. That caught my eye and I thought “Well, that’s perfect!” So I approached him and he was immediately willing. We decided to premiere the first three parts at his bar, and the place was jam-packed. There were people outside who literally couldn’t squeeze in, the response was fantastic! I’m used to making promotional films and instructional videos where you get little feedback and no screenings, so it was really cool just to see an audience sitting there, invested in my film and actually applauding at the end! It inspired us to both make more episodes and organise more screenings.

Your approach to the episodes is interesting – rather than interviewing the protagonists, you just point the camera at them and let them talk. Why did you take that route?

That the people speak themselves is an important principle for the entire film. It distances my work from typical television. I don’t want to impose my own authority onto these stories or bring any external interpretations into them. Living in a city, we’re surrounded by millions of neighbours whom we never get to know, but if you just go up to people and listen to what they have to say, there’s countless interesting stories there. I don’t try to put them into perspective or tie them into a commentary of my own or anything like that. Of course I have to gather everything together and edit it to a certain degree, but in the end it’s just them telling their own stories.

Are you planning on shooting more episodes?

Yes, and we have shot some material already. We’ve got one episode about the refugee initiative “Flüchtlinge Willkommen”, which assigns refugees to WGs and families with space. And another is about the City Kino Wedding, which is getting more and more successful and where we premiered the fourth episode of Müller Ecke Afrika to another packed house. We still need to shoot more, and unfortunately it’s gotten bogged down a bit by personal matters, so I haven’t made much progress in the last few weeks. But it’s coming for sure!