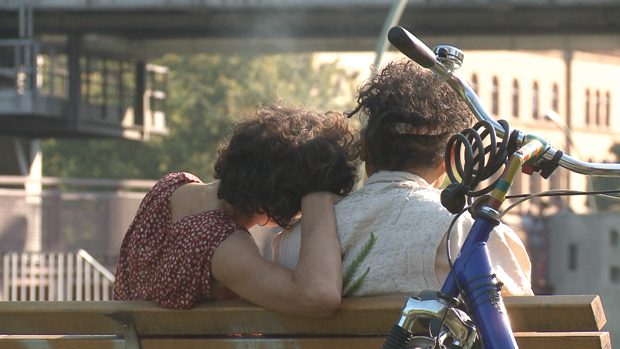 Catch our next EXBlicks on Monday, June 9 at 8:30pm at Lichtblick Kino followed by a director Q&A and complimentary wine.

An ode to energy, humour and endurance, Wiener Ecke Manteuffel tells the true Berlin love story of Dijana and Pat, who fell in love at the corner of Wiener Straße and Manteuffelstraße in 1991. They have since lived out what would be considered an ideal Kreuzberg love, except for the fact that they have both been diagnosed with AIDS. A production of the Hochschule für Film und Fernsehen Konrad Wolf (HFF Potsdam) where director Florian Schewe, cinematographer Yannick Bonica and producer Katrin Droese all studied, and winner of Achtung Berlin’s best documentary award, viewers are in for a romantic and heartwrenching treat.

What inspired you to make this film?

Yannick (cinematographer) did his civil service with Pat 19 years ago. They have continued to stay close friends ever since. I, on the other hand, met Yannick in film school. Towards the end of our studies, we one day came up with the idea to make a documentary about Pat. We thought it was amazing that he had this disease and that he was so positive and had such a great disposition about life.

So the film originally was conceived to be only about Pat, but later you decided to make it a film about both Pat and Dijana. How did she come into the film?

It just became clear that it was such a love story with them. It was a process, though, because we were always on-and-off filming throughout the duration of three years. After filming Pat for a while, it was apparent that Dijana had to be included and that we needed to shift the focus onto both of them. They were inseparable and so entwined with each other. They really have a true love.

Was it difficult for the film to feel complete?

There was no clear point to it at first. Over time we realised that we had a lot of material and that we had to decide on a time to stop filming. It really came together once we filmed Pat re-uniting with his family, because it was clear that this was a big element of the film. Then, when Pat finally moved to his new apartment, we knew it was right time to end there because it was Pat’s transition from an old life to his next positive stage.

What were Pat and Dijana’s feelings on the documentary?

Pat was fine with the idea of the documentary. He doesn’t shy away from his story. Dijana had some stronger reservations because it isn’t in her nature to be in the spotlight. For her, it was a process to let herself be open and trusting enough to let us to be in her life with the camera. And to trust that we would not portray her in a bad light.

How did you make sure to respect the couple’s boundaries with their privacy?

This was a major learning experience for me and something that I reflected on quite a bit. It is hard in these days with television and with people always exposing themselves. We never wanted to expose the entirety of the couple’s lives for the world to see. It was more about telling their story. We always wanted to find that balance, and were constantly working on never crossing the line while editing. We had to cut things out that were very inclusive to their private lives. For example, we would never film scenes of Pat waking up.

What is the biggest theme that you wanted to convey to your audiences?

It fascinated me that they both have this life spirit in themselves. Looking at them from the outside, they have every reason to be negative and complain, but they are never negative. They have more energy, happiness and life force going through them than most regular people that I meet.

I questioned how I would have dealt with Pat’s circumstances. If I had contracted HIV in 1981 and didn’t know the name of it or even what it really was, and then receiving the verdict that I would die, how would have I dealt with that? What would have been my strategy?

Their warmth, energy, openness and positive energy towards life is incredible. I loved that they kept that and didn’t close off and get depressed. That is the whole point of the movie. Two normal people living in Berlin with their story. It is really inspiring and I thought it was worth it to tell other people their story.

There is a huge back story to his bicycle that isn’t included in the film. When he got on a bike for the first time, it was without training wheels, and his abusive step father threatened that if Pat didn’t ride the bike he would hit Pat. So in that moment, Pat rode that bike and this was always a defining moment for him. He was also one of the first bike messengers in Berlin in the 1980s. He always took long bike rides and when he met Dijana he would take her for long rides. So he has a very strong connection to his bike. After he fell into a coma in 1996 and had his hips replaced, he couldn’t ride a normal bike. So now, after all those years, he just wants to get back to his normal bike. That’s why we include the scene of him trying to ride a regular two-wheeled bike instead of his tricycle. His bicycle is a symbol of freedom, self-determination and getting back to normal.