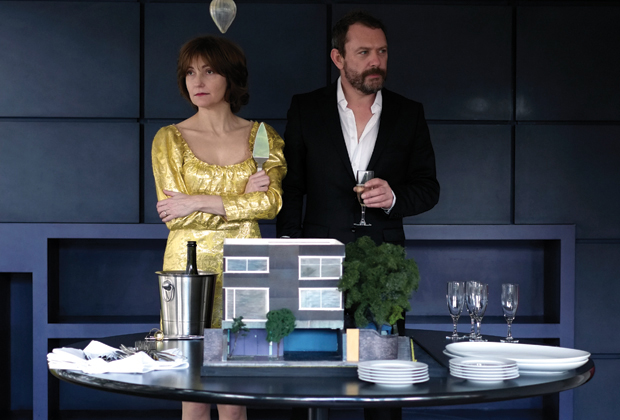 A surreal drama about a couple trying to sell their London townhouse, the film moves towards a less linear narrative structure to give audiences more freedom of interpretation.

Your film plays with the concepts of ‘exhibition’ and ‘exhibitionism’ as well as film as an art installation. How did that develop?

The fact that this film was about this play between exhibition and exhibitionism became clearer to me when we were editing. Up until that point, I was focusing on the idea of the house, which is like a gallery space too – a container for all the ideas, the dreams and the memories, the life of this married couple.

You suggest visually that the house in Exhibition could be a prison. What else might it be?

A prison, but also a haven: a place to escape to and to feel safe in. I was always interested in the idea of the house and the main female character becoming part of the house, almost like she’s becoming part of the architecture. But yes, she is also trying to leave the confines of the house. In a way, she is in a relationship with it. That’s an easier relationship for her than the relationship with her husband. With the house, they sort of melt into each other. They become the same thing. I was always interested in the story about the three characters, or maybe you could even say one character: the house. The house is the main character, the main idea, and everything else exists within that.

In contrast to earlier films, you’ve used a lot of dream and recollection imagery, almost like ghosts intruding into reality.

This was something I was experimenting with for the first time. I was challenging myself to work with a less linear structure, but also to incorporate dreams and memories. It was the house itself that sort of provided me with the idea. My earlier films seem more real but actually this one feels like a more realistic depiction of my own life: how one is constantly dreaming and remembering but is also in the present moment as well.

Does your use of those images change the film’s relationship with the spectator?

Yes. What I discovered is that it is more challenging for the audience to enter that space and to understand it, so I often get responses such as, “I sort of don’t get it” or “I am kind of not in there”. But I also get the opposite response. There doesn’t seem to be a mid-way point. I have to accept that. But because it is less linear as a story, I think the audience finds that more difficult to see.

You explore women’s sexuality in such a subtle way – something more female filmmakers should be allowed to do.

It’s important that there should be more female filmmakers. But I have to say that I think less about being a female filmmaker now than when I was directing television, working with male crews. Having done that for 12 years, I came out determined to feel safe in an environment of my own making. I think about it in a more political way: in terms of how many women assist men in making films. I want to encourage more women to find their own voices.