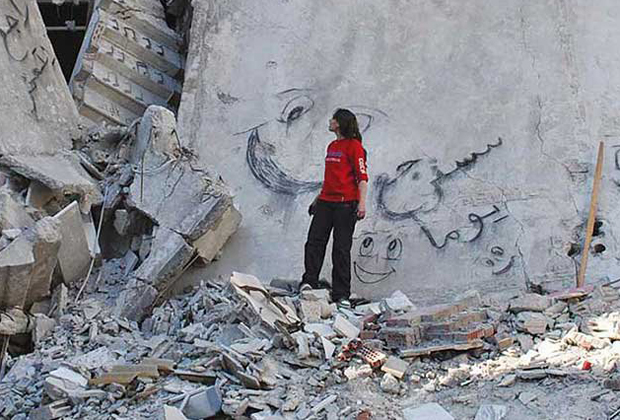 Exberliner celebrates its September cover theme with a very special instalment of our Exblicks film series: three documentaries, each showing a unique facet of exile politics on film.

The mini-fest kicks off on September 7 with Ossama Mohammed’s Silvered Water, Syria Self-Portrait (Eau Argentée, Syrie autoportait, photo), an arresting reflection on the atrocities of the Syrian civil war. It is also a beautiful film about guilt and exile, as Mohammed the veteran filmmaker working from the safety of his Paris exile receives daily footage from a young Kurdish teacher trapped in the besieged city of Holms (Wiam Simav Bedirxan, who shared the credits of the film). Her footage, interwoven with disturbing Youtube videos from anonymous Syrians, documents a dystopian reality of tortured men, oppressed women and orphaned children. Ultimately the film is a testament to physical courage – that of Bedirxan, camera in hand, still shooting in her battlefield city – but also to the moral courage of the filmmaker, laying bare the uncertainty, fear and helplessness plaguing him in the face of the horrors ravaging his country. Silvered Water, which received a standing ovation in Cannes and became a word-of-mouth success in France, still hasn’t found a distributor in Germany – so this is a unique opportunity!

Next is part-time Berliner Laura Poitras’ Citizenfour (Sep 14), the Oscar-winning documentation of those five days of confinement in a Hong Kong hotel room immediately before and after Edward Snowden’s release of the confidential NSA documents that would shake the world.

Finally, the German capital’s community of young, politically active Iranian refugees, along with those in other European cities, is explored in Moslem Mansouri’s documentary Rebel Generation (Sep 21).

If you miss a date, all three films will be screened again back-to-back on September 26! As usual, it’s co-curated by realeyz.tv, all in OV with English subtitles and followed by Q&As and a complimentary glass of wine in Lichtblick’s friendly lobby.