We’ve all seen her Fantastic Mr. Fox and her Japanese characters in Isle of Dogs, but who knows the artist who birthed them? Félicie Haymoz on drawing for stop motion, working with Wes Anderson and why she chose Brooklyn over Berlin as a base for her booming career.

As the drawing hand behind the puppet protagonists of Wes Anderson’s Fantastic Mr. Fox (2009) and Isle of Dogs (2018), Félicie Haymoz is among the most talented and successful character designers of her generation. The Brooklyn-based Swiss artist will be in Berlin as one of the star guests of this year’s Pictoplasma, speaking at the symposium and exhibiting as one of the 11 festival artists. Catch her solo show at Whiteconcepts gallery for a unique glimpse of the creative process behind Isle of Dogs, with original drawings and sketches as well as two of the stop motion puppets featured in the film.

How does one get commissioned by Wes Anderson to draw all the stop motion characters of his films?

I got super lucky! I’d first worked on a Swiss animation film, also stop motion, called Max & Co, and the puppets for that film were made in the amazing studio of Mackinnon & Saunders, in Manchester. When they got hired by Wes for Fantastic Mr. Fox, they said they knew this Swiss designer… They just recommended me!

Can you explain what you do as a character designer?

I usually get a script, and from there I imagine what the characters should look like. I draw the illustrations, with input from both the director and producer. For Mr. Fox, they sent me pictures of stuffed foxes and George Clooney, the voice of Mr. Fox, and told me the character should look like both! I spent weeks trying to figure out how to do that – I was dreaming about foxes! In the end Wes liked one of my designs of Mrs. Fox and they sent me more characters to work on – first the animals, then the humans as well.

How many drafts did you have to come up with for each character?

For some, like Rat in Mr. Fox, my first drawing went directly to the people building the puppets. For other designs, like the outfits of Mr. and Mrs. Fox, it took many attempts. Wes was never totally happy with any of the options I sent him. We spent a lot of time on small details, like Mrs. Fox’s dress pattern and her little brooch.

How did you get involved with Isle of Dogs?

Wes likes to work with the same team, so I just got a call from the producers asking me what I was doing next week. That was a surprise, I didn’t think that I’d get another job as great as Mr. Fox. I started working on the designs in 2015 and it took almost a year. There were a lot of characters to draw! By the end, the process of building the sets and animation tests had started. I think the whole production took three years.

So what kind of references did Wes Anderson give you this time?

We had a big archive with a lot of movies that Wes thought were relevant, such as Kurosawa and Studio Ghibli films. For some of the characters, I even got very specific references – Professor Watanabe and Mayor Kobayashi are based on Kurosawa’s actors. He really wanted Mayor Kobayashi to look exactly like the Japanese actor Toshiro Mifune.

In Mr. Fox you knew from the beginning you were designing George Clooney’s character. In the case of Isle of Dogs, did you know that, say, Greta Gerwig would be Tracy, or was it something that came up later? 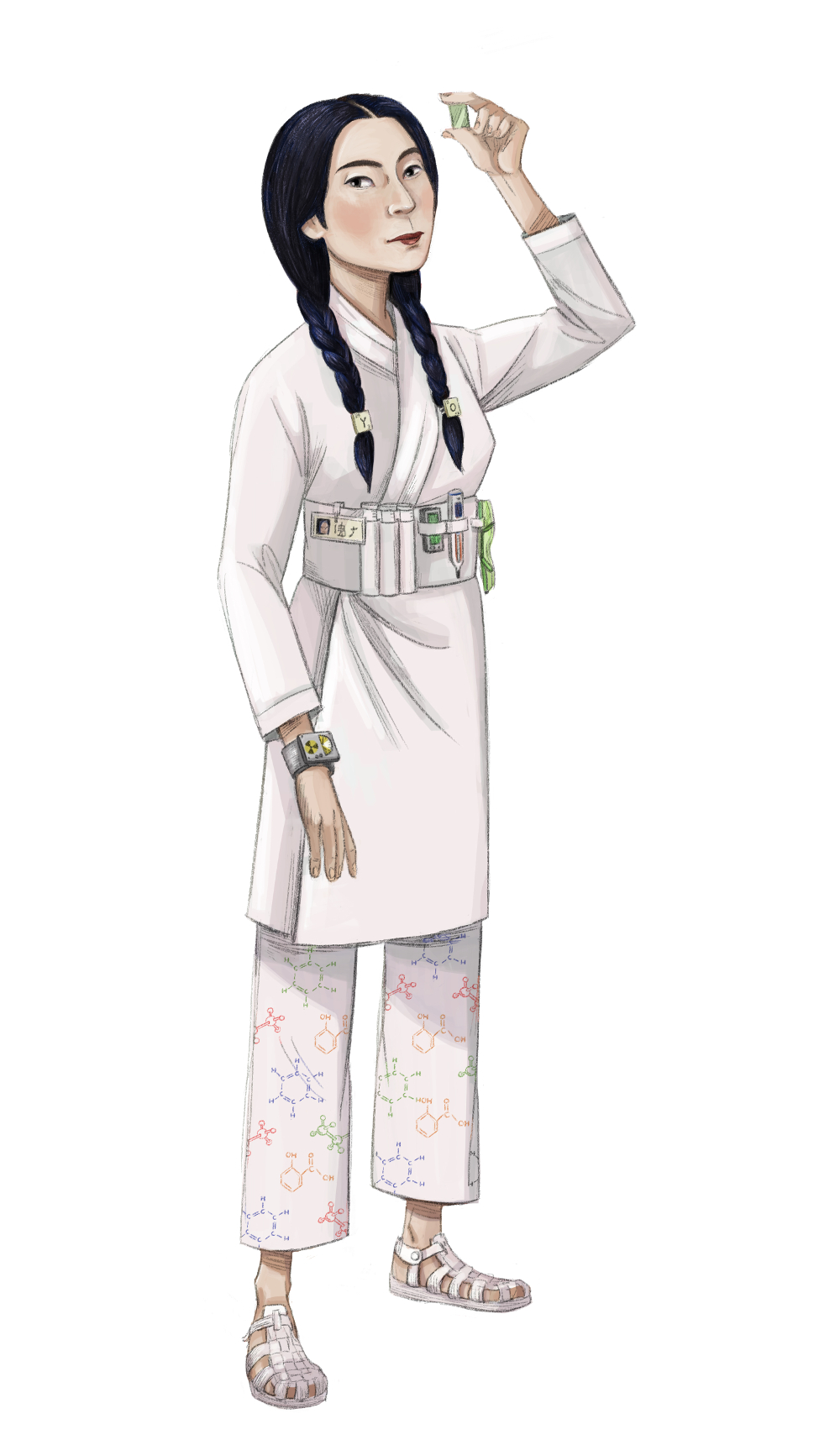 One real-life reference I had was Yoko Ono, but the other characters were not really meant to look like their voice actors. Yoko was one of my favourites – I imagined her as a nerdy scientist, and I drew a little pattern of molecular structures for her pants, like I had seen in my chemistry books.

Was Yoko supposed to be Yoko Ono from the onset?

Actually, the character was originally based on a Japanese actress from the movie Godzilla, and then we introduced a little bit of Yoko Ono and she started to look more like her…

So characters actually evolve and get fine-tuned in the creative process?

Yes, exactly. I also remember Wes was looking for something special for Yoko’s hairstyle, and I was trying everything I could think of: a Nouvelle-Vague, Godard short hairstyle, a retro-wavy cut and in the end, out of nowhere, it was these braids that we liked… Wes is very specific. He knew from the outset what kind of shoes the character should wear! 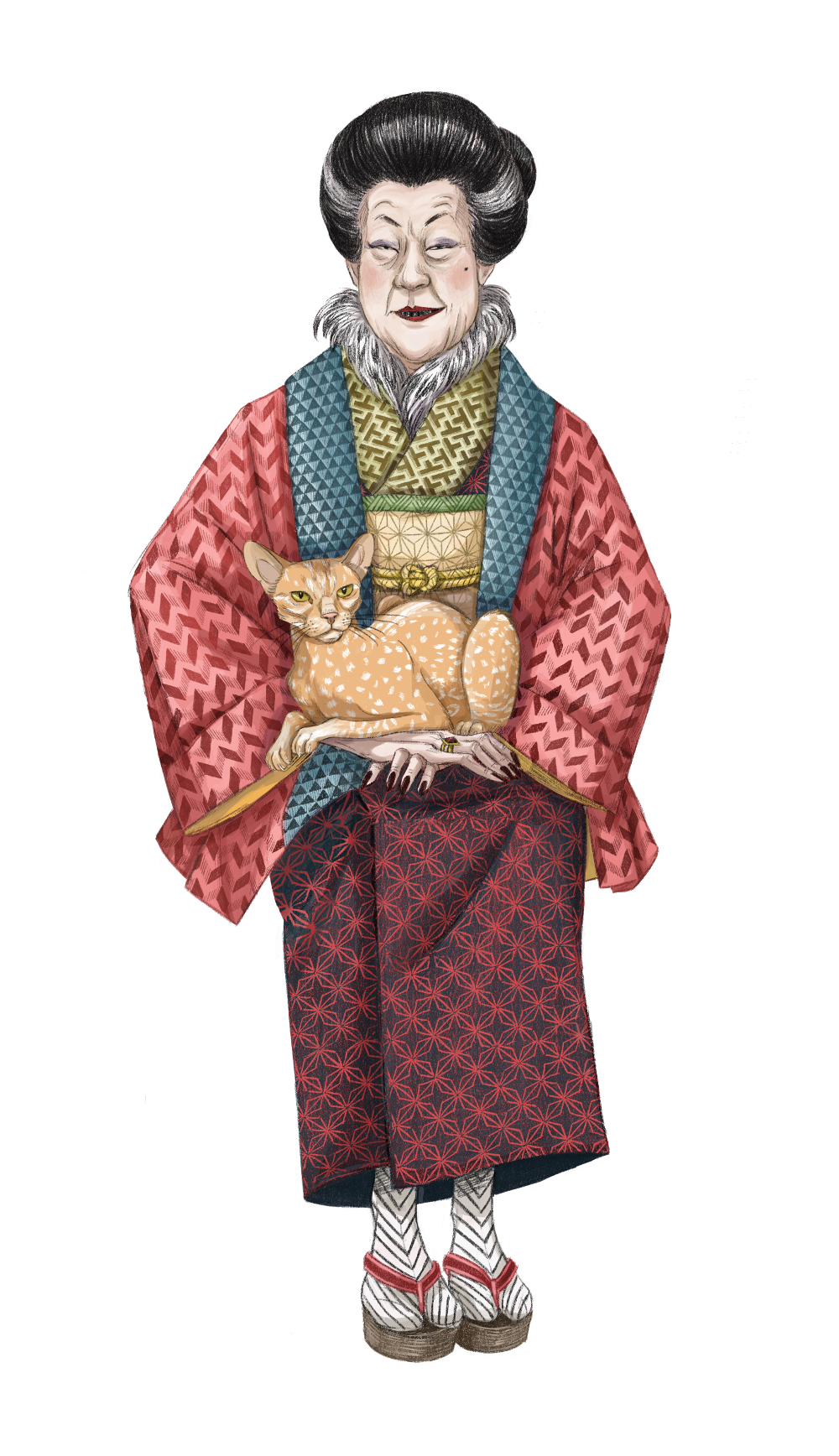 Yes, he often takes time picking accessories for the characters. He also wanted to make sure we got the Japanese details right, and would always ask me for my references. It’s funny, because as a kid I wanted to draw costumes for opera or theater, and a lot of my work for Wes was to design costume details, like the labels they have on their clothes, or their watches and rings… We spent ages, but I actually loved working on the kimono patterns of the geisha!

So Wes Anderson was really involved in your work, but how often would you actually meet?

I was emailing him six times a day during Isle of Dogs, but didn’t meet him until the première! The studios were in London and Wes lived in Paris, so he would communicate with his whole team via email. He’s very involved and will discuss every detail of the design and the animation, but he likes to remain one step removed from the frontline.

How was it to finally meet him after so much remote work together?

It is very overwhelming to see the results of something you’ve worked on for so long, I was all over the place emotionally. So many people all working on the same thing, and you see how it all came together – and Wes is the person behind it all!

You mostly worked for stop motion – from Max & Co to the Anderson films. How does it feel when your 2D drawing comes to life as a puppet?

I love the style of stop motion animation and all the hand-made details and textures. I think my style of illustration lends itself more to stop motion, because I like to be very detailed. Also I think that the people in the stop motion world are the loveliest kind of geeks. They pour so much love into what they do, and it shows.

Do you feel like there was a life before and a life after your Wes Anderson films?

Definitely, people associate me with the project and that helps. It’s funny, as I often get hired to work on commercial jobs that are supposed to look like Mr. Fox or Isle of Dogs, but by the end, they look completely different!

You have so many corporate clients – from Mc- Donald’s and Coca-Cola, to Adidas and Nike, and top chocolate and tech brands… Are you picky?

Yes, now I get to choose my projects, which is great. I try to make decisions based on my ethics, but it also depends on the people I am working with. I do a McDonald’s commercial almost every year now, because I really enjoy working with the director and the animation company, and because it’s for the British Happy Meal – they give out Roald Dahl’s books to children, so I get to draw in the style of Quentin Blake, who is a hero of mine.

Do you have a working ritual? Are there any special surroundings or tools you need besides a computer?

I need a cat! I’m working behind my computer a lot, so it’s great having a cat – a very loud cat – who reminds me that I should also get up and play! I found my cat Cosmo on the street when I moved to Brooklyn. He’s a great inspiration. Two of the projects I’m really looking forward to working on in the future are about cats, so he’ll be my model.

You had a boyfriend in Berlin and used to come here all the time. What made you choose NYC over Berlin?

Yes, I spent some time here and I like the city. I know it like someone who lives and works here, so in that sense I became a bit lazy – I know the Neukölln vegan cafés better than the museums! My boyfriend wanted to move, and I had been in Brussels for a long time… We both wanted to start a new chapter, so Brooklyn was the next step.

What are your favourite places in Berlin?

I really like the Natural History Museum, I want to go back and see that weird collection of preserved specimens in jars, it’s fantastic. I’m also planning to do some boating on the Spree!

Félicie Haymoz was born in 1981 in Fribourg, Switzerland. She studied illustration at the Royal Academy of Arts in Brussels and since 2006 is Wes Anderson’s go-to character designer for his stop motion films. She relocated to Brooklyn four years ago and has since been creating a wide variety of characters for both commercial projects and film.