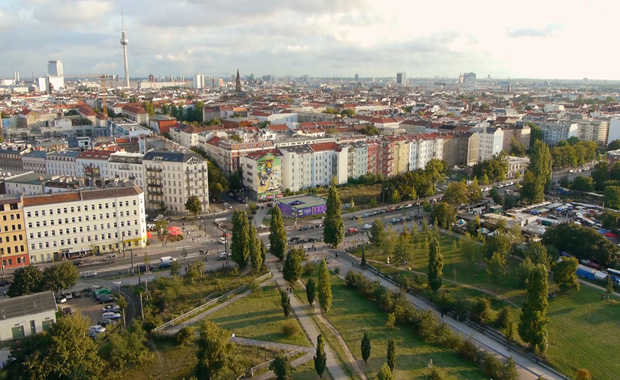 The film will be screened in German OV with English subtitles and open Exberliner’s EXBLICKS monthly film night on Sep 12 at Prenzlauer Berg’s beloved anti-plex, Lichtblick Kino. Karsten, who will be present during EXBLICKS  for a Q&A with the audience (in English), answered our five first questions.

I moved back from Kreuzberg to Prenzlauer Berg, where I had lived years ago, and re-discovered Mauerpark as I was living close by. I brought a new camera with me one day and was trying it out, playing around with it. It felt very comfortable shooting there. Mauerpark is a like a forgotten island in Prenzlauer Berg, because it’s generally so expensive and gentrified, but there’s also this alternative scene.

Who’s your favourite character from the park?

Well, of course I like Frank a lot, who is the guy on the posters. He’s very funny. But generally, I can’t say. There’re so many different sorts of people there that I got to know. Although many of them were extroverts and easy to talk to, I discovered how much more difficult it is for a man to approach someone. When it’s a guy, they’re not interested or girls think it’s some sort of pick up. Girls are generally more open with other girls and then when a girl approaches a guy, they think it’s a pick-up too, but they like it!

Last year’s Hasenheide (directed by Nana AT Rebban) also explores Berlin’s parks. There’s also a movie about Görlitzer Park. Is it an epidemic among filmmakers?

I don’t know, maybe it’s all bullshit, but it could be that as Berlin is changing and becoming more expensive, people go to the parks more because it still holds that freedom that’s becoming harder to find.

The film was shot in the summer of 2009 with the looming threat of gentrification and developments. Has much changed since then?

I’m still in touch with a number of the organisations involved in the film, but I think things have paused a bit because of the upcoming elections. Nothing has changed so much. I think that the current owner will just wait five, maybe 10 years, until no-one cares anymore because the district will have changed so much.

You’ll be opening the Exblicks series.  Why should people bother to come and see your film?

The film already has a kind of nostalgic feel to it. It captures Berlin at a certain moment in time, so that over the years it will be possible to look back at what Berlin was like in 2009, how it was, how it looked, and I think that’s important to show.