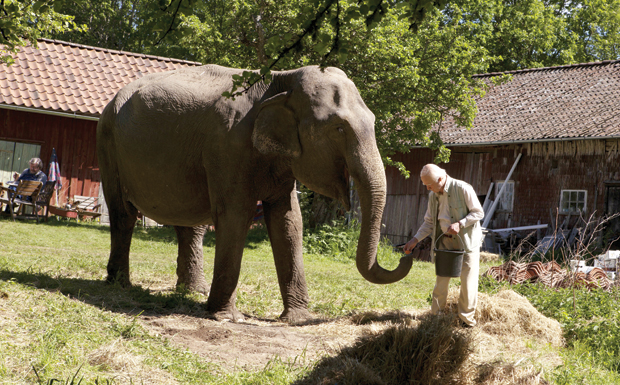 Swedish director/actor/comedian Felix Herngren helms “The Hundred-year-old Man Who Climbed Out of the Window and Disappeared”, opening March 20.

Last year, Herngren took on a daunting first solo project – to transmute the sprawling, century-spanning adventures of Allan Karlsson from six-million-strong bestseller into celluloid. The tale, which made its German premiere in the Special section of this year’s Berlinale follows unlikely globetrotter Karlsson (played by comedian Robert Gustafsson) on an increasingly cracked foray through both rural Sweden and his improbable biography.

You chose to cast and shoot the historical scenes rather than do it Forrest Gump style with documentary footage.

The stories with Stalin and Franco and so on, they don’t exist as footage anywhere. So it’s not easy to make that work. Forrest Gump works really well because they make stories around the footage that existed – here we have a story where no cameramen were around.

And how do you feel about comparisons with Gump in the first place?

I know [author] Jonas Jonasson, when he saw that film, was quite devastated – “Somebody stole my story – I have it at home in the cupboard!” But – I mean, there are some similarities but it’s a totally different story in a way.

And what did he say about your film?

For Sweden, it was a huge budget.

He sent me a text: “I haven’t slept all night, I saw your film yesterday,” and I was like… [horrified gasp]. And then he said, “The first time I saw it, I was in shock, and then I saw it again straight after and thought it was okay, and now I’ve seen it a third time, and I love it.” I understood – I talked to another author about getting books transformed to film, and he said it’s always a big sorrow, even if the film is well-made. Things are thrown away, new things are put in…

Yes, they’ve been calling about a remake and stuff like that. But nothing is ready yet for that. I think they will wait and see if it works in Europe.

You’d get a bigger budget – for example, you could destroy Vladivostok like in the book…

I mean – for Sweden, it was a huge budget. It was €7 million, the biggest ever for a comedy film.

The rest of Europe is very used to getting serious crime stories from Sweden, not comedies.

You must think that Sweden kills everyone in the country. Mass murders everywhere.

Is there anyone left?

A few people, but not so many. It’s kind of ironic, when you talk about Swedish humour, that the biggest mass murderer in Sweden, Tomas Quick, was not a mass murderer, only a mythomaniac, lying to the police. He was convicted of over 30 killings. And last year, we found out that it was just a big fake. He hadn’t killed anyone. So it was a big scandal – the police did a very bad job. And, well, the police in my film are not such competent good guys either.

There are so many other interesting projects from Scandinavia, like Borgen – why is it all seemingly so good these days?

We have a lot of writers… Ingmar Bergman had a very strong personal tone in his films, and was very unique in doing his thing, really. And he was very good with actors – the acting in his films is almost better than the stories. He’s kind of set a benchmark for how good acting can be in our little country, so everybody is striving to be on that level. I think he is part of the success in Sweden, at least.

The Hundred-year-old Man Who Climbed Out of the Window and Disappeared hits Berlin cinemas on March 20. Check our OV search engine for showtimes.