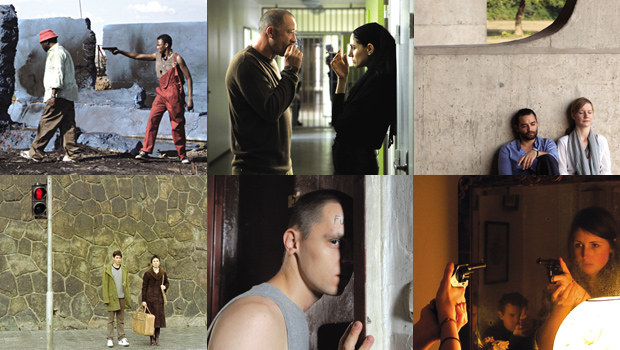 Your first stop for the weird and wonderful, the Berlinale Forum always surprises, challenges, and delights.

Family dramas seem to be particularly strong this year. Vaclav Kadrnka’s Osmdesát dopisů (Eighty Letters) slowly reveals during the course of a day the struggle of a woman trying to emigrate from Czechoslovakia in the late 1980s with her son to join her husband in England; it’s a feature film that attains an almost religious quality as it meditates on a life between two worlds.

Folge mir (Johannes Hammel), by contrast, makes concrete comments on religion. A coming-of-age story of a boy caught between strict religious instruction and a mother teetering at the edge of a psychic breakdown, it’s most interesting for the weird way in which contemporary references invade the historical setting of Basel in the 1970s.

Submarine by Richard Ayoade takes a lighter approach, somewhere between Rushmore and the British comedy series The Inbetweeners, as its teenage protagonist tries to achieve two objectives: to lose his virginity and to save his parents’ failing marriage. It picks up hugely as soon as it focuses on the parents, played by the brilliant Sally Hawkins (Happy-Go-Lucky) and a man who should be more recognized in the art-house world, Australian-born Noah Taylor.

German actress Sandra Hüller lends her wonderfully translucent face to Nanouk Leopold’s feature The Brownian Movement, portraying a women leading a double life in Brussels. It’s a true tour de force by Hüller, whom faithful Berlinale-goers might recognize as Silver Bear-winner in 2006 for her role as the exorcism victim in Hans-Christian Schmid’s Requiem.

Most impressive is the Japanese feature Household X by writer/director Kohki Yoshida. A husband, wife and grown son share a house but have absolutely nothing to say to one another. Whether it’s been a gradual breakdown or a radical tragedy some time in the past that caused this total end of communication, we never find out, and what at first seems experimental and almost scientific is really a very emotional study of despair in which the characters never stop being real. The way Yoshida manages to keep up a slowly rising tension is truly amazing.

Want more? EXBERLINER features eight of the best directors as part of our “Spotlight on Forum” series