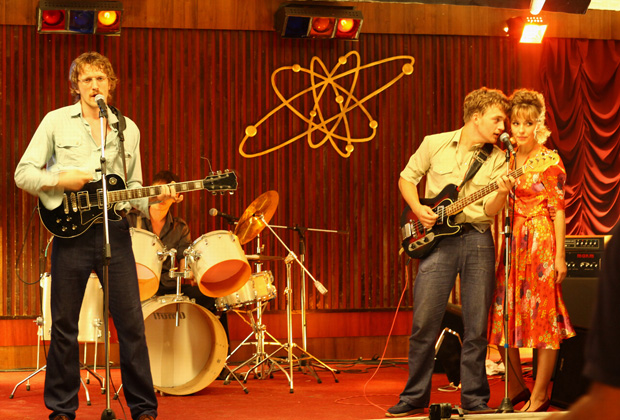 Russian producer Alexander Rodnyansky is no stranger to prestige and recognition, perhaps in part due to the somber and thought provoking nature of his films. They have been Oscar nominated and received a European Film Award and he is co-founder and chairman of the German-Russian Academy and a member of the European Film Academy, so it’s safe to say he knows his stuff.

This year’s Berlinale hosts the Rodnyansky-produced/Aleksandr Mindadze-directed (see our video interview) Innocent Saturday, a film about a group of friends and band mates trying to escape after the Chernobyl disaster. We posed four quick questions Rodnyansky to illuminate us about the film.

You were born in Kiev, so the topic of Chernobyl is surely personal for you. The desire to make a movie about nuclear catastrophe is absolutely understandable. But is it strange that one Russian at last year’s Berlinale, How I Ended This Summer by Alexei Popogrebsky, and two films at this year’s Berlinale, Target by Alexander Zeldovich and Innocent Saturday by Alexander Mindadze, concern the issue of radiation?

Nuclear energy – the Chernobyl accident, brain irradiation or cemeteries of nuclear waste – reflects the current state of affairs. This is the story of global industrial civilization vs. a little man. This is a Russian story about a life where small things, small pesonal accidents are often more important than the conscious decisions and intentions.

We, Russians or Germans or others, live in close proximity to the danger in a timeless sense of catastrophe. The story is very relevant today, we are living in a state of permanent crisis: natural, technological and economic. But we, the Russian, and German people, continue to live, to enjoy, the human [experience].

The reactor in the film looks very realistic. How you able to create this effect?

The film was shot in a small Ukrainian city – Energodar. The burning reactor was modeled in Germany, by computer, of course. It took a long time to recreate a realistic picture. But I think we succeeded. We had an amazing operator working with us – Oleg Mutu. He also shot The Death of Mr. Lazarescu and 4 Months, 3 Weeks and 2 Days.

Can you tell us a bit more about the Ukraine?

In Ukraine there are eight reactors completely identical to Chernobyl. And the Chernobyl reactor was actually quite new and absolutely safe – built in 1975, the chance of catastrophe was less than 0.0000001 percent.

Got any new projects going on?

Well, the main project is Andrei Zvyagintsev’s Helena. Next year we will submit it to Festival de Cannes, I hope. And the blockbuster Stalingrad by Fyodor Bondarchuk, also.The film is about the Battle of Stalingrad – it will be impressive.