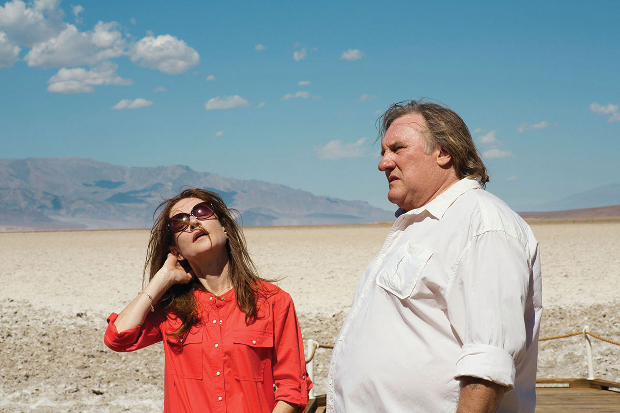 As it’s becoming a great new winter tradition, we welcome the 15th edition of the French Film Week and its latest crop of arthouse and mainstream hits from across the Rhine. The seven-day fest opens with Valley of Love (photo), which stars Gérard Depardieu and Isabelle Huppert as estranged spouses reunited at the request of their deceased son. The plot is thin, cryptic and evidently an excuse: it’s actually director Guillaume Nicloux, already at grips with celebrities and their self-mythologisation in The Kidnapping of Michel Houellebecq, who’s reuniting the two French stars, 35 years after Pialat’s Loulou. Is this premise enough to sustain a feature film? Well, the sheer presence of these two titans is enough to fill the screen! Another legend, Nouvelle Vague writer and director Philippe Garrel, returns with L’ombre des femmes, an exquisitely crafted feminist drama that deals with love, art and the self-absorption of the male ego as only a Garrel film can. Also as French as it gets, Maïwen’s Mon roi, with powerhouse duo Vincent Cassel and Cannes Best Actress winner Emmanuelle Bercot, surfs the emotional wave of relationship drama at turbo-speed. Expect more ‘breath’ than depth! Meanwhile, the Turkey-set girlhood drama Mustang, about five sisters growing up in a climate of female oppression, doesn’t speak français, but carries a vivid spirit of protest and an intoxicating dose of European flair thanks to its French-Turkish maker Deniz Gamze Ergüven. The historic epic Francofonia is acted in a mixture of languages and very much the brainchild of Russian master Aleksandr Sokurov. Set in Nazi-occupied France, with its focus trained on the Louvre, the film examines the intricacies of cultural preservation during a time of emergency. Encyclopaedically rich and formally convention-breaking, it’s a challenging, exhilarating blend of cinema and academia. Finally, with the gunshots from November’s Black Friday still ringing in our ears, the documentary Je suis Charlie takes us back to the January before, when, in a similarly shocking burst of violence, the staff of satire magazine Charlie Hebdo were killed in their Paris office. While it might not be a particularly refined piece of work, the film reveals in candid interview footage with cartoonists like Cabu and Charb not just a passion, but an artist’s sense of mission in the name of freedom. And nothing says France more loudly than that. For the complete programme, see www.franzoesische-filmwoche.de. French Film Week | various venues, Dec 9-15