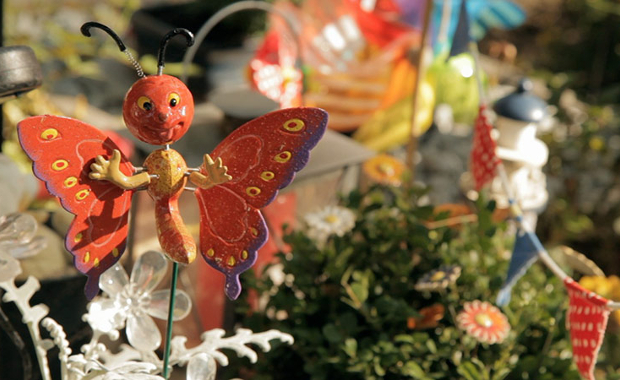 Join us at EXBlicks for Stéphane Riethauser and Pasquale Plastino’s enchanted documentary Garden of Stars on Monday, May 29, 8:30pm at Lichtblick Kino.

Fairytales are filled with life and death, but in some cases, places of death are full of fairytales – like the Alter St.-Matthäus-Kirchhof in Schöneberg. Best known as the final resting place of the Brothers Grimm, the leafy cemetery is also home to the graves of innumerable gay men and a “Garten der Sternenkinder” for stillborn babies. Riethauser and Plastino’s documentary Garden of Stars explores this unique Berlin microcosm through the eyes of Ichgola Androgyn, aka Bernd Boßmann, flambouyant drag queen and owner of the cemetery’s Café Finovo. We spoke to co-director Stéphane Riethauser prior to Monday’s screening.

How did the idea for this documentary come about?

My co-director Pascuale lives on the street above the cemetery. From his balcony, you can see the Grimm Brothers’ grave. He told me he was sure that there’s a story to tell about about this place, because he had heard of this former drag queen/cabaret artist who is running a cafe within the cemetery. So we went for a look and met that wonderful person. And he opened the doors to his magic garden. And there were indeed many, many stories there. And that’s how it started.

That former drag queen/cabaret artist you’re talking about is Bernd Boßmann. Was he immediately open to the idea?

Immediately. He’s an actor, he’s very well connected to the city. This cafe that he opened has almost become like a social center for the neighbourhood. A lot of people come here just to have drinks, not only people with dead relatives. It’s really like a neighbourhood place, a magnet for different people from all classes, younger people, older people, with Bernd as their spiritual leader.

How is he doing this?

He is trying to rejuvenate the culture of the funeral. That it’s not only for the big religions, but that you can have a non-religious approach to it. And he works as a undertaker for these babies, or he offers counselling or just communication, as he says. When somebody’s grieving, you don’t always need therapy. You just need human communication, and he offers that. He’s a very open guy and anybody can walk up to him.

What is the connection between gay men and stillborn children?

I would say: death! The connection is that death makes us all equal. And that’s a line from a fairytale. Bernd says it in the film as well. It’s that all these differences, money, class, race, sexual orientation, whatever you can think of, these differences disappear the day we die. And then we can all be buried in the same garden. And that’s kind of his philosophy that he’s trying to apply to life as well.

Do people respond well to a film about a graveyard?

People often have prejudices. We’ve been told as we were shooting the film: “What? You’re shooting a film at a cemetery? How gloomy, how terrible!” But every time we’ve screened it, people loved it! People said, “Oh, we had prejudices about cemeteries, but actually it’s a place full of life.” It broke the taboo of death, which in Western, especially Christian societies is very present still. This is a very joyful, playful, non-judgemental approach to death. And the film is mixed up with the fairytales of the Grimm Brothers.

Do you still hang around the cemetary?

Yes, absolutely! The other day I had a drink with a friend there. And I go vist Bernd regularly. You know, people take their girlfriends or boyfriends or whatever on dates there. They take a walk. It’s a really beautiful place there with beautiful trees, and people often forget that becase they are afraid, like oh my god, dead people are under there. But you know, death is under there, but life is everywhere, too.