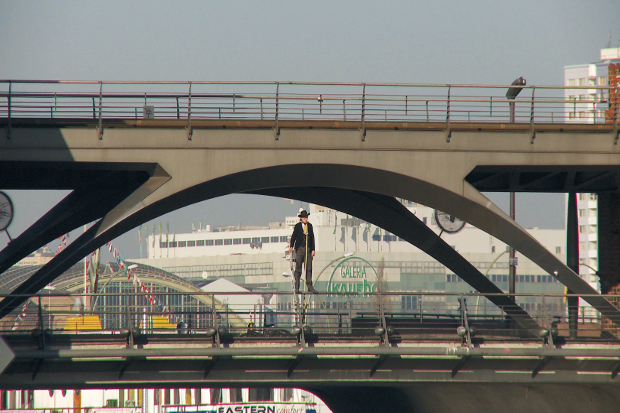 Real cowboys obviously don’t ride horses – Timo Jacobs’ version drives BMXs around the back streets of Berlin, dodges traffic and carries his friends in bottle crates hitched onto the back.

Well that’s what our cowboy does at this month’s EXBlicks. Director Timo Jacobs’ Klappe Cowboy! follows the misfortunes of Cowboy (played by Jacobs), a young, neurotic film buff, who attempts to finally make his big blockbuster whilst battling with his rowdy posse and his love for artist Yps Van Tule, and set to the backdrop of some much missed summer time in Berlin. Jacobs is unable to attend the screening, so we spoke to him here.

In cooperation with realeyz.tv, EXBlicks will be screening Klappe Cowboy! with English subs, followed by a Q&A with two cowboy stars and the film editor on Monday, March 18 at 8pm at Lichtblick-Kino.

Why did you make a film about someone making a film?

It’s kind of autobiographical; it’s just what I wanted to do at that point. I don’t like ‘realistic’ films that much because you see that everywhere, so I wanted to make something more fantastic, which is the way I see things. Everything came together and it has a mix of every kind of genre in it.

He doesn’t own a horse or a gun (we assume); he only wears a cowboy hat. So why call your main character Cowboy?

Because he’s like a real cowboy! He’s pretty determined and he goes for it. He’s so straight forward which is similar to one of those cowboys in the old Westerns. Plus I thought it’s so fucking pretentious to call someone Cowboy. It’s just so stupid that I had to do it. Cowboy does everything in a charming way though – he’s a charming cowboy. I used to work with a guy who’d always call me “cowboy”. He’d say, “Hey cowboy, can you do this?!” I guess I also took inspiration from him.

That’s in my nature! I try to make things easy so I’m always searching for the easiest way to express things. Cowboy’s a straight forward guy and he has to find the easiest way to articulate things and that sometimes comes across as an insult. The humour in the film is really influenced by my life.

Did you have a big budget to make Klappe Cowboy!?

No, which is a shame. I wish I could have paid people more. But that’s the way it goes. It’s difficult when you don’t have a big PR agency at your back. We had no funding and so I made the film totally independent. We’re still doing international film festivals. I wasn’t trying to make it a big blockbuster though. You have to make the most out of the what you have, I didn’t have a lot of money when I was making Klappe Cowboy!

Most locations in the film are pretty recognisable to Berliners. Berlin almost feels like an extra character.

Cowboy needs attention because people don’t give him respect for his work. He can’t live with it. He’d rather kill himself than be a nobody. It’s like what Cowboy says, “I’d rather be a short somebody instead of being nobody for the rest of my life.” People try too hard and that’s Cowboy’s problem too. If you try too hard things won’t work out, so just go with the flow. Cowboy is just over the top and he shows everyone how you really should not do it!

He has his own politics and his own idea of life and really follows it. No one could tell him anything different. That’s what I like about him. He’s swimming against the tide.

Have you any advice for the cowboy filmmakers of Berlin?

Yes, don’t just keep talking about filmmaking, do it. The more you talk about a project the more it dies. If you speak about it more than five times, that’s it dead! And you should choose the road with the most difficulties and if you have to decide which way to go, just go.