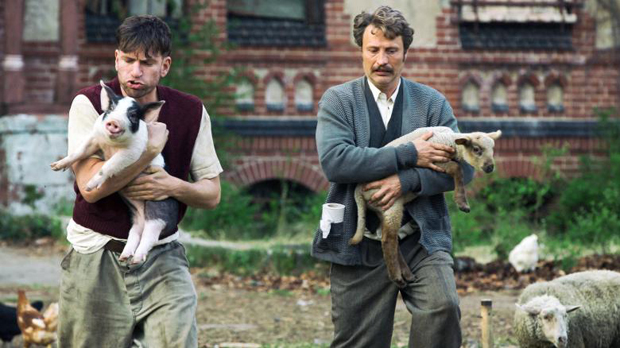 Fans heartbroken by the cancellation of Hannibal will get a chance to see everybody’s favourite Dane Mads Mikkelsen on the big screen again in Anders Thomas Jensen’s Men & Chicken.

In the disturbing black comedy, Mikkelsen plays an unassuming character who, together with his brother, embarks on a journey to find their biological father on a remote island, only to discover more than a few skeletons in the closet.

Considering you’ve worked with writer/director Anders Thomas Jensen many times in the past, was it a big relief when he called you and said “Let’s do it again”?

It’s not because of the other things we’d done, but it was a big relief that he finally pulled himself together and wrote a crazy and beautiful script again, set in this magical universe of his. Of course I was hoping it would happen sooner, but better late than never.

What was your reaction when he pitched this story about brotherhood and bestiality to you?

Well, he didn’t pitch it like that. I know whatever he wants to do is always, at least to me, beautiful… poetic even. And that it’s probably going to be about God, Satan, life and death – the meaning of life in general. He does realise that it can come across as very pretentious when you make films like that, which is why he wraps it all in this crazy universe, so he can get away with telling this beautiful story. But whatever craziness there is, I know that there’s a very poetic core to it.

For a movie with such a strong element of slapstick, it’s actually pretty dramatic.

It’s extremely dramatic, but it’s not dogma-style, kitchen-sink realism kind of dramatic. Many big dramas today can be so pretentious, where the actors deliver long monologues about life and death. When Jensen wants to tell these important stories, he prefers to wrap them up in crazy packaging, so we can get away with it. I think that’s become his trademark. I mean you can see some Coen brothers in there, some David Lynch, but he’s very much himself. It’s a very unique style.

For a movie with such a dark subject matter, it’s surprisingly funny as well.

Humour helps you digest things. But it’s important to note that we tried not to make this film funny funny, we tried to take it all very seriously. It takes a lot more skill to be sad in this film than in say, The Hunt (2012). It’s the same emotion but in this case, you’re supposed to be sad about some cookie that’s fallen to the floor, instead of this big child molestation drama. We try to make that emotion just as real, and for that reason it becomes totally absurd. The truth is: children do that, people who are lying do that. Emotionally, they go all in. So by trying to achieve something honest, it becomes very funny, because it’s just so ridiculous to watch.

How did you approach something like this as an actor?

I’d be lying if I said I didn’t know a lot of it was going to be funny. But we also knew that the more seriously we took it, the funnier it’d be. As a result we threw away quite a few punch lines. Even though he [Jensen] comes up with fantastic punch lines, we still do without many of them because the characters would otherwise become too aware of being funny. If these characters talk like they do in France or on How I Met Your Mother, it would take us out of their universe.

How did you perfect your comedic timing?

Timing is very tricky. You can practice it – I think many great comedians do that. I don’t consider myself a comedian, let alone a great one. For me it comes down to the honesty again. The more truthful you are to the character, the more you behave as one. And when you feel you’re on a roll, the timing becomes perfect. But when you think about the timing and consciously try to make everything you do funny, then it won’t work. You have to be a little impulsive, which I think applies to comedy, drama and everything in between.

You went from playing Dr. Hannibal Lecter, an icon of sophistication, to playing Elias, a rather simple-minded guy in this movie. Which role posed the greater challenge?

With this kind of film it’s a challenge to the actors obviously. Jensen and I have dabbled in similar territory before, and really hit it off first with Flickering Lights (2000), then with The Green Butchers (2003). Through the creation of radical, annoyingly idiosyncratic characters we did something that’s theater-like and seldom done on film. It’s tricky to perform in this particular type of film, to make your characters believable, because the audience is so used to seeing films done in a certain way, dictated by the rules of established genres. So I would say this role is the bigger challenge, even though there are or course other challenges involved in acting in a foreign language, speaking Italian, Japanese or doing whatever I have to do on that fucking show [laughter].

What is your character Elias about? Did you see him as a fairy tale character?

He’s very real to me. He reminds me a lot of Jensen’s children. He has the most fantastic kids, but you could probably also say they are the kids from hell. Individually they’re super charming, I love them all. But together they’re a fucking nightmare. They fight non-stop, antagonise one another by any means necessary, show no emotional stability whatsoever. Watching them is like watching a movie.

So I very much based this character on reality, I approached him like a child who has not gotten enough attention in his life – with good reasons – because he’s so annoying, nobody likes him. The only thing he wants, which he never says out loud, is for his older brother to like him, and it never happened. So I see it as a really sad story about a man who’s not being loved, although he is not necessarily aware of that.

Are humans allowed to play God?

It’s an interesting question. We just talked about Hannibal, who plays God all the time. I think it’s a moral discussion. We do play God every day. Two men can have kids today, based on their own DNA. We save people from cancer, save whole continents from starvation and we wage wars against each other, which is also a godly act. So we’ve actually been playing God all our lives. But it’s tricky, especially when it comes to genetics. We can do so much good for humanity and the planet with the help of genetics but the opposite can also happen, as with every other major scientific discovery. So it’s really a matter of how we use it.

You shot many scenes in the abandoned Beelitz-Heilstätten complex in Brandenburg. There are a lot of spooky tales about this place. Did you catch any of that atmosphere?

I heard the stories. I wish I were one of those people who see and sense ghosts, but I don’t. You can definitely feel the atmosphere though. When you look at the old houses, some in immaculate condition, some with trees growing through their roofs, there’s just a decadence to the whole place, as there is to Berlin. It’s beautiful to see there’s everything in that area: some things falling apart and some still standing.

What’s the biggest difference you’ve noticed, having worked in so many different cultures and environments?

The biggest shock or difference I’ve experienced happened when I was working in India on a Danish film. The value of life, the way you view your fellow humans, the way they treat each other was all very different. Also, working there with some people who were living in extreme poverty and then going back to a four- or five-star hotel was absurd for all of us. That was definitely a clash of cultures.

Do you still enjoy going back to Denmark to film?

Of course. This is my language, these are my stories. There will always be something familiar for me to go back to. I could say the same thing about Toronto now I guess, where I’ve lived for three years. I’m pretty good at changing my homebase.