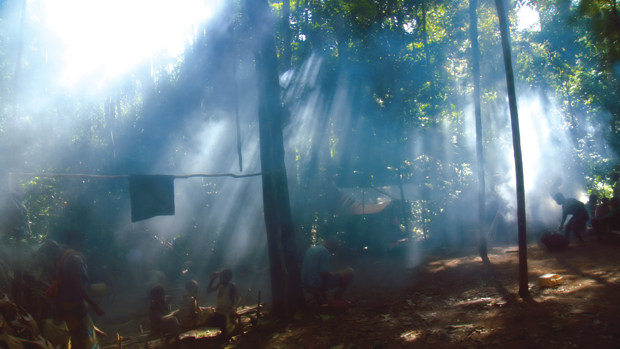 A song on the radio led American Louis Sarno to the Central African rainforest. Twenty-five years later, Michael Obert found him there.

In his debut documentary Song from the Forest, Obert, a Berlin-based journalist turned filmmaker, follows Sarno and his son Samedi as they journey from their home among the Bayaka tribe to the US.

Adventurer, journalist, writer, filmmaker – how would you describe yourself?

Storyteller. Or traveller and storyteller maybe. I think travelling brought me to writing, and writing brought me to filmmaking basically. But it’s mainly my interest in stories of human beings. I like these stories that ask existential questions basically, and that make me think about my own life, my own path, my own story, my own decisions. And that’s the way I write my stories.

Song from the Forest is your first film. You must have faced a lot of challenges…

No electricity, obviously. No running water. Dense vegetation. It’s always dark, incredibly humid. But the biggest challenge was shooting in the US, because of Louis’ deep culture shock. Very often I had to leave the camera and just turn from filmmaker to human being, to friend. To support him. I think that was a lot harder than anything we experienced in the jungle.

How does that work? How do you know when to put the camera down?

I don’t really consciously reflect on this. If I feel if this is a moment to help and act in a human way, then I just act. I think my filmmaking and my journalistic work is always happening on a very human level. At eye-level. So the people I’m dealing with, they usually trust me. I don’t want to disappoint them when they need my help.

It’s a nostalgic film about lost people – both Louis Sarno and the Bayaka. Do you think a documentary film can do more than just document?

Personally, I don’t care about genre definitions. I like to treat the subject almost as if it was a feature film. I hate talking head films. I hate the whole biopic thing as well. For information, you can just go online. It’s definitely not a film about answers. I hate answers in movies. It’s a poetic work, and poetry is all about space I think. So the movie opens spaces and you can wander around the spaces as an audience, and then you come out with your questions. That’s the type of storytelling I’m interested in.

It’s very observational and spontaneous – do you have a favourite moment?

What really touches me still is whenever the 16th-century music comes up. The whole idea to use William Byrd’s Mass for Four Voices as the backbone of the whole movie, it’s an experiment, but I think it worked out really well.

What’s the story behind that music?

That first night after our encounter, he took me to his hut and we were talking randomly for hours. At one point, I was so exhausted I just lay down on the earth floor, and maybe a couple of hours later I woke up and I heard this music, the first piece that we use to open the movie – the Kyrie of the Mass, sung by the Oxford Camerata. I had the feeling I was between a dream and reality. And then I opened my eyes and saw Louis at his worm-eaten table in the Rembrandt light of his lantern listening to this music, and I got goosebumps. I think the music Louis had heard on the radio lured him into the rainforest, but this music lured me into his life. It will be five years ago this autumn, and I’m still there. He’s a major part of my life, I’m a major part of his life. He’s my rainforest, basically.

Song From the Forest opens in Berlin cinemas on September 11. Check our OV search engine for showtimes.