With current lockdown restrictions bringing virtually everything to a screeching halt and leaving many coming up with cabin fever-skirting tactics in order to avoid bits of their brains falling away like a wet cake, it’s no wonder that streaming numbers have soared. It’s an effective but ultimately flimsy gauze to keep the cinemagoing withdrawal symptoms at bay, and it’s worth keeping in mind that other forms of entertainment are available for card-carrying cinema lovers during these times of social distancing.

So, if you’re sick of screens this Easter weekend and aren’t brave enough to watch one of the 700 films that remain banned from public screenings in Germany during the Christian holiday (specifically Good Friday), or you simply don’t have the emotional wherewithal for another Netflix binge after the morally-ambiguous celebration of abusive ego-goblins who don’t deserve to become folk heroes that is Tiger King, we’ve got you covered. This week, instead of a fresh set of streaming tips, we’re treating you to our favourite film-related podcasts, the ones no self-respecting film buff should be without.

Considering the embarrassment of riches out there, we’ll limit our picks to podcasts that aren’t weekly round-ups focused on reviewing recent releases, but rather a mix of established, new-ish and criminally under-downloaded shows that approach film from fresh and compelling angles. So sadly, brilliant podcasts like Kermode & Mayo’s Film Review and Little White Lies’ Truth & Movies will not feature in this list.

Without further ado, cinephiles, take note – whether it’s looking back to Hollywood’s troubled past, deconstructing genres, or just giving some terrible movies another gander, these podcasts will ensure your quarantine days will be over before you know it. 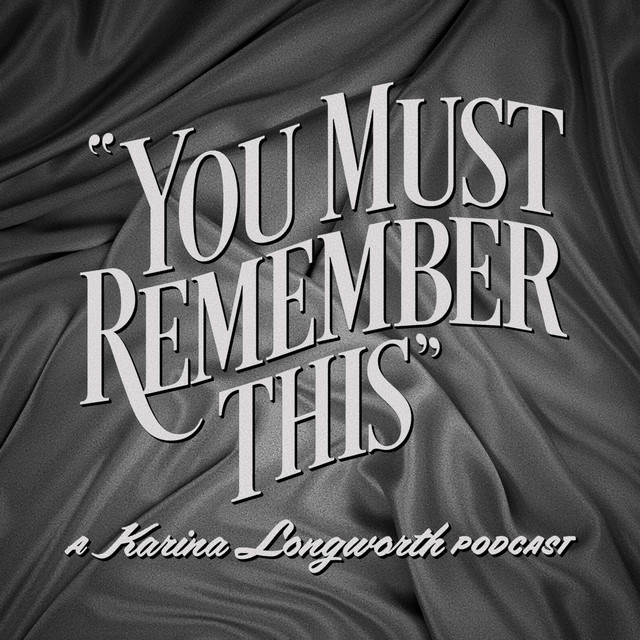 YOU MUST REMEMBER THIS

Launched in 2014, Karina Longworth’s utterly captivating and insightful passion project You Must Remember This is a must-hear. Created, written, produced and narrated by Longworth, this meticulously researched work of creative nonfiction plays out like an investigative deep dive into classic American films and Tinseltown’s forgotten stories. It cuts to the heart of old intrigues, urban legends and scandals that Hollywood would rather see disregarded in favour of generally accepted mythologies.

From the creation of the Hays Code (and who decided what was and wasn’t allowed on screen for decades to come), the 1946 cartoon Disney wants you to forget about (and, true enough, it doesn’t feature on Disney+’s streaming catalogue), to Marlon Brando’s destructive behaviour, the fastidious research that goes into every episode is off the charts. Each one feels self-contained – even if they belong to a wider thematic series – and Longworth treats the listener to a richly detailed and slickly produced picture of the developing decades, as well as to her thorough understanding of an industry that has seen its fair share of highs and tragic lows.

As a piece of in-depth film journalism, we recommend the series on Hollywood’s “Dead Blondes” and the role of actresses within the film industry, as well as the terrific 12-part series “Charles Manson’s Hollywood”, which focuses on how Charlie Manson’s infamous crimes became inseparable from show business and the Hollywood studio system.

If you’re not familiar with this podcast, get downloading now. You won’t regret it. 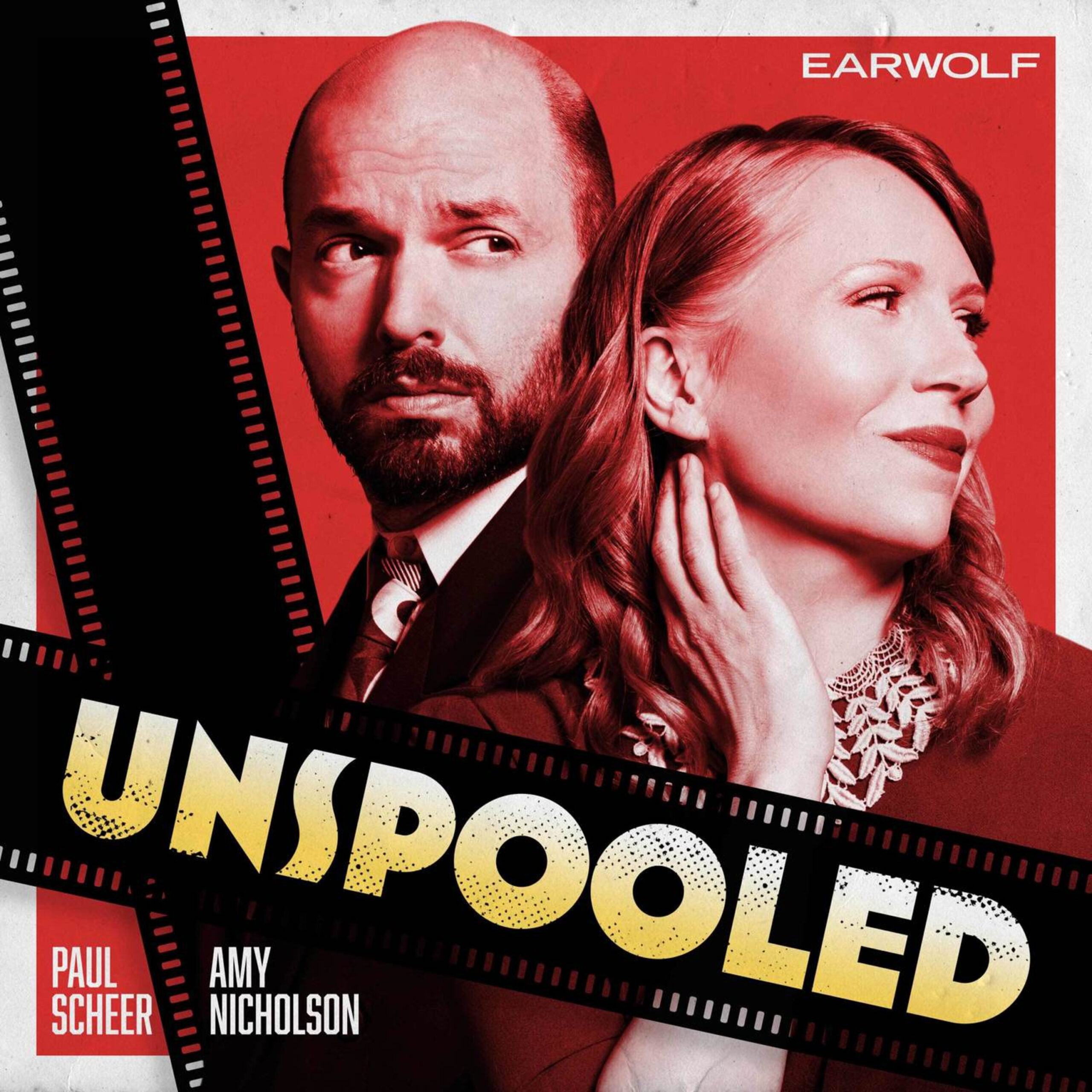 The premise of Earwolf’s podcast Unspooled is brilliantly simple: despite his movie buff status, Paul Scheer hasn’t seen many of the all-time classics. He teams up with film critic Amy Nicholson and both of them take on the mammoth task of watching every single title in the American Film Institute’s Top 100 movies of all time. Together, they wittily assess the films’ merits, dissect iconic scenes and interview key players to better understand the lasting appeal of certain movies.

From 12 Angry Men to Pulp Fiction via Psycho (with extra Best Of The Decade discussions and dives into more recent classics-in-the-making, like this year’s Oscar-storming Parasite), both Scheer and Nicholson share a deep appreciation for the historical significance and influence of the films they talk about. They also have an appreciable critical stance with regards to the reverence bestowed upon certain titles. Put simply, they don’t waste their time – or yours – by obnoxiously telling you what’s worth venerating, and don’t wax lyrical about how Citizen Kane is an absolute masterpiece, you filthy heathens, blah blah blah. Instead, they contextualize and discuss the ‘why’ behind the Top 100-anointments, sometimes through Nicholson’s surprisingly accurate The Simpsons theory.

Get listening to find out more, and keep an ear out for Earwolf’s other show, How Did This Get Made? (also hosted by Paul Scheer), which celebrates the best of bad cinema.

THE FACULTY OF HORROR

Horror hounds rejoice! The Faculty Of Horror is the podcast for you.

Executive editor of horror magazine Rue Morgue Andrea Subissati and Alexandra West, the author of the excellent ‘Quelle Horreur: The Films Of New French Extremity’ and ‘The 1990s Teen Horror Cycle: Final Girls And New Hollywood Formula’, host this compulsively listenable, independently produced podcast from Toronto. Once a month, they broadcast from the “horrored halls of academia”, selecting a topic and exploring it through the prism of classic and contemporary horror films. Their analysis (as well as their relaxed chemistry) is both insightful and thoroughly entertaining, and never limits itself to the films: they apply film theory to better dive into the issues that populate the specific movie, the collective genre, as well as what these elements say about evolving societal mores.

The podcast has been going since December 2012, so you can scan through their extensive back catalogue and devour the films and topics which most appeal to you. Recent highlights include the Anne Rice episode, in which Subissati and West dig their teeth into cinematic vampires with Interview With The Vampire and Queen Of The Damned, a fascinating delve into moral codes and the dangers of God-complexes through David Fincher’s Se7en, and the most recent March 2020 episode, a tour of interwar Germany via two celebrated classics: The Cabinet Of Dr. Caligari and Nosferatu.

Don’t miss out. It’s not only one of the smartest and most engaging film podcasts out there, but also one of the best podcasts, period. 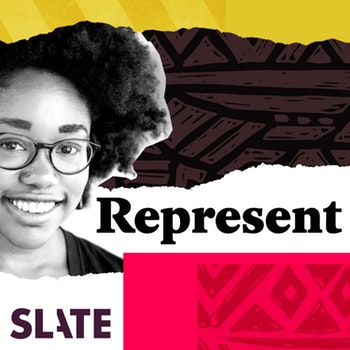 Writer at The New York Times and former culture writer for Slate, Aisha Harris aims to “shine light on the overshadowed” with her interview show by engaging with industry figures who are actively working to improve the representation of marginalised groups in film entertainment. These groups include women, people of colour, the LGBTQ+ community and people with disabilities.

Over the course of its two years (2016 -2018), Represent was a space for discussion, and the conversations Harris had with directors, writers, performers and activists continue to serve as thoughtful profiles of those trying to shape the industry for the better, often with the odds heavily stacked against them.

From chatting about the politics of Wakanda vs. black America alongside former Slate chief political correspondent Jamelle Bouie in the ‘Wakanda Forever’ episode to discussing “shameful representations” in film and TV with British writer Bim Adewunmi and Latino USA’s Antonia Cereijido in the A Wrinkle In Time episode, each instalment provides a fascinating insight into an industry that still has a long way to go. 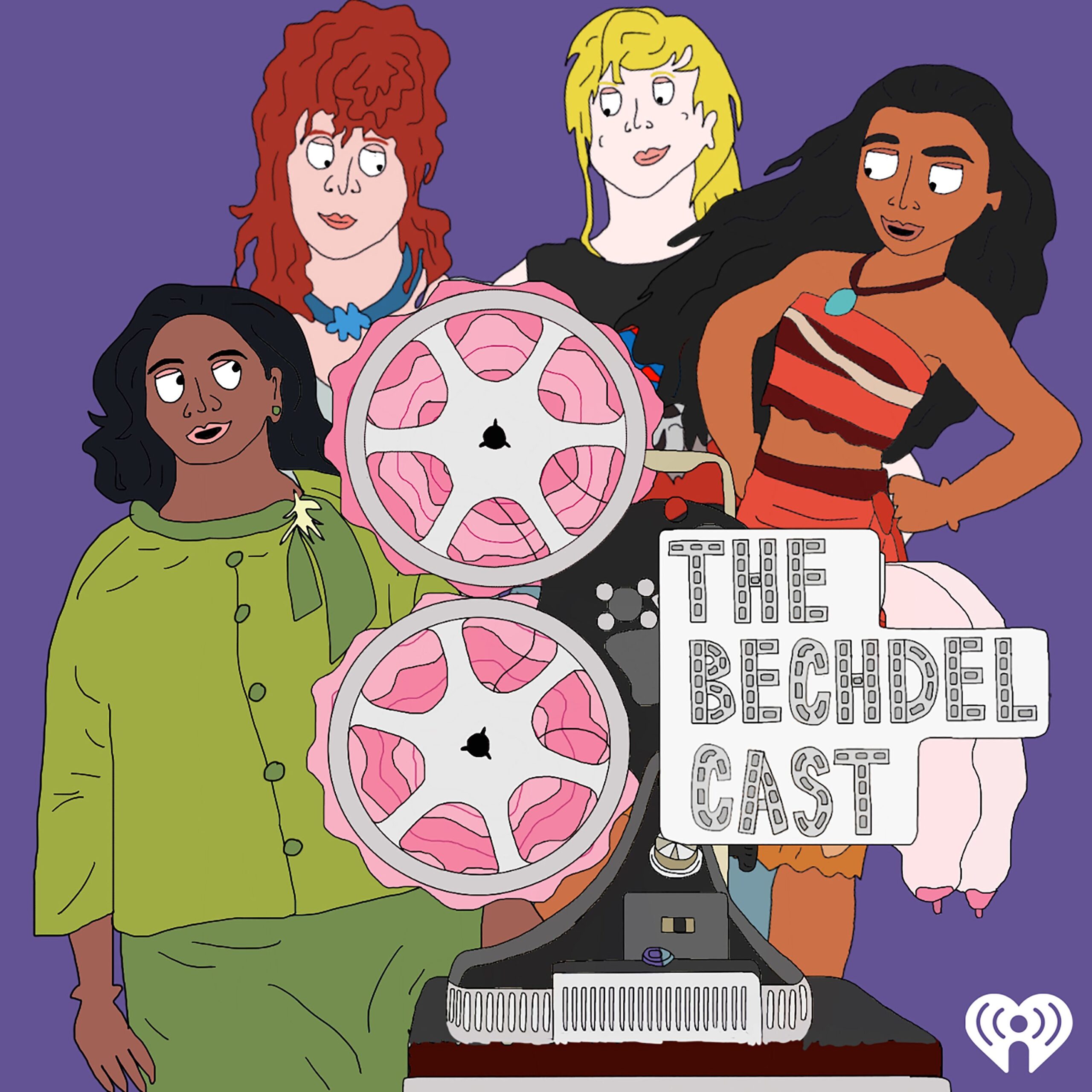 Much like the Faculty Of Horror frequently views films through a feminist viewpoint to further unpack the historical, societal and psychological aspects of movies and film culture, The Bechdel Cast looks at a different movie each week and examines the way women are portrayed.

Started in 2016 and hosted by LA-based comedians Caitlin Durante and Jamie Loftus, The Bechdel Cast is far from the finger-waving exercise many will stupidly dismiss it as. It’s based on sincere criticism and while it may not be for you if you’re not prepared to reassess your favourite films and their likely lack (or damaging brand) of female representation, rewards await those who listen. Indeed, the curious will be rewarded with engaging, thought-provoking and frequently laugh-out-loud funny discussions that crucially never fall into hectoring or reductive crusading. It’s not about dismissing the films outright but holding them up to some much-needed and compelling scrutiny: the range and limitations of the Bechdel Test are discussed, other representation assessments are brought into the fold (including the DuVernay and the Mako Mori tests), and Durante and Loftus never limit themselves to easy cinematic targets. Classics (Labyrinth, Manhattan) and newbies (Carol, Booksmart) and everything in between (Mulan, Love, Actually, The Matrix) go under the microscope and are appraised on whether they pass Alison Bechdel’s famous test. They’re also rated on the “nipple scale” from 0 to 5 nipples, based on how female characters are portrayed.

Get listening, and if you like this one, we also nudge you towards Gavia Baker-Whitelaw and Morgan Leigh Davies’ Overinvested, as well as the fortnightly Bad Feminist Film Club podcast, which are just as brilliant. 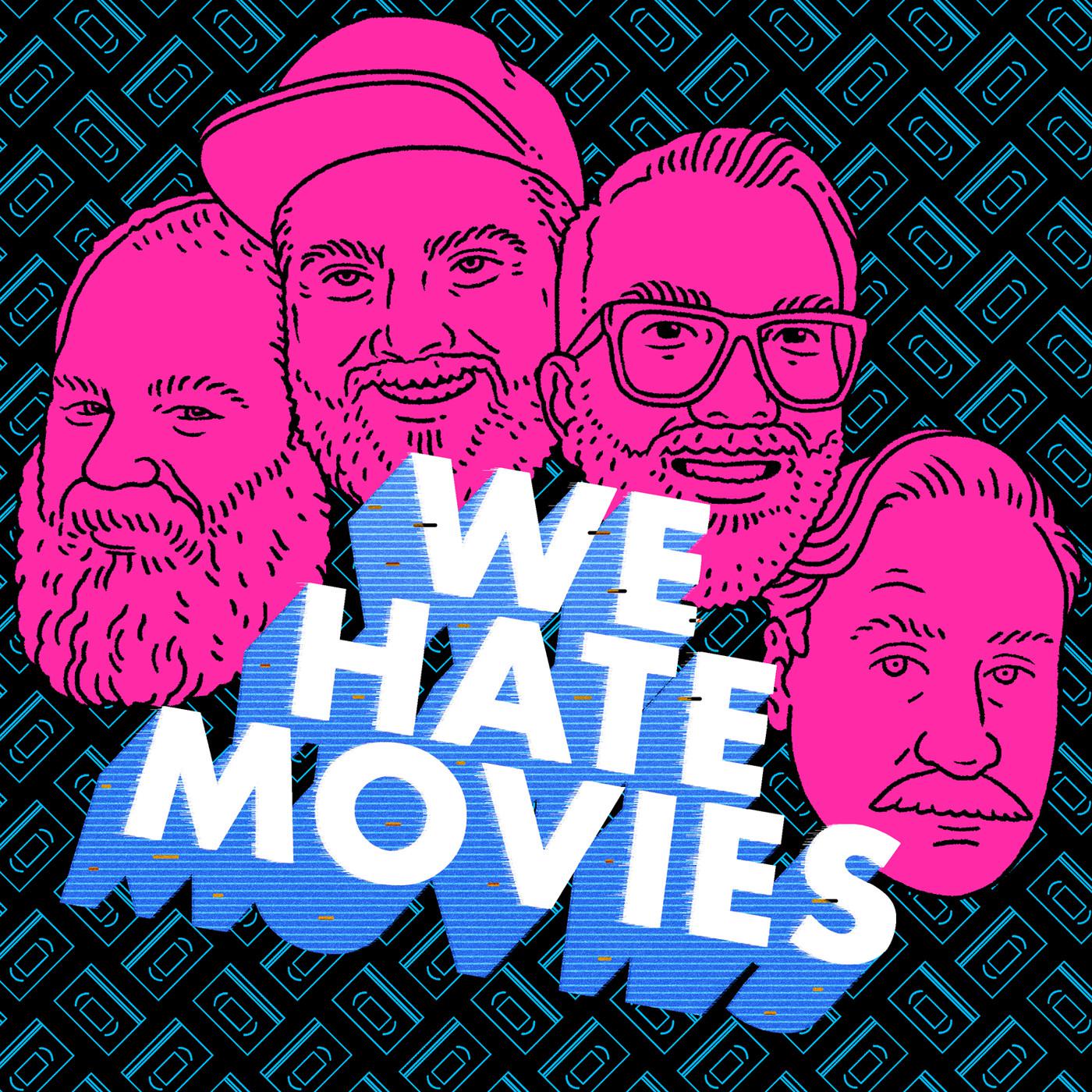 Taglined “The best part about bad movies since 2010”, We Hate Movies is a comedy podcast that is tailored to film lovers that relish in what some might consider trash.

The story goes that Queens residents Andrew Jupin, Chris Cabin, Eric Szyszka and Stephen Sajdak had too much spare time and decided to take their love of watching “bad movies” over drinks and their appreciation for dubious impressions to the next level. In 2010, they plonked a few mics in a room and over 400 episodes later, the gang are still going strong, bringing their signature irreverent humour and tangential asides to discussing the good, the bad and the ugly… Mostly the last two.

Highlander III: The Final Dimension, The Flintstones, The Fast And The Furious, Venom – their back catalogue is extensive to say the very least. The humour and banter won’t be for everyone but remains more hit than miss; as for their new weekly Beverly Hills, 90210 / Melrose Place chat show (a nostalgia trip created especially for these social distancing times), it’s a great quarantine listen and a perfect navigation through the innocent 90s and its heroic mullets. 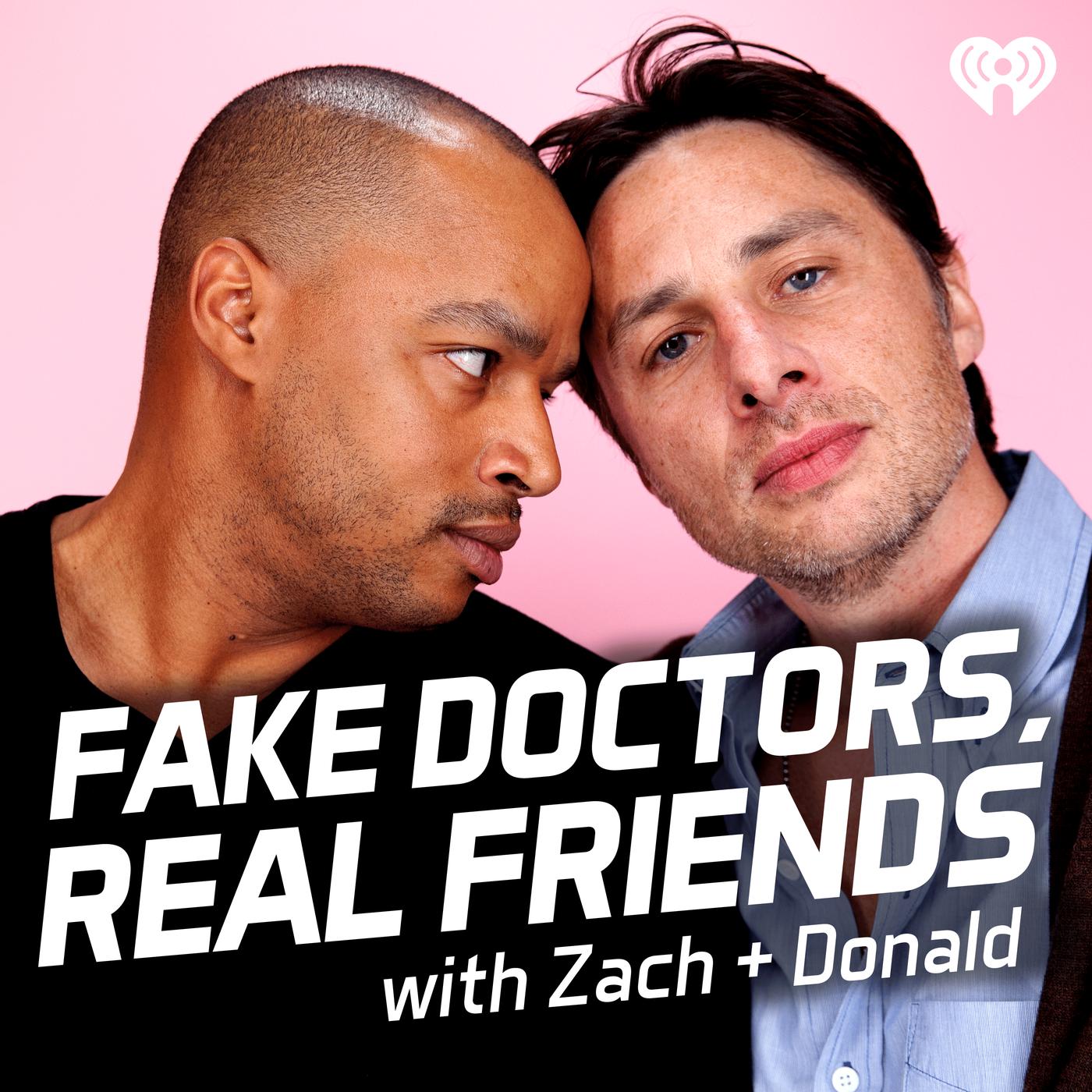 We end with the baby of the list. Only 2 episodes old, the newly launched Fake Doctors, Real Friends focuses on a sitcom but still gets an honourable mention.

19 years since it first aired, Scrubs is often underpraised as a strong and surprisingly innovative ensemble sitcom, a primetime TV show that had the uncanny ability to punish your tear-ducts with excellent slapstick and surreal humour as well as hitting the feels. Central to the show’s appeal was the bromantic dynamic between JD and Turk, a friendship that actors Zach Braff and Donald Faison share in the real world. The two BFFs have reunited to create a weekly quarantine podcast that sees them dissect Scrubs episodes and share behind-the-scenes anecdotes.

Granted, the title is cringey and the whole endeavour sounds like the kind of self-congratulatory living-past-glories mess that pushes people to slam their heads through walls. But fear not, it’s not that kind of show. Aware that it could end up crossing over into insufferable back-slapping fuckery, this iHeartRadio original is actually quite clever: it balances Braff and Faison’s genuine camaraderie with candid insights into the auditioning process, nerve-shredding tablereads and the not-so-glamorous realities that jobbing actors face. Beyond the fan-wooing on-and-off-set stories, Braff opens up about his early career as a waiter-actor and his love for 1983’s WarGames, and Faison discusses how he thought Clueless was going to be his big break and the crushing realisation that things might not be that easy.

It may be too soon to judge, but the first episodes are promising, and this could be a podcasting curio worth cherishing. And even if it’s not your bag, it’s worth it for the pricelessly earnest American ads about social distancing in the times of the Coronavirus: “There are other ways to say ‘hello’ – salute, smile, give the peace sign, do jazz hands…”

That’s it from us this week. Happy listening, download copiously, be kind to each other, do jazz hands, and stay tuned to exberliner.com during the coming weeks for exclusive content and more home-viewing (and listening) tips.