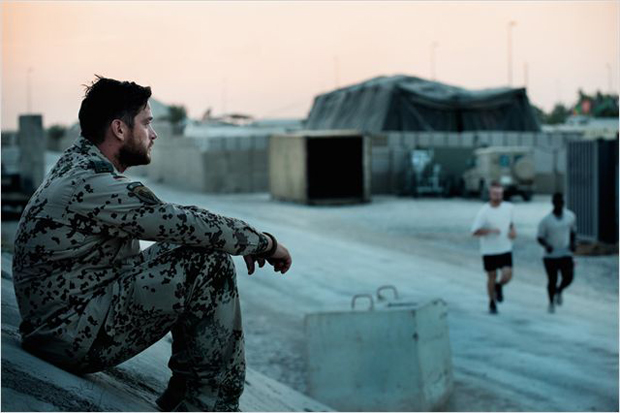 After the success of her Die Fremde (When we Leave) at the 2010 Berlinale, Feo Aladag returned this year with Zwischen Welten (In Between Worlds). Her total immersion in the world of a German ISAF unit and the Afghan village it’s assigned to protect in a region threatened by increased Taliban activity raised some hackles at this year’s festival for its portrayal of contentious military engagement. The director explains her take on alliances, allegiances and the future of Afghanistan.

Why make this film?

The first patrol I did was with German soldiers and patrolling through an Afghan village north of Kunduz. They had their sunglasses, their helmets, their jackets, their weapons, maneuvering themselves through this dusty road with people standing in light, colourful clothing, kids and men. Occasionally a woman in a burka with some Asian H&M plateau shoes underneath. There was no communication between those two worlds. One world was in awe, looking at these steel animals moving through their village, and the other side was scared of who’s standing there, who’s watching them. If you get involved, if you engage in a mission like this it’s about really looking at each other, communicating with each other. Seen very naively, it’s a little bit like The Little Prince: once you engage, once you’re open and offer friendship, you’re responsible. You can’t just pull back and say: we failed, or we did it because of the world community or because of the Americans or because we didn’t do it last time.

And I was sick and tired of the image Afghanistan has in the international media. If you turned on the TV, what you saw was IED, was Taliban, was war, was hopelessness. So it’s rarely been about younger people in Afghanistan, about how they interact with the ISAF forces. It’s rarely about a window of hope and opportunity and what’s at stake it you don’t try to open that up that window a little bit.

You shot in Kunduz und Mazar-i-Sharif, where German troops are stationed. How long did you spend there?

We had four research trips of two to three weeks, pre-shooting. Two trips focused mainly on the German soldiers, with me going out on patrols with them, living with them, staying in American camps and Afghan camps north of Kunduz. But we had some trips where we just lived in hotels, doing research.  And most of our locations are outside the camps. We were mostly involved with the Afghan people, with Afghan cast and crew and people who helped us facilitate the shooting.

The Afghan landscape is shown as harshly beautiful. Was this how you experienced it, as an outsider? Or how you imagined soldiers seeing it?

Both. But interestingly enough we brought our Afghan line producer to watch the film at the Berlinale. He’s a film producer himself and when he came out of the Berlinale Palaste, he said: “You know what? I never saw Afghanistan that beautiful.” The lights and the views are astonishing, no matter where you put up a camera – and this was something I saw with the soldiers too. Most of those guys carry little pocket cameras and they do take lots of pictures because it is an astonishing beauty, and harshness and rawness. I think it’s the ambivalence of all the rawness and the harshness versus its beauty that makes it so interesting but also so hard to grasp and get a grip on – for those guys and everybody else.

Your film is concerned with authenticity. What do you mean by that?

It was very important to me also to send a signal politically. To say, this is something we’re creating together as an Afghan-German team, with united forces. You could do it, obviously, in Morocco, in other parts of Africa, in parts of China, from the landscape and light. But it would have betrayed the content and why I started out making this film.

Your main character, Jesper, finds himself torn between a humanitarian response and engagement regulations. Does this reflect on the special difficulties of Germany’s ISAF participation?

I think it’s typical for all people deployed in this ISAF mission in Afghanistan. You are very limited in what you can achieve if you don’t put your troops at risk. On the other hand, it’s also typically German. Talking to German soldiers in Afghanistan, many were a bit annoyed at the limitations: how little they were able to do the ground work. Seen from Berlin, that’s very understandable. Every casualty makes it politically so much harder to keep the mandate and stay on track. It makes total sense, coming from where Germany is coming from: a traumatised attitude towards killing, fighting, dying German soldiers, something that was not supposed to ever exist again. That’s probably part of why there are no contemporary German feature films on contemporary conflicts. There’s a big fear of portraying this. But I do believe that telling stories, making films or music or whatever it is we do creatively, helps trigger a dialogue and shift perspective.

With these soldiers, especially at Jesper’s level, it’s action more than words – your opening and closing scenes are wordless.

This was something that I observed on many, many levels. Being in Afghanistan and being with soldiers. Not everything we experienced there could be put in words. There’s also a great speechlessness between the two cultures, especially if you get rid of the interpreter. If you lack this bridge, it’s very hard to communicate. Not just on a linguistic level, but on a cultural level.

How do you feel about ISAF’s partial withdrawal in 2014?

I hope the work continues at those levels that are really constructive. I really hope so – for all sides. Otherwise, what was the point? Of so many nations, so many sides making sacrifices. In Mazar-i-Sharif, progress has been made. It’s quite wealthy and safe. But they are very fearful of what might happen after the upcoming elections. Young people, people from Kabul, but also very conservative people who say: I’m scared. Kunduz is different. It’s not the safest place to be. Taliban are regaining certain political positions, mingling more in the power game.

Another Berlinale conflict-themed film ’71 showed a soldier throwing away his badge. Your film ends more ambivalently.

That’s reality. Germany did engage. It did send its soldiers there. It is responsible for the way they are reflected upon in German society. I’m a very practical person. I talk to people who lost somebody down there. How do you explain just pulling back? Germany has to be responsible for the people it engages with. I’m not saying that the media could influence an economic situation in any way. I don’t think so. I’m not naïve. But maybe we can raise questions. I know how hard it is to invest in Afghanistan, all the issues such as corruption. But I do believe that if we don’t strengthen this country at all possible levels, then there’s very little hope for the next generations.