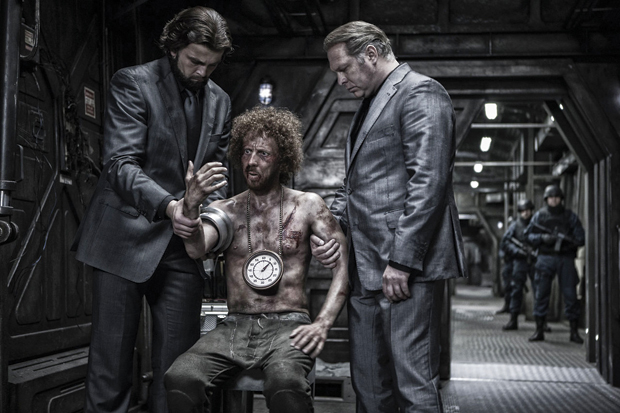 It’s not necessarily the obvious place to break with films that have tended to dystopian environmental subtexts (chemically mutated monsters in 2006’s The Host) or incestuous survival techniques (2009’s Mother). And yet, it’s taken a climate-change thriller based on a French graphic novel for the South Korean director to discover the brightness of being and lightness of hope.

The original French graphic novel, Le Transperceneige, alludes to the snowdrop, a flower which heralds hope at the end of winter. Was it this that drew you to the project?

It makes sense. In the original novel, everything is dark and pessimistic but I wanted to show optimism and hope. But the process to get to that optimistic ending is very harsh and bloody, involving many sacrifices. I didn’t like the ending of the graphic novel.

Jacques Lob, the original writer of Le Transperceneige, included some surreal, burlesque elements that didn’t make it to the final, darker version. Did you know about that earlier text?

I met Lob’s widow three or four times in France. She told me many things about her husband when he was writing the original story. The basic ideas – human survival, set on a train – are from his hand. The story of rich people and poor people, a class struggle – that’s some kind of core that never changes. I tried to keep that.

But the funny moments in the film, such as when the two sides stop fighting to wish each other a Happy New Year, are all your ideas?

All the characters in the movie, all the episodes, the action sequences are not in the graphic novel. I changed almost everything but the basic spirit. It’s about the system, symbolised by a train: an inhuman, repressive system. And in the middle of that system is Wilford and the engine. It’s called the ‘eternal engine’ by Wilford’s people, but it’s a fucking lie. It’s not eternal. This train, this engine, this system gradually goes extinct. The eternal thing is nature, outside. That’s why we see the polar bear at the end of the movie. It’s frozen, but there is new life.

How did you end up casting Tilda Swinton and John Hurt?

I met Tilda in 2011 at Cannes – she was there with We Need to talk about Kevin and I was a jury member of the Camera d’Or section. I returned home and checked the script but there was no role for her, so I changed the gender. Mason was a middle-aged male; I changed that to a female role for Tilda. As for John Hurt, he loved Mother a lot, and he also loved sci-fi. He was legendary in the original Alien… So we had two great actors and that was helpful for the film.

Tarantino is a fan of your work. Was he, and in particular his use of stylised violence, inspirational?

I’m also a fan of his movies. But I think that my approach is different. His violence is more decorative, very visually striking. In my case, I always try to hide something – not show everything. I believe that’s more impactful on the audience. If the audience sees some part of the human body destroyed, it’s a fake: it’s some kind of special make-up. But if that part is just outside the frame, the audience can imagine more horror, more psychological pressure. I feel Hitchcock did the same. More suspenseful, and more chilling. I love that.