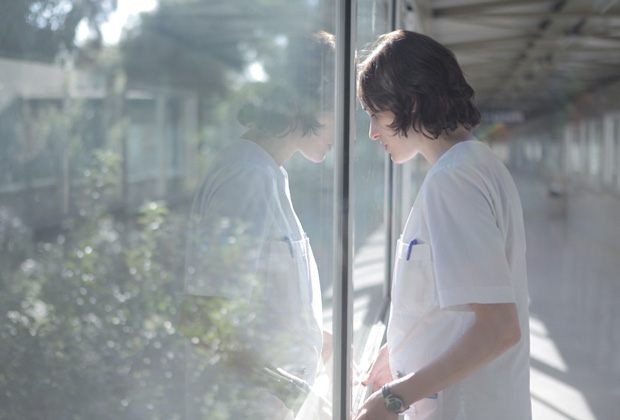 With his second solo feature Dogtooth in 2009, 36-year-old Giorgos Lanthimos took the arthouse by storm, winning the Prix Un Certain Regard at Cannes and earning a highly uncharacteristic Oscar nomination for Best Foreign Language Film.

His next film, Alpeis (out on on June 14), screened to great critical acclaim in the main competition at Venice last year, taking home the prize for best script. With these two films Lanthimos has established himself as one of Europe’s most promising new auteurs and helped turn international attention to the work of a new generation of Greek filmmakers.

In town for a preview of Alpeis in May, Lanthimos spoke with us about his signature style, the recurrent theme of the family in his work and his perspective on his films being regarded as part of a ‘new wave’ of Greek cinema.

Like your previous films, Alpeis presents often extreme situations and handles them by mixing humour and horror, tragedy and irony. What is it that appeals to you about this dialectical approach?

I think because every situation – depending on who you are and where you stand – you can see it in completely different ways. Someone can see something and laugh to death, and someone can cry to death in the same situation. It really depends on the state of mind, what has happened before… so many different things. I think what we try and do is somehow replicate this throughout the film, that any situation can be ridiculous, and tragic, and funny at the same time. It only takes a small shift in your perception to just laugh at it or feel awkward with it or feel bad about it or whatever. I find this feeling of awkwardness – of not knowing really, of having just laughed but then realizing that maybe you shouldn’t laugh and it’s bad, according to other people, to laugh about this – this realization, I think, makes you very engaged and aware of what you’re watching. I think it’s a precious feeling to feel awkward about how you react to a film.

The protagonist in this film infiltrates families as a surrogate member and eventually blurs the limits of her role. This seems to be quite a strongly critical, if not subversive, comment on the family.

Well, it’s definitely a comment, but I don’t know if it’s subversive. I do question even the existence of family and if it’s right the way in which it’s organized. Obviously it’s different for different families and in regions around the world. In Greece, according to my experience – not personal experience, but what I have observed – it’s this institution that keeps children until they’re very old within its structure. Even if they leave home and they’re old, they still have this kind of – sick in some ways – relation and dependence to the family. So, my experience was of that kind – to me it’s a comment of what I’ve experienced.

In your films then, the family is responsible for the stunted socialization of the characters?

Family should somehow prepare you or help you socialize. I think that’s the theme of one or two of my films, that it kind of does the opposite. When it’s done in an extreme way, it somehow prevents you from being independent, from being able to be on your own out in the world. Sometimes I think that maybe at some point the family would stop to exist, and that’s where the beginning of Dogtooth came from. It was like a science fiction idea: what if there were no families anymore? Do we really need them? Why most families fall apart after a while – husband and wife get separated, the single parent has the kid and it causes all kinds of problems – I’m still trying to figure it out.

You seem to portray authority of all kinds as deeply perverse.

I think authority is perverse anyway. It’s not that I portray it this way, that’s what I’ve observed in general. There’s hardly ever a situation which is authoritative and there hasn’t been some kind of abuse. From any party. Or some kind of revolt against it when authority is abused, in different ways. I just somehow take it as granted – it’s not my way of portraying it.

You mention the influence of your Greek experience – do you consider your films as specifically Greek?

In general the themes and the stories are quite universal. Just because they’re Greek films – they’re made in Greece, by Greek people, in the Greek language, and Greek light – somehow, all these elements creep into the film, all of a sudden it becomes a Greek film. At the starting point, they’re issues that exist everywhere. If we made our film in some other place, it wouldn’t be the same in the end. The philosophy and culture and language of the people and the place would come in, so it wouldn’t be the same film, but it would have the same starting point for us.

Your films have been described as part of a ‘new wave’ of young Greek cinema, which includes Athina Tsangari [see our interview] and others of your generation. Do you agree?

No, unfortunately I don’t [laughs]. One thing is, press and journalism in general have the need to label this kind of thing. There are so many different reasons for what’s happened in Greece. The main one is that there’s a new generation of filmmakers making films, so the films are different. There was the fact that a couple of the films became very successful when there weren’t any films shown internationally, so the film community started wondering what’s going on in Greece and trying to find other films that are interesting. But the films themselves didn’t really change. There were always bad films and good films, it’s just that now people are looking into Greece, whereas before they weren’t. And this is something that has happened in many countries, not just Greece – before it was Romania, Iran, and Korea. There’s this need of discovering a new ethnic cinema.

What about the catalyzing role ascribed to the Greek economic crisis?

Greece has been in the headlines now for a while, so that’s a nice combination, a nice package, like: “look, the crisis, the creativity…” Which is partly true, but it’s also by chance. Something that people don’t really look into is that before the crisis all these younger filmmakers – myself included – were privileged to go through a period in Greece where there was a lot of money spent in TV commercials. We don’t really have a proper film school in Greece, so we gained a lot of technical experience through that, and we also made money that we could invest in the films. There is no financing in Greece for films, but I was able to put some money into my films, work for a year without having to work another job, which I usually have to. So that also helped this younger generation make films. It’s so complex, it’s not that during crises you become more creative, and it’s not like there’s a community of filmmakers that help each other, it’s just small groups of people and friends that help each other. And because there’s no financing, people are kind of free creatively – there’s no one telling them what they should do or not do for the film to be more commercial or more successful. They’re free to do whatever they want, which is why they’re more distinguished and individual somehow.