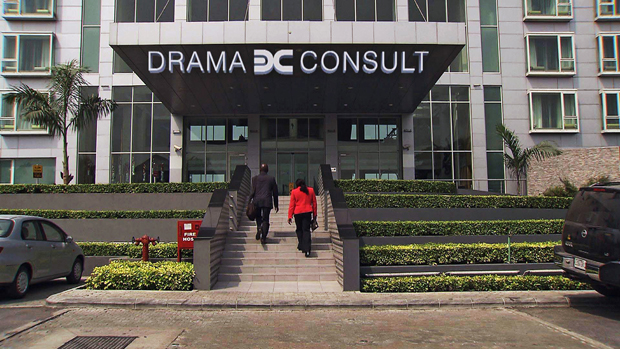 Our next EXBlicks features “DramaConsult” on Tuesday, April 8, 8:30pm at Lichtblick Kino.

Following three ambitious Lagos businessmen as they travel to Germany vying for business contacts and investors, this month’s EXBlicks film DramaConsult fuses elements from reality television and fly-on-the-wall documentary to explore what happens when two very different cultures collide. Berlin-based director Dorothee Wenner is no stranger to the global south, with a history of involvement in curatorial projects covering Indian and African film and a 2008 documentary, Peace Mission, covering the Nollywood (Nigeria’s equivalent to Hollywood) film industry.

How did you, a German filmmaker, become so interested in Nigerian subject matter?

I first came to Nigeria 10 years ago to be part of the jury of the African Movie Academy Awards, and ever since I have been increasingly fascinated by Nigeria. It is not an easy country, I am by no means over-romanticising anything, but I think Nigeria is one of those places where one can see the future of Africa shaping up.

How did you get started on this particular project?

I was interested in finding an angle that was new and fresh and which didn’t step into the existing stereotypes of poverty, ethnic upheaval and all that. Especially with Nigeria the whole aspect of the economy is extremely exciting but rarely talked about. Economics doesn’t translate that easily into film, but when one looks at the different business cultures of Germany and Nigeria (which are maybe the most opposite extremes), one can find cinematic tension.

And that led you to help establish the business consultancy firm DramaConsult?

Yes, it was a deal. From the Nigerian side we offered business contacts, we did a lot of matchmaking. From the German side it was even less of a risk; every businessman always has to look for new markets and Africa is very much on the rise. In Nigeria more than 200 people answered our call for entries. We had a lot of interesting entrepreneurs coming in but I had the feeling that we should go with these people. Even though it doesn’t have a full ending, I wasn’t interested in meetings that went, “That’s a good price, handshake, okay that’s it.” I wanted to explore what makes business work.

Would you say the film has a mission?

Yes, definitely. Nigeria at the moment is the number one candidate for growth in Africa. A country that is so heavily reliant on exports as Germany has to take an interest in exploring what’s going on there and I thought it would be an idea to get away from this existing image of Africans as asylum seekers or musicians.

Certainly it’s very easy to make a film in Lagos where you see poverty and slums and awful sights… but if you look at my film we very deliberately tried to make Lagos look like Wall Street. I wanted to set something against the Africa of wonderful animals, wildlife and poverty. I wanted to show another image of Africa. The difference in German and Nigerian business cultures plays heavily in the film. The time factor is one thing that we discovered to be totally crucial; on a certain level Nigerians are extremely fast, much faster than anyone here when it comes to shaking hands and saying “yes, we are on.”

But other elements, funds and political decisions, really cause delays in project development in Nigeria. When we are comparing the business cultures of Germany and Nigeria, well, one guy from the German Nigerian Chamber of Commerce put it to me this way: he said there are hardly any entrepreneurs left in Germany: they are managing funds, managing capital, without taking any risks. This is the opposite in Nigeria – they have to take risks, they have to fight.

How did the reception of the film differ between Germany and Nigeria?

In Nigeria we had a screening in a multiplex. Despite the film being projected in the wrong format making everyone look very slim, the cinema was packed and the multiplex owner decided to play the film for a full week. What I found so striking was that, in Nigeria, in this packed theatre nobody had any kind of problem with what was created, as opposed to some screenings in Germany where some people felt uncomfortable, saying “Oh, this isn’t really a documentary…”

You mean because you established DramaConsult and arranged the meetings?

Yes, exactly. For me it was like a lab, I was using the film like a lab in which to have real characters acting and in that I never interfered, absolutely not.

Do you have any plans of making a follow-up or looking at this topic again?

The film was at quite a lot of African film festivals, I have a shoebox full of cards from businessmen in Burkino Faso, Gambia, Cote d’ivoire and wherever else I showed it and they all said, “if you continue making the film, I would be very interested in it”. Certainly my next project will develop out of one aspect of what we have been touching on and this whole question of who we think we are.