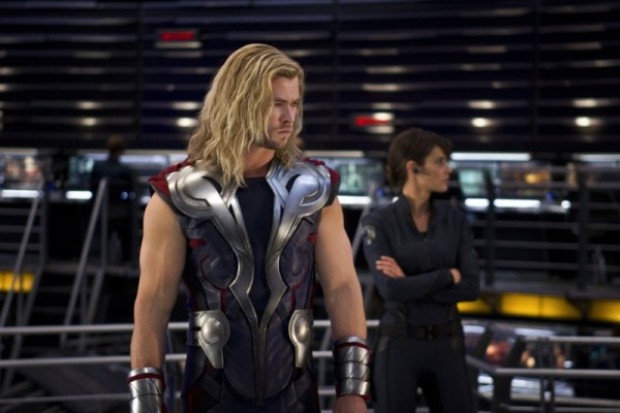 Chris Hemsworth took on the title role in Kenneth Branagh’s 2011 Marvel-pic Thor: a critical and box-office success. In The Avengers, which goes on general German release April 26, he reprises the role of the Norse God of Thunder alongside a collective of superlative heroes – before going solo again next year in Thor 2. Not bad, for somebody who didn’t grow up with comics.

In the Avengers, you fight your evil brother. Did you fight with your own brothers when you were younger?

Sure, but in the best of ways, as siblings and brothers do, growing up together in the Bush, where we had to entertain ourselves. We were close – and competitive in the right ways, which keeps us motivated. But more in things like playing backyard football and cricket or surfing. Not so much in the business side of things.

With work, we appreciate working at all, let alone in films like this, so when one of us gets a job [Hemsworth’s actor brother Liam, recently starred in The Hunger Games and also auditioned for the role of Thor. Ed], it’s a win for both of us.

So no ambivalence in your relationship with your brothers – like your ambivalence with Loki in the film?

We disagree about things, but it’s never been about taking over the world. To simplify things: Ken Branagh said to me when we shot Thor: make it truthful and honest and don’t think too largely about playing Gods taking over the world. That’s the trick because you can’t wrap your head around those concepts in one single moment or argument.

It never is that broad. Instead, it becomes quite basic. You’re disagreeing with your brother. You have an objective and he has one. That’s what I hung onto in the first Thor and in this as well.

You’ve played Thor before and you’ll play him again. What do you see as constants in the role and where is there development?

The origins of Thor’s story had quite an extreme arc. He started out as petulant, arrogant and immature. In the end, he’d learned some humility. He’d evolved and had a better understanding of his position in the world and the universe. This film was pretty much a direct extension of that. What I hope we don’t lose is the humorous stuff, the fish-out-of-water element: that naiveté. That child-like quality is entertaining and also makes it a bit more unpredictable and interesting.

How did you approach your role? By reading Shakespeare, or comics?

There was more Shakespeare in the first Thor with Ken Branagh because that’s what he saw as the origins of it all. When I finished Thor I had a little bit of time off, did the press tour and then jumped straight into Avengers. So I hit the ground running.

It was a different process. I didn’t have the rehearsal time or discussions I had with Ken and was thankful that I already had an understanding of the character. The Shakespearean wording of Thor’s dialogue is on the page from Joss (Whedon, the director) and a lot of that has a different rhythm and emphasis, certainly from the way the American dialogue is written and spoken.

What was it like, playing a superhero? Do you feel any kind of personal connection to the character?

Yeah, I’d like to think I don’t have the ego issues that Thor has. I identify with his passion for things. He’s involved. I like that. I’m pretty self-motivated and committed to things. I can be single-minded, which is great if I’m focused on the right thing. If the energy is on the wrong thing, it can end up in a lot of places.

Are you worried about being typecast as an action hero?

It’s given me work and allowed me to go and do these other things, work with Ron Howard [in Rush, the upcoming biopic of Niki Lauda in which Hemsworth plays James Hunt. Ed], or in films such as Snow White and the Huntsman [summer 2012 release].

When we shot the Avengers, I had short hair and wore a wig and was 20, 30 pound heavier. So I feel it’s easier to remove myself from that character and play something else, easier than it is for someone playing Bond, who is a much more grounded, reality-based character.

How was it working with Joss Whedon again?

Great. I shot Cabin in the Woods with Joss about three years ago now, so obviously we had a relationship. He’s very interested in character, story. That’s where his heart is. More so than in the special effects. He’s a big fan of Shakespeare and Kenneth Branagh. You’ve got to hand it to him for not only directing this film but having written it as well.

You get a rare scene just to yourself: looking for the hammer in a field? What does that bring to the film?

That was the greatest moment of self-doubt that Thor had. He’s started the film with a position and title that he deserves and is mature enough to handle. In that moment he feels like he fails. There’s been a death and he has a moment of wondering: is he going to be able to pick up the hammer? Has he now become unworthy of it? It was a nice, simple kind of moment, Thor stepping back from the action and movement.

Did it get chaotic? So many actors, so many big roles?

The big ensemble stuff was the most enjoyable. It was intimidating walking on to those sets with all those big, established actors. But it was just as exciting as it was nerve wracking. There’s a huge momentum and you have to keep up. When lines are bouncing from seven or eight people you have to pick the moment to let things land. It becomes a bit like a dance.