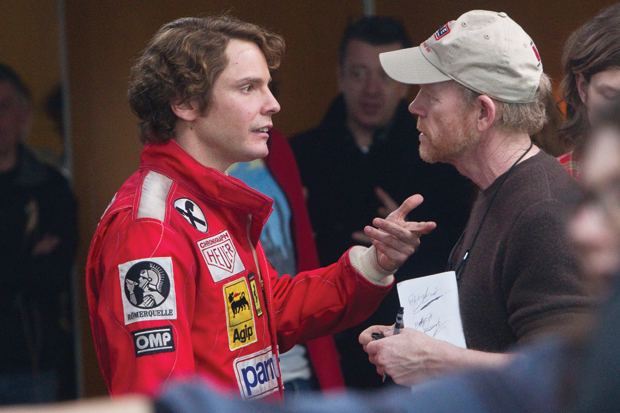 One of the few Germans whose CV features some respectable Hollywood work (Inglorious Basterds, The Bourne Ultimatum and upcoming The Fifth Estate) Daniel Brühl underscores his reputation as an actor’s actor in Rush, Ron Howard’s high-octane Formula One drama, in which he plays Austrian champion Niki Lauda to Chris Hemsworth’s Brit James Hunt.

How did Lauda react to your portrayal of him?

He was blown away, and he’s not normally the most emotional person. I wasn’t used to that from him! During the filming process he’d just go “Yeah, good, yeah…” at the most. And he got so worked up about details. Me wearing a wedding ring at the press conference – he never wore a wedding ring! We both had to be flexible. Before we met he said: “Alright, come to Vienna. I’ll organise everything. Just bring hand luggage. If it all goes to shit, you can clear off again right away.” So I went to Vienna with my little bag and my jitters. Thankfully I had to buy a few more pairs of underwear, as I ended up staying.

You travelled with him, right?

He took me to Brazil, it was ridiculous – in his own Learjet, straight to the Grand Prix. It was a great time. I got to meet all the drivers and watch the race from the Mercedes box. And when you go into the cockpit, and Niki’s flying the plane… you can’t get used to it. It was one of the best flights I’ve ever had – smooth as butter, great food, and in Sao Paolo in 13 hours. And then back with Easyjet.

What about the Austrian accent?

At first Ron said: “Just do it in German. Americans won’t notice.” And I said no, it’s so important to the character… the accent changes the whole demeanour, doesn’t it? I really toiled over it, especially as they took the piss out of me in Vienna in the beginning. I had to force my voice down a little … at first you feel like a demented parrot, you know?

Do actors have the same competition and rivalry as racers?

There are a thousand infamous tricks in film, like not showing up for off-screen scenes with another actor. There are people who expect you to be there while they’re in frame, but as soon as someone else is on camera, they just leave, and you have to do your scene with a total stranger. Then with close-ups, you have to stand very close behind the camera, so the gaze of the actor in the scene is as intense as possible. There are people who very slowly move away during the take, so the gaze changes and you can’t use the shot. That’s a nasty number, right?

What’s the fastest you’ve ever driven?

Around 240. At night on the Autobahn, when there’s no one around. But no faster. Through the film I’ve realised that I’d never make a good race driver – something can happen so fast, and it’s so hard to get a car back under control. It made me realise what a demanding sport it is, not only physically but mentally, having to make decisions in milliseconds. And you can’t see a thing – the mirrors are pathetic. You have to feel how close someone is to you.

Has racing maintained its ‘sexy’ image?

It’s become much more professional, but also cleaner and more sterile. I don’t think any driver today would slug champagne, mess around with a woman, smoke a joint and then get behind the wheel. It was great fun to dive into the time, because it was so wild. They had their fun, you know?