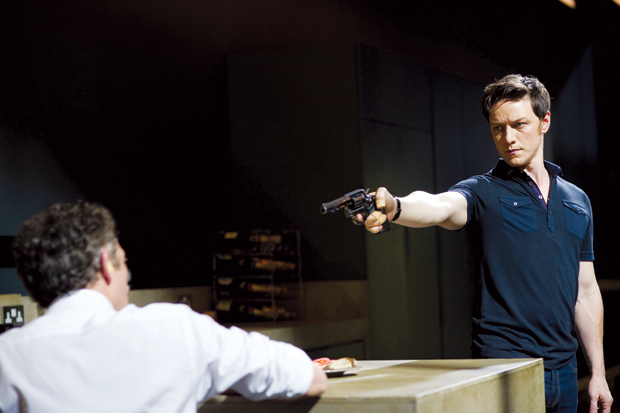 Bathed in hypnotic noir, Boyle’s film celebrates the seedier side of humanity as an art heist involving auction-house inside man Simon (James McAvoy) goes wrong, forcing his violent associates to employ hypnotist Elizabeth Lamb (Rosario Dawson) to help post-traumatised Simon remember where he put the painting – and reveal an agenda of her own.

In Trance, we’re never sure who to root for.

I love people to go in not knowing where they are. We emphasised this in the film. McAvoy’s character is very boyish, handsome, sympathetic. And then you find that out that he’s worse than the rest, or capable of worse. A control freak, drawn to violence. And it’s true of all the characters in the movie. I like that challenge.

Even your ‘femme’ is differently ‘fatale’.

The most important thing for us was that her journey wasn’t about the classic icy, blonde femme fatale. Dawson’s character plays a femme fatale for her own reasons. It’s not a male construct, which it obviously is in noir movies.

Then there are these chronically unreliable narrators, and a basically omniscient camera…

It’s weird, promoting films: you find out more about them. And it’s a good thing. When you make them, if you know what you’re doing all the time, it’s not good.

What’s the difference between your film and Joe Ahearne’s TV version of it?

After I did my first film, Shallow Grave, Ahearne sent me the script for Trance. I knew I wanted to make the film. But he said: “Oh no, I want to direct.” And he hadn’t really directed anything. I said: “Don’t. They’ll make you change it.” He went off and did make a version of it but with very little money, for TV. And they did make him change it.

But your essential story line is the same?

No. The essential premise – hypnotherapist and an idea of a stolen painting – is the same. Otherwise, it’s different. We got John Hodge, who wrote Shallow Grave and Trainspotting, to work on the script. We worked on it for a couple of years and it’s pretty much unrecognisable. It would be unfair to compare it.

So why connect hypnosis to an art heist?

Everybody loves a heist. It’s great to start a movie with a robbery. And stolen paintings are fascinating, researching them, where they are, what they’re used for. Gangs who want to lend each other money or exchange money, they do it through paintings because they’re not traceable the way money is. They’re all in Serbia now, supposedly.

If the heist is a device, what about the hypnosis?

The memory thing is really interesting. Medically, identity is what Dawson’s character says it is: a chain of memories. We began to explore breaking that chain, and the film became not about a stolen painting but about stolen memories and what happens when those memories are reconnected.

Werner Herzog made a film in which all the actors are hypnotised. Did you ever consider that?

We did do sessions. Rosario (Dawson) did a lot of them. We got a professor of hypnotherapy in and James (McAvoy) and Vincent (Cassel) had a go and it was very – boring, actually. I thought: we’re really fucked here. Fortunately, there’s the 5-10 percent of people who, as it says in the film, are extremely suggestible and it is a very powerful tool with them. And also with people who want to change, for whatever reasons. They want to lose themselves in trance. Immersing you in a story is one of the techniques that you use in hypnosis. For cinema, we can then make the camera enter that journey and you can begin to lose sight of things: is this an illustration of a trance, or is this actually happening?