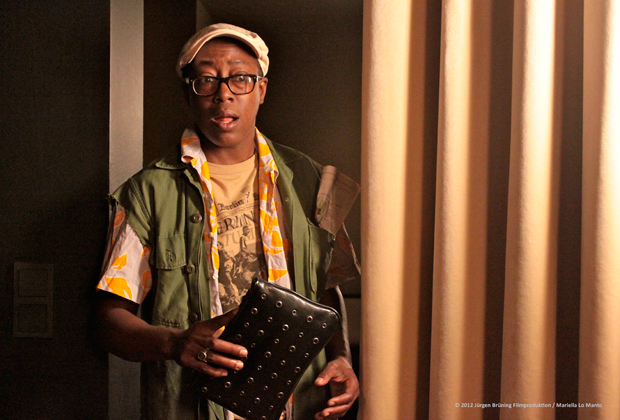 Cheryl Dunye talks about sex and deviance, her new film and engaging film viewers in conversation.

American filmmaker Cheryl Dunye always uses herself in her movies, drawing from own experiences and knowledge, playing major or minor characters. Her aim is to push her own abilities as filmmaker whilst changing people’s perspective on sexuality, race and gender. In Mommy Is Coming she breaks taboos, and specifically the maternal one, in a humorous way here in Berlin.

You don’t live in Berlin, but you’ve made the movie here – why?

I make movies in Berlin because it allows me to be much more creative than with the restrictions around filmmaking and promotion in the US. Moviemaking in America is very predictable; you have to go to Hollywood or find a producer and have a certain status to get a film out there. My films are appreciated much more in Berlin, and I can toy with format, style, genre, and narrative.

Is that why you made Mommy Is Coming?

I made it to explore sex-positive themes in my storytelling. Showing lesbian, queer or race sex on a higher level, being playful with it. One of my intentions was to get people out of their bedroom and out into a public space around sexuality. Once you turn around in the cinema, laughing with someone who’s different from you, you’re like: “This is okay, I can laugh, and this isn’t hard or challenging.” Humor is a great political tool. I also made it to push my filmmaking to another level, and see if it could hold the container for what I usually do: the “Dunyementary”, where a character breaks the narrative, sits down and talks to you – within the context of ‘is it real, is it not real?’ It opens up to people on another level of stimuli.

The whole style to my filmmaking is that truth is fiction, and fiction is truth. Once you have told others about an event that’s happened in your life, it becomes a story. How we pass down these stories is what I like to explore and engage with in my films. And something you don’t get to hear in the context of cinema are queer people telling their stories, or people of color telling their stories. So this is making a container for that, while having fun.

One of the leading characters, Claudia/Claude has some physical resemblance to you – is that a coincidence or intentional?

My intention as a director in all my narratives is to have a lead character who is of color and, at least, exploring their sexuality. Because what films right now can you say has a lead of color –The Help?! One out of the 1000s that come out a year. That’s my goal as director; to feature leading roles of color, because nobody else does.

I read that you yourself are a mother – with that in mind, how was it writing the scene where Dylan has sex with her mother?

Why can’t a woman be thought of in a sexual way, as opposed to just being a wife or a birthmother? I think that people are scared of it. A mother is supposed to stay home, provide for the children. They never get to be the ones out there being kinky. I tried to play with that, because I don’t think we have fantasies as women. Our sexuality is limited.

Presidents have lovers and wives, but a woman steps into that field and she’s deemed a deviant and kicked out of office; the man can turn it around and still get us to vote for him. They still have their power. It’s this relationship between gender and power nobody wants to dip into. So I do.

MOMMY IS COMING opens in Berlin on March 8th.