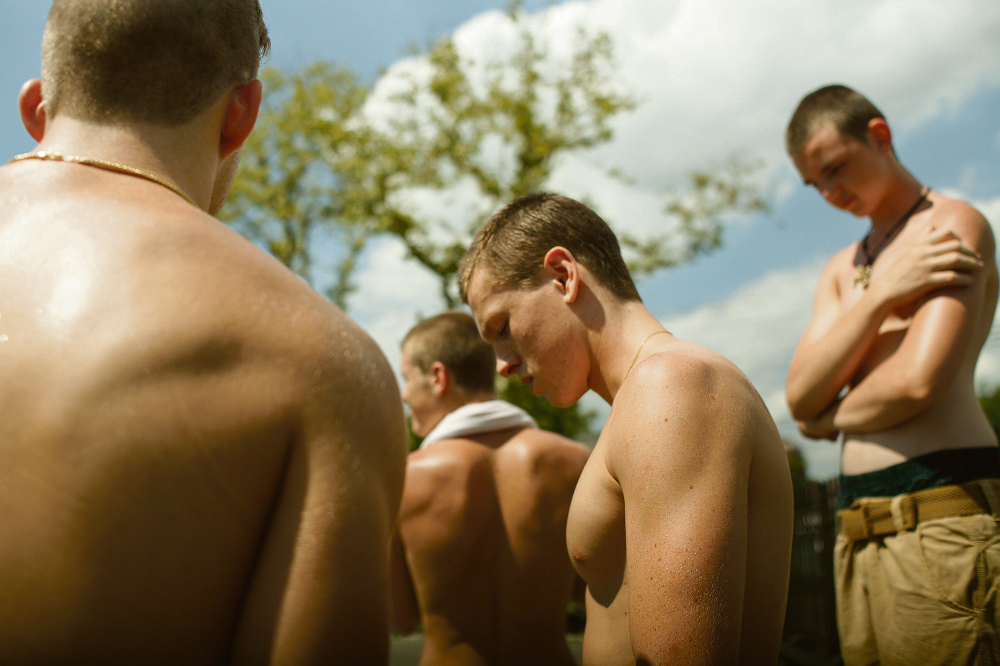 Eliza Hittmann on appropriating the male gaze in Beach Rats.

The New York filmmaker won a directing award at Sundance last year for her intimate tale of teen Frankie (Harris Dickinson), who chases girls alongside his red-blooded bros by day and hooks up with older men by night. Shot on 16mm, it’s a visually evocative portrait of conflicted adolescence. It hits German screens on January 25.

Both Beach Rats and your first feature It Felt Like Love revolve around teenage protagonists.

For me, there’s something very exciting about watching young people act, something open and honest. As actors gets older, they often learn to act too well. Thematically, I’m interested in adolescence as a process, and in the pain that comes with realising something about yourself that may haunt you through your adulthood.

Do you approach screenwriting first with a character or a general storyline in mind?

Sometimes you can have an idea for a movie, and you can make an outline, chart it out, write character bios and do all of their back stories – all this sort of traditional work that people do. But if you sit down to write and you don’t have a character with a voice, then I think you have nothing. So for me the first step is always just writing to see who is this character, see if you can access their inner world and how it informs how they behave in different scenarios and relationships. That’s the starting point for me. I’ve tried to write from doing all this traditional work with index cards and so on, and it doesn’t work for me.

And how did the character of Frankie come to you?

As part of the casting process for It Felt Like Love, I met kids from a neighbourhood in Brooklyn called Gerritsen Beach. Kids there are known as “beach rats”, which stuck with me as a potential title. It’s a very working-class borough, with meth and opiate problems. But the kids also have access to the water, and a lot of them have jet skis. There’s this lazy beach vibe, which you never really associate with New York City.

And then you had the idea to make it about an identity crisis?

That also comes from the reality of the neighbourhood. The beaches at night are cruising spots. So there’s this natural tension that exists between two worlds, embodied in transactional experiences with older guys who I picture driving from the city to the suburbs and stopping at this halfway point. This got me thinking about a character who gets caught between these two worlds.

Early in the film, Frankie is asked “What is your idea of romance?” We never got an answer to that question. Did you have any notions of romance in mind when you wrote this?

I was thinking about two things. On the one hand there’s this woman who’s full of hope and thinking about the myths of romantic love. The fireworks for her represent something totally different than what they represent for him. For him they’re about the stagnancy of his world, because they happen every Friday and thereby remind him of how he’s going around in circles with no way out. When you’re a teenager, you sort of have this mythological experience of love which some of us never really get or understand. I think love in reality can be something quite different from what we’re taught to understand from films. Which is one of my rules about writing: I’ll never write a movie about two characters who just fall in love. That doesn’t appeal to me.

Towards the end if the film, when Frankie is riding the subway, he sees a couple holding hands. That shot really struck me for how romantic it is.

It leaves you with a little bit of hope for the character. It’s a very romantic shot. I sort of wanted to bring the audience back to what the movie is about with that moment. It’s about a character figuring out he may never have this kind of conventional, innocent, easy freedom.

But that’s so sad!

I know, sorry! I’m not very optimistic, especially these days!

Last summer Kathryn Bigelow was criticised for telling an African-American story as a white woman in Detroit. Were you worried about making a film about masculinity?

I was nervous because women are always attacked when they step out of their lane. There’s a tragic expectation that women’s work should always be a reflection of being a woman. As soon as a woman tries to tackle history, politics, or issues around men, there’s always a personal attack. Obviously there are issues within the system about letting marginalised voices have opportunities. But I don’t think that every time a woman makes a piece of art that’s slightly outside her own experiences, she should be torn apart in a witch hunt.

Well, the TV world opened up to me, which has given me an opportunity to make money directing for the first time! Culturally I think Sundance is very much about funding the next ‘it boy’. Even with a film like ours that plays well, you’re always in the shadow of some movie that sells to Fox Searchlight for $10 million because they think they’ve found a new ‘it boy’ director.

What inspired the film’s hazy visuals?

I worked with Hélène Louvart, a very experienced French cinematographer. I showed her photographs by Barbara Crane, who did a lot of Polaroid work in the 1980s. She did these close-up shots of people’s bodies touching each other in the summer heat. They capture sexual, private moments. Hélène really liked this style and we talked about bringing that to the beach, as if we were turning on a flash-light and catching animals creeping around in the darkness.

Did you feel you were taking a risk casting British actor Harris Dickinson as Frankie?

He was the best person we auditioned, but I was terrified that he wasn’t going to blend into this world. He’d never even been to Brooklyn! But he hung out with the other guys before the shoot, and played handball with them. We talked about his posture, but ultimately he found the character by himself.

This film has travelled to several European film festivals, including the one here in Hamburg. Have you explored the possibility of one day making a film here?

I was just in London and met some people at the BBC. I’m definitely intrigued by the prospect. I don’t want to stay in New York forever. I mean I’ve been lucky because I have access to a part of the city that people don’t look closely into. But at some point I would like to broaden my canvas.