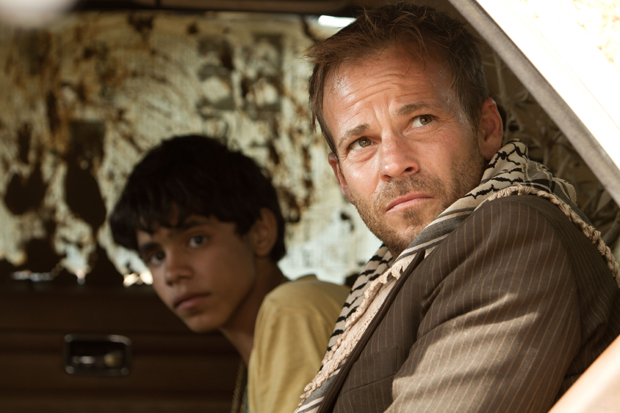 Eran Riklas’ returns with nuanced pace and sparse dialogue in his most recent film “Zaytoun”.

After The Lemon Tree, The Syrian Bride and Playoff, Israeli director Eran Riklis returns with Zaytoun: the story of a young Palestinian boy and an Israeli fighter pilot who rise above circumstance to bond on a road trip through emotional, physical, political and ideological difference.

Your movies are about identity and home. Define home.

It’s always a long way home. I remember when I did my first feature: On a Clear Day you can see Damascus – it was part of my graduation film – and came back with the first images of the film: there was this opening scene where you saw the protagonist in the middle of a wheat field, all yellow, with blue sky and clouds. The field, the sky, the clouds – that’s home. Already then, I started realizing how I can find images, words, sounds that convey things which, sitting in Berlin, Beijing or London or LA, feel exactly the same. Especially if you come from the Middle East, where everything is so charged, so misrepresented and a word like home becomes political, instantly. What is home for this Palestinian kid and what is home for this Israeli pilot? Even the definition of land is different: Israel, Palestine, etc. Through these images that keep things simple and emotional, I reach definitions. So the answer is: it can be anything – as long as it’s simple.

But it’s never just individual: In Syrian Bride, Lemon Tree, Playoff and now Zaytoun, individuals grow to accept other people’s definition of home: there is always this duality …

Whenever I’m asked whether my films are political, I say: no, they’re not, they’re about people caught up in political situations and decisions made by others for them. I see it in Israeli society: people are tending to seal themselves away from the world. What you see is a growing tendency to say, okay, this will never be resolved, so forget it. Let’s just put a wall between us and the other side. A physical wall, but mainly a mental wall, and then we’ll worry about our education, jeeps and kids and whatever

It’s true: I can sit here and say it’s a horrible thing but obviously I’m part it. I think the reason I make films is to remind all of us, wherever we are, that it doesn’t end there. There’s another garden just next door and the roots underneath are mixed together. That’s the essential thing.

Hence the trees: The Lemon Tree and now the olive tree in Zaytoun?

When this script reached me – and it’s not my script – I said: come on, forget it. Lemon trees and now olive trees? It’s a joke. At the end, it’s not about trees but trees are a great, subtle representation and in this case, really integral to the story. You can almost see history on their trunks.

The natural environment plays an important part in Zaytoun, as it did in Lemon Tree: as a thing of beauty, a symbol bearer, as territory. Is this concentration specifically Israeli?

I’m very careful with meaning. It’s two things. One: I get all these images which are full of meaning but I’m not always aware of it, or try not to be aware of it and portray something that is democratic in the sense that I see something, I feel it, I show it and then I let you, the audience, make up your mind how you want to look at it and what feelings you get. On the other hand, everything I just said is a lie because I’m very aware of what I’m doing. I’m a manipulator, that’s my job, in a way, as a director. Obviously, I care about every inch of the frame. I don’t know.

That’s what so exciting about being a filmmaker in a country like Israel and a region like the Middle East, because it’s a never-ending story in terms of images and how you use them.

Zaytoun is a very specific story in a very big genre: a road movie in a very small country. Bit of a challenge?

Totally. At some point I was sitting with my production designer and saying: I want colours to come and go: we start in Beirut, we go to the mountains, we go to the shore…  and then, when you check your facts, it’s 120km from Beirut to the border with Israel so our story takes place over 120km. It was tough, not because of Israel: you can find 20 different kinds of landscape there within 20km. What I was worried about was, how many more valleys or mountains can you see in one film? That’s why we started injecting scenes like the one in the old amusement part. On the one hand, it’s a road movie. It allows you to go almost anywhere, that’s part of the genre. You can stumble on any character in any location. On the other hand, we wanted to keep it real so if somebody checks, the journey somehow makes sense. And thirdly, keep the visual variety.

This openness, this absorbing of landscape into the characters was really about saying, “We are specific but yet we are not.” We could be anywhere within Israel. But it’s not about going back to a specific place.

In Zaytoun, all the scenes of the PLO camp where the kids are training, it’s a soccer stadium. I found it in a village called Kafr Qasem, a very beautiful location, 25 minutes east of Tel Aviv. As we are walking there I see something like 40 graves painted in green: those are the shaheevs, the holy ones massacred by the Israeli army back in 1956. So you’re standing there and on one hand, you there, you’re a guest, you’re about to shoot a film, there’s a circus moving into this town, everybody’s cool, everybody’s helping you, everybody’s nice: and you suddenly realize, the history of this place and what it means. Yet on the other hand, it makes you relax. Something good is happening here. These people have a history, they respect it, they live it, they feel it. So part of the reason of being open to the landscape, both on the Lebanese and especially on the Israeli side, was that because the kid was on a mission, he just wanted to find the village and plant the tree. But on the other hand, it was like: you are here, come and absorb.

How did Stephen Dorff react to the physicality of being in Israel? Were you able to work with that: the sense of threat, of enclosure on somebody not normally aware of it?

The simple answer is that he felt it in every bar that he visited every night. Basically, he came to Tel Aviv and immediately became the toast of the town. The Hollywood star.

When I met him in New York for the first time, I called my produced and said: forget it. The guy is totally Malibu. Palestinians? Rings a bell? I really had a bad feeling about it. I met him again and then I felt: he’s curious, he really wants to learn. He has a Jewish father. There’s always some link. Then, the whole point was that I said to him: listen Stephen, I have to take away your Americanism and turn you into an Israeli pilot. The pilot was the easy side. A pilot’s a pilot. But being an Israeli? You have to be here, you have to meet Israeli pilots. It’s a specific thing. Understand how this country ticks, how Israelis tick.

Our perception (in Germany) on Israeli attitudes to religion in coloured in part by the American press, and their specific and interested views on the matter …

Well, it’s true and if you ask an average person in Israel, what’s the biggest threat to society the answer won’t be Palestinians but the religion because the secular-religious conflict is probably the biggest conflict. It has a lot of branches. It has to do with serving or not serving in the army: many religious people don’t go into the army and yet they demand the same rights as somebody who gave three years of his or her life to the state. So it involves a lot of emotion. On the other hand, Judaism is built into Israeli DNA because of history, the Holocaust, so many things. You can’t say religion: forget it. But getting into it simply demands a good story. I think I’m always triggered by good stories. If I find a good story that involves religion, I’ll be happy to do it.