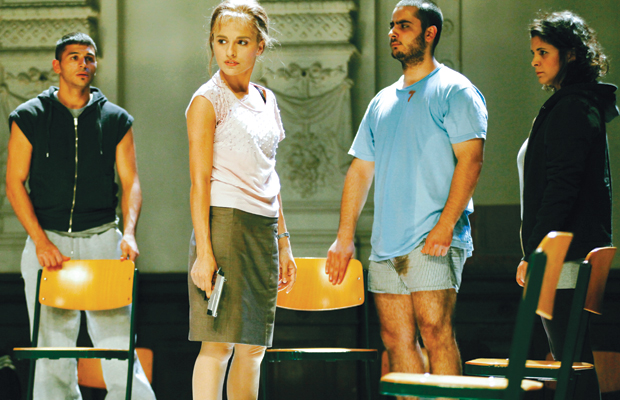 Nurkan Erpulat’s rising fame in German theater defies all the media clichés about Turkish immigrants. An actor who arrived in Berlin in the 1990s to study directing, Erpulat has worked his way up the slippery ladder of the directing scene. His works have been shown on the city’s best stages, from the HAU to the Deutsches Theater.

But it’s Verrücktes Blut (Mad Blood), a play co-produced by the up-and-coming Kreuzberg theater Ballhaus Naunynstraße that won him the honor of an invitation to the Theatertreffen, among nine other “most remarkable productions in the German-language theater world.” Loosely based on the 2008 French film La journée de la jupe (Skirt Day), the production deals with violence in the classroom, and touches on the themes of integration, language and identity.

Your work is rarely based on an existing text, so how did this work originate?

The idea came from the Ruhrtriennale. They have a three-year program with three religions. The second year [2010] was Islam, and for the school part of the festival, they wanted to do something about youth and they found this film. For me the film was problematic: these male youths are portrayed as violent, and as victims and criminals at the same time, and by the end they’re still the same.

My gut feeling is that everything that is going wrong in Germany is perceived to be the fault of these young men: they are uneducated, they are violent, they are Schwesterhasser, they are homophobic. They’re these really poorly presented black sheep. Clearly there are problems, but I think the way they are handled is not the solution.

How did the texts from Schiller become part of the piece?

One student brings a gun into the classroom and the teacher grabs it and then directs it at the students and says, “Listen to me, now we learn.” This appears in the film as well, but then there is this moment when the teacher reads Molière and other problems come up. But it was those 30 seconds I found very interesting, so we took them and made them three fourths of the play.

[Speaks as the teacher] “You don’t know how you’re going to do things better, but I know and I’m going to teach you. And you must learn to be free [points imaginary gun towards head], so be free!”

She uses Schiller to give them values that they don’t have, but it’s very ambivalent and it’s not just one way. We took the Schiller texts and improvised around them. The students learn to adjust their idea of what girls are, that they’re not always sluts, through Kabale und Liebe, and they learn that they shouldn’t use violence through Die Räuber.

How does the piece fit into what is happening in Berlin theater now?

In the last five years there has been an interest in the theme of what immigrants offer, but it didn’t come from the theater – it came from the government. The government said: “Dear friends, we’ll give you money, but we want to see more intercultural openness.” And that’s when the theater community finally noticed it had to do something.

This is special in Germany. In all other countries, the theater is more progressive than the government. Twenty-five percent of the people in this country have Migrationshintergrund. That’s one in four. Germany had been dealing with this for a while but the theater scene hadn’t. It was already happening in dance and opera, usually much more conservative forms. Asian dancers have been around for 20 years, but there’s still no Gretchen in Faust that has black hair. It’s unbelievable, really unbelievable.

As a Turkish director working at the Naunyn, do you feel restricted by the subject of immigration?

If I try to tell a love story – and I haven’t told this story, but just as an example – and coincidentally one of the protagonists is named Aisha, it doesn’t mean that the theme is immigration; the theme is love. There is no such thing as an ‘immigration theme’. It doesn’t exist.

If I was telling the same story with socialists in 1936, it would still have this theme. I would like to be involved with another project, a musical about King Kong… But you could also see King Kong’s story as an immigration story.

Why did you decide to come to Germany?

I wanted to go to Paris. I did a thesis about Jean Genet and his play The Maids. For actors, they wanted like 30 or 40 pages, but I wrote more than 100. And I just wanted to go to Paris, all the things to see and gay life, as well – the whole Paris scene. At the same time I was very punky and the Dreck, dirt, of Paris attracted me. But then I found out that it’s much harder to immigrate to France as a non-European, someone who needs a visa, because of the requirement to start learning French for six months before immigrating.

For Germany, there aren’t so many German-speaking foreigners, so they make it possible for you to come to Germany and first start learning the language when you get here, in order to go to university, etc. Germany was simpler than France. But I am very happy that I decided on Germany, and especially Berlin. The options that you have here when you want to go out to the theater – this melting pot of options is unique as a theater scene. It’s not in Paris and it’s not in London.

What was it like to be gay in Turkey?

It’s very problematic there, but it’s not a country where they will kill you over that. In the big cities it’s problematic, but it’s okay. It’s not like in Iran, where it’s illegal. There is nothing in the law about homosexuality in Turkey, negative or positive. It’s like there is no homosexuality. It’s a way of the government keeping quiet. But homosexuality in Turkey is an old tradition, there’s no question. Transsexuality is different. Starting in the 1980s, you could easily be transsexual. We have two different ID cards, for men baby blue and for the girls pink, but if you are transsexual, you can change your color very easily.

Do you find it possible to have a personal life alongside your professional career?

I’ve always chosen this life. My family is the theater; I don’t have any other family. Of course, I say I want a house and a dog. But I don’t know, maybe I watched too many musicals when I was a child. I say to my boyfriend, “Actually I’m married to the theater. You are my lover. But the theater is my husband, my wife. And sometimes we can go out and have sex and what else, but I’m married already.” And I choose this life. Is it good or bad? I don’t know. But it’s not normal.