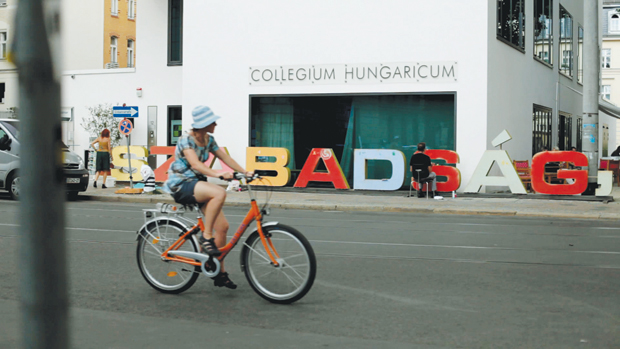 Our next EXBlicks presentation, as always at Lichtblick Kino and as always in English, is My Hungary in Berlin on Monday, June 10.

Actress Rita Lengyel, known mostly for her work in films like Berlin Calling and Sonntag im August, presents her first ever documentary My Hungary in Berlin for the next installment of our always engaging EXBlicks evening, in cooperation with realeyz.tv. In it, Lengyel, who was born in Düsseldorf in 1973 to Hungarian parents, explores her family’s history between Berlin and Budapest, Hungary. The result is a film about losing, finding and accepting identities and what roles a family has to play. Join us on Monday, June 10 at Lichtblick Kino at 8:30pm for not only a portrait of a remarkable family but also an ode to personal reinvention and discovery.

Did your relatives all agree to participate right away or did some need convincing?

My mother was quite hesitant. And there is a lot that isn’t shown in the film. It’s always a thin line when you choose what to show. I did not want to make this film to get things off my chest because then I would have used 500 minutes. So, the question is, what can I tell in the time I have and what do I want to tell to make it a coherent story. That was the main difficulty making this movie.

Did you decide what was important to tell or did your family have a say in what to show?

Basically, I was given free rein to do as I wanted. There are things that I did not include because I knew I would have to make another movie about them. For example, I could make a whole film about my grandmother and the time she lived in. Or about my uncle. You could make a movie about all of the protagonists. That made choosing what to show even harder.

Did your family see the movie before it was released?

Before the premiere, there was a private screening for the family. That was very important to me, that I could see the film first with my family. I wanted to see their reactions and emotions without any interference.

And how was the reaction? Did you all learn something new about each other?

Yes, absolutely. My family saw their own story in a very compact way and also my view of their life. That quite wowed them. On the one hand, there were reactions like: “Oh, right… that is why we are who we are.” On the other hand, my mother, for example, was astonished to see what exactly I found interesting about her. Like, when she talks about [the fact] that she was married three times. I could have included other facts about her but that was what occupied me when I was little. That wasn’t easy for her to see. But it was what I was thinking about a lot and what the film helped me to make peace with.

Why did you decide to not appear as a protagonist in the film?

That was a very conscious decision, about which I thought a lot. Four weeks before we started shooting I decided that I wanted to be seen once so that I would be physically present in the movie. However, I wanted to stay in the background. There were two reasons for that: firstly, it’s my first documentary and I didn’t want to overextend myself. With so many protagonists it was important that I stayed behind the camera and worked with my team. Secondly, I was able to give the other protagonists more space [to tell their story].

Your family, in spite of everything they went through, had a very optimistic attitude.

That brings us back to the point that I hope others can identify. You need a lot of optimism in life to not lose yourself. And something else that I found out through my film was that everything that we went through makes us rich. You have to go through dark times and have to have felt the fear of losing everything to get rid of that feeling. That is life’s principle and I wanted the film to show that. I could have edited the film to make it a sad one and we have sad moments in the movie. Those moments are there but I found it important to show the protagonists’ optimism. The clown is stronger than the devil. That is the maxim I grew up with.

One of the protagonists in the movie says that it would be nonsense to decide between two nationalities when you are trying to find an identity. Do you agree? Was the film part of your search for an identity?

Yes, that was the incentive behind the making of this movie. I was very lucky to define myself through working with those people, including the band Rotfront, which is part of this patchwork family. I mean, you can never stop defining yourself because you keep on living, but I don’t bicker so much with my identity anymore. Now, I live my identity and that makes me very happy.

The film was shot in German and Hungarian. How did you decide which language was spoken when?

When we were in Hungary I let the protagonists speak Hungarian. That was a very natural process. My uncle, when he is out and about with his friends in Hungary and speaking about Germany and Hungary, he could have spoken German but in this place he speaks Hungarian. It would have been stupid to have made him speak German.

Do you think that your family’s story would have been another one if it hadn’t happened partly in Berlin?

Yes, absolutely. Berlin is an example of the new European history: it is here that East and West meet, it is a melting pot, so many immigrants came here and left from here. There has always been fluctuation.

And did this special place Berlin make things easier or harder for your family?

I can’t think of difficulties, only that it is very enriching living here. Berlin is special.