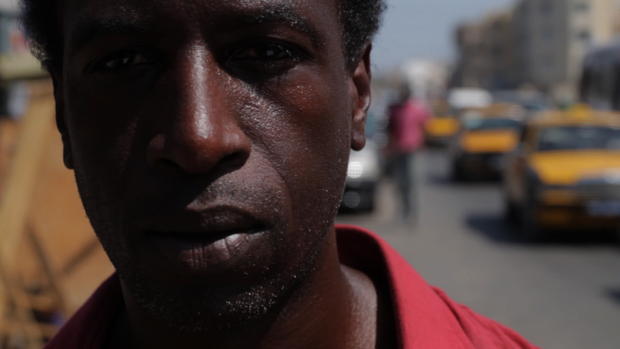 Anticipating the upcoming screening (Sunday, Sep 15, 17:00, Kino Hackesche Höfe) of “Tey” (Aujourd’hui), Exberliner talked to American poet and musician Saul Williams (Slam) to find out what it takes to play a Senegalese man on the last day of his life.

An audience favourite at last year’s Berlinale, Alain Gomis’ Tey follows Satché, a still young married man and father on his last journey through the streets of his hometown. As the man bids farewell to friends and family, it’s a poignant portrait of redemptive and comprehensive acceptance and a vision of what it takes to say goodbye that we’re given to witness. Don’t miss!

What is an English-speaking poet and musician doing in a French-Senegalese film?

Alain [Gomis] actually wrote the film looking at a picture of me!  He spent a year writing the film and then he departed for Senegal to start pre-production. On the day that he left I bumped into a friend of his in the street who said: “My best friend wrote a film for you and he asked me to go to the States to look for you.” The next day the production company showed up at my house with a script with my picture in it. I spent the next month learning to read it in French, translating what I didn’t understand and loving the script. Then we had nine months to prepare it. It was as simple as that.

One of his friends bumped into you? Where? In Paris?

Yeah, getting out of the Metro going to the bank at nine o’clock in the morning. He came up to me and said, “Aren’t you…?” and by the end of that week I had a contract.

Gomis actually confessed he had used your name to approach producers! You could have reacted differently….

Yeah, for sure. But my background’s actually in theatre. I got my Masters in acting from NYU. I wrote Slam while I was in theatre school.

Slam came out almost 12 years ago. How come you act in film so little?

After I did Slam, which meant a lot to me, it was difficult to accept when someone said, “You wanna play a cop?” or the funny black guy who sits next to the handsome white guy in this movie. So I had more fun writing poetry and music over the years. On the one hand I’ve been writing and on the other, I’ve been waiting for something interesting.

Do you still consider parts offered to black actors too clichéd?

The productions on screens in America are caricatures of white and black people. But there are a lot of opportunities there. It depends on what you’re into.

But these days you could play a president…

Yeah, but there are not many films you can name where there is a black president. The point is simply, I didn’t find a lot of stuff interesting.

Tey isn’t a political film at all…

No, it wasn’t – that’s what makes it interesting for me. That can be really annoying, the idea of a film that comes out of Africa and people are expecting some kind of politics and what have you. Are most films coming out of Germany about the politics of Germany? Sometimes the most political statement we can say is, “Look we’re human. We fear death, we think about death. We fall in love.” In the context of all these waving flags, don’t forget we’re talking about humanity.

As an American who looks like an African it must have been a bizarre feeling to hang out in Senegal and play a local. Was it a cultural shock?

I have no idea where I’m from in Africa. I’m American. It’s a very bizarre feeling on the one hand, but it’s very welcoming, and the first time I went in the 1990s, the sense of homecoming was there. I was in Senegal, Zambia and Mali the first time I went. Since then I have toured a bit, with music and poetry in South Africa.

But this time, spending two months in Senegal, getting used to hearing the language and learning about aspects of the culture that I never saw or imagined… and connecting the dots between there and what I know. It was really cool to be there doing that and to not have to report on it, in the sense of, “I’m your adopted child.” I am so glad the film wasn’t about that, it wasn’t about this awkward feeling of being an African American in this place where I may be from, but I’ll never know.

A lot of Americans are interested in finding their roots. How do you feel about the roots thing?

It’s there. It’s old history, but it’s very obvious to anyone who looks at me, that I am not indigenous to America. Of course it presses upon you that you don’t know what language you would speak, apart from English. I relate to it like someone who was adopted, who was raised by somebody and might be thinking “I wonder where my real parents are from?”  Far removed. Far, far removed.

People took you for a native – they spoke Wolof to you?

Yeah, all the time. I look like I’m from there. People treated me like I was from there. It’s a bit of a mind-fuck, but a beautiful mind-fuck.

You’d been to Senegal before. What was so different?

One was that I stayed longer. When I went there before I visited as a tourist. I went to tourist places. This time I went to houses, I saw how they eat, how they sleep, what the day is like, what the month is like, really in the cut.

Yeah, they eat it every day. There’s not a lot of variety. Coming from New York, it’s like “Let’s eat Italian, let’s eat Chinese, let’s eat this, let’s eat that”… definitely something else!

In the film, you play a man on the last day of his life and what was very surprising and very beautiful about it was how underwhelming his last day is. In a Hollywood film it would have been very different.

Yeah, you think someone might rent a limousine and go to a football game or something. Thank God that didn’t happen.

And if you were Satché, what would you do on your last day?

It could be today. I’d be sitting here talking to you…

Weren’t you superstitious playing a man about to die? It must have been heavy…

It was super heavy. You contemplate that the entire time while shooting the film for two months! And during the nine months of preparation – thinking about the last day. What would I do? What would I do? At the end of the day, you do what you love…

Director Alain Gomis even joked at the Berlinale press conference that just before boarding the plane on your way to the festival, he had that superstitious thought: what if we were all to crash, all together, on our way to show our film?

I know! I’m always superstitious about artists who play with these ideas. Like Jeff Buckley singing about drowning in quite a few songs. So when I heard about his drowning, you know?  So how do I go there without going there?

On a farewell visit to an uncle, Satché is told he should consider himself lucky because “a lot of people might die today, even before you do, and don’t even know about it.” What do you think about that? Would you rather know – or not know?

One of my favourite scenes is when Satché finally goes home and confronts his wife. Unlike everyone else, she’s not proud, encouraging or lovingly empathetic. She’s pissed off! It really stuck in my mind. How was it to play the scene?

That interaction was the most beautiful part of the movie. That was everything it looked like. Anisia [Uzeyman] is such a wonderful actress and we spent a lot of time together during the nine months before the making of the movie. She has this intensity. And she came at the end of the shoot. We’d been there for a month and a half and then she came… and the whole movie changed. The film finally arrived at home.

Is that how you’d like the woman of your life to react?

That person in my life is Anisia [laughs].

Is that the reason it worked so well? Is that how she would react?

I wouldn’t be surprised!