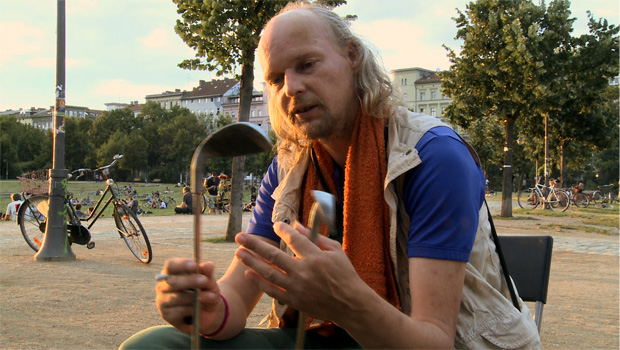 “I’m making a film about Görli – do you want to join?” a faceless voice asks a four-year old driving a toy-size wheelbarrow… Der Adel vom Görli opens with a casual playfulness that sets the tone for the rest of the movie. Director Volker Meyer-Dabisch, himself a Görli-Kiez dweller, tells the story of the (in)famous Kreuzberg park and the ‘friendly’ weirdos who populate it: the kids and the drunkards cheerfully lounging in the sun side by side, the golfers using waste bins for target practice and the hippie musicians and fire jugglers who convene at twilight.

Why a film about Görlitzer Park?

I live near the park, so Görli has always been in my life. I’ve held birthday parties there with my children, run around with my dog, I played saxophone in the piss-tunnel, and as a student I planted plants there when they established the park.

In the movie you don’t tell the story of the place.

No, I wanted to make a film about Görlitzer Park today. That’s why, instead of telling the park’s story myself, I asked the people in the film who have been coming there all their lives to tell the story through their eyes. I didn’t correct them when they said for instance that the crater-like shape in the park comes from bombings during the war. I wanted to give them space for themselves. To show them like they are.

And they are pretty colourful. How did you find them?

At first, I contacted one of the guys playing golf – he’s the one who hits the waste bin (top photo). It took a while to convince him. He first tried to scare me away. It was a test. I wasn’t scared, so finally he said yes. He gave me the advice to just be present in the park. Not to go and insist on people joining, but just be there. So I sat on a bench, put my camera up and made a sign encouraging people to come up to me. And I just sat there waiting. As for the main protagonists, the people who are sort of regulars in the park, the quirky ones; they came rather late. They had seen me sitting in the park and had me figured out. I think it was good I was there alone. If I’d had a big crew with me, they never would have approached me.

Yes – the park is located in the old part of Kreuzberg. Some people here survived, like Sputnik. They’re old Kreuzberg gentry in a way. I don’t know why the park attracts these people. You have the feeling of open space and freedom and nobody tells you, “don’t do this, don’t do that.” Like with the golfers – it’s really dangerous if you think about it, but they’re not told to stop it.

Several of them mention that they don’t like talking to people, but they seem to find comfort in the park. Why do you think that is?

In the middle of the park there’s sort of a crater, the Kuhle. It has a special thing about it, it’s kind of magnetic, I don’t know why. Alberto the frisbee player, for example, has a quite traumatic history. He’s been trying to find his sister for over 30 years, he’s the son of a GI and was separated from her as a child. Playing frisbee in Görli is kind of therapy to him. For many people, the park is special. They go there because it helps them in one way or another. People search for something in there. It’s kind of a positive movie despite of some of the heavy stories.

You’re showing the sunny face of Görli, but there’s also a shady, gritty side: the drug dealers and alcoholics the park is also known for…

The two golfers mention it in the film, that there’s been an increase of drug dealing in the park but the drug dealers obviously weren’t interested in talking to me… I also don’t have any Turkish families in the film, which the park is known for, and the reason for that is that I just happened to be filming during Ramadan. The park has so many different stories. I just show a few of them. Actually I was lucky that I filmed it in 2009 and not later.. Last year a woman died in an accident. She was part of a drinking crew there, and apparently she got in a fight, fell and died. Nobody really knows what happened and it wasn’t even mentioned in the papers. But after that somehow the park completely changed