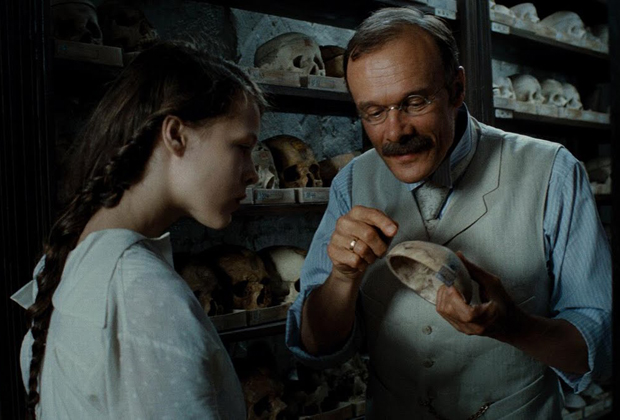 Poll is a labor of love and a family affair. Director Chris Kraus took inspiration from the life of his great aunt Oda Schaefer, one of Germany’s most famous poetess in the 1950s, to tell a complicated and sweeping tale of love, war and peace acted out in the fragile microcosm of a family home in a disputed land at a fateful time.

With a triumphal premiere in Toronto, a prize in Rome and three Bavarian film awards last month, Poll seems set to do well in Germany and Kraus to further build his reputation after the success of his 2006 film Four Minutes.

You started working on Poll a long time ago. What took you so long to turn your script into a film?

In the film business it’s not unusual you have to fight for stories. The whole background is so exotic and unusual for Germans, that it was very hard to get financed. When I wrote the script in the late 1990s, I would find directors but not the money. But then I started directing, and the success of my second movie Four Minutes helped a lot.

It was an ambitious project. Historic films cost a lot of money…

That’s correct. Pretty much at the same time, just think that even Michael Haneke, a world star, had a hard time finding money for his own historical drama [The White Ribbon]. Although we had a boy-meets-girl story, the fact that the girl was a 14-year-old didn’t help. People thought that maybe it was a Lolita story…

Oda is definitely no Lolita… When did you get so infatuated with her as a potential film character?

It began in 1993 when I went to Estonia and visited the family estate, the original Poll. I instantly fell in love with the building, the atmosphere, the feeling of the whole country. Only a couple of years before this, I had found out about my great aunt Oda Schaefer – born Oda Kraus – who lived there 80 years before.

You didn’t know of her before?

No, I found out about her very existence in the mid-1980s by accident. I was studying literature and I bumped into her memoirs, and found out that she was a relative of mine. You see, she was a bit of the black sheep type in a very conservative family. She was a leftist, and I think my father and grandfather didn’t like that so much. And they would never speak about people they didn’t like when the children were around!

No, not in Germany. And especially not in my family. To be a writer or a poet was not considered a serious job. So famous or not, it just didn’t count… It’s a very complicated story, the story of Germans in the 20th century. I think Poll just shows a bit of these complications.

I wasn’t sure of how much of your film follows Oda’s real story. What’s actually part of her memoirs, and what’s not?

Initially, when I wrote the story in 1996, I was very close to the memoirs, but over the years my ambition changed. I wanted to tell a good story, and although her memoirs remained the inspiration, they became more of a backdrop for the film. I added a lot of stuff, like the meeting with Schnapps – that’s not true.

In real life Ebbo, Oda’s dad, was a journalist. What made you turn him into a scientist?

Because it was better for the story. The story has to do with Oda, who’s an individual and who tries to find herself. Ebbo, the scientist, is someone who doesn’t believe in the individual or free will. Oda is a very modern character plunged into a patriarchal society… she has to find her way.

Free will versus human determinism?

Exactly. This is the main antagonism in the story. Oda keeps switching between two worlds. In the film it’s materialized by Ebbo’s two-level lab house: down there she’s in the world of her father, the old world of determinism, and upstairs she’s in the new world of freedom and open possibilities.

A character in its own right is Poll, the family estate. You said you went to Estonia and fell in love with the real house, why build another one?

When I was there in 1996, it was very special because nothing had happened for 80 years with this house. Unfortunately, all of these buildings have been renovated in the following years – and have lost their atmosphere. For two years we vainly searched for the right location. Then we found that beach in south Estonia, but there was no house of course. So we had to build one!

Who dreamt up that totally crazy, amazing architecture?

I did the original sketch. Silke Buhr was the production designer who brought it to life. The idea had to come from the director himself or people would have thought it was too crazy.

How long did it take to build it?

Six months. Normally when you need a house for a film, it’s only there for the shooting. You don’t erect a real one. But because we had to shoot 100 people inside, we had to erect a real, €1,000,000 building.

Is it still there?

No, that’s the tragedy, we had to bring it down. Now it’s gone.