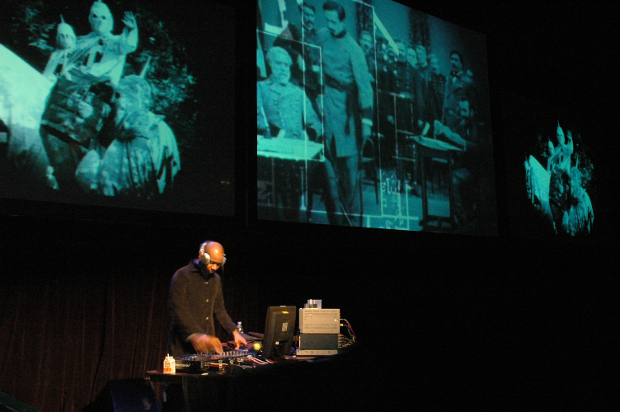 It’s been over 100 years since the release of D.W. Griffith’s notorious epic Birth of a Nation. In 2007, groundbreaking musician, writer and academic Paul D. Miller aka DJ Spooky aka The Subliminal Kid remixed the controversial film to put a new spin on it. (Get its soundtrack, made with San Francisco’s Kronos Quartet, here.) Join us tonight at EXBlicks’ Election Warm-Up Party at Lichtblick Kino (7pm), where we’ll screen the film after some drinks, food and lively conversation in the lobby.

Why did you want to work with Birth of a Nation? What does it mean to you?

Birth of a Nation is a foundational scenario in American cinema. When you look at all the cinema of our time, the echoes that Griffith set in motion are still going on. What’s fascinating to me is that fear, sexual assault, racial politics and a deep sense of anxiety hang over American and now global cinema. From Star Wars to James Bond, from Avatar to the Matrix, from Seven Samurai to Run, Lola, Run, etc. the way we see action and conflict in cinema comes directly from Birth of a Nation. It’s that deep. And it’s that simple.

Why is Rebirth of a Nation relevant today?

It’s relevant now more than ever – look at the police murders that occur almost daily and you realize that they do not see African Americans as human. The dehumanisation and demonisation of African Americans is implicit in America’s prison system and even President Obama is subject to this kind of narrative. The premise of Birth of a Nation is simply that African Americans are a deep structural flaw in the utopian system of America as envisaged by white Americans. The film plays with that headline as a basic ploy.

Can you give us a word or two on the current US election?

I just want to clearly state the obvious: Trump embodies the fear and anxiety of lower-class white Americans. By playing on their ignorance and selfishness he has been able to take America into a reality TV fantasy world. It’s a perfect post-modern scenario. I am definitely not voting for him.