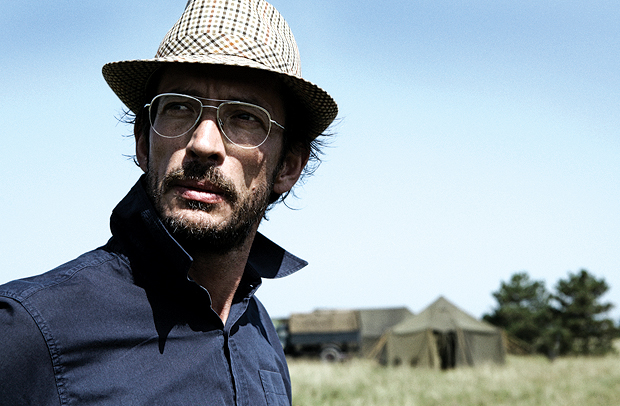 Oskar Roehler is used to controversy. After his hate-it-or-love-it 2006 adaptation of Michel Houellebecq’s The Elementary Particles, the German filmmaker is back with fuel for a final roasting.

As the film opened in German cinemas (in the unchanged Berlinale cut), Roehler sat down with a group of journalists to address – and in fact dodge – the criticism.

Your film received a rather harsh welcome at this year’s Berlinale. Were you upset?

Well, I avoided the papers the next morning: I just didn’t read them. Anyone familiar with the Berlinale knows that as a journalist on the tenth or eleventh day – that everyone is down to their last nerves and no one has their wits nor anything else together. And, honestly, the criticism of Elementary Particles was more hurtful. When people call it a bore and write things like, “What a great book and look what a dull movie he turned it into!” – that can really hurt your feelings. In this case, I felt very much above it all.

There were some legitimate criticisms, though. What about the historical inaccuracies, and what a clown Goebbels has been turned into?

But all in this inflated tone of indignation! Whether the film is great, mediocre or whatever, I don’t know. But what went on there can only be explained by the psychological phenomenon that is the final days of the Berlinale.

But take the scene in which Deutscher [a fictional Jewish character who feels betrayed by Marian] basically forms a lynch mob with a group of fellow concentration camp survivors and tries to stomp Marian to death. Earlier on, you chose to re-enact original dialogue from Jud Süß about “the vengeful Jewish God”. Isn’t that parallel/connection a little problematic?It seems to tell us that Jews don’t forgive… and take revenge. [Pause.] I’ve heard that criticism before and have put some thought into it. Honestly, I thought the scene was OK, and I stand by that – why should these guys react any differently? But in my defense, I thought the casting was problematic. All these 80-year-olds with mean Clockwork Orange-like mugs and plump bellies. I couldn’t do anything about it, as shooting days had been cut, and ultimately I didn’t get the chance to select the extras. We had cast these random guys without teeth from East Prussia for €20 or €30 an hour. When I saw them, I thought to myself, “These are supposed to be my concentration camp boys? No way!” The scene certainly would have looked different with other people in it.

The topic was already so sensitive: why did you take such liberties with real facts? For instance, why turn Marian’s wife into a half-Jew?

Well, in the Third Reich, basically one in three artists was married to a Jew. So that was a very exemplary situation. You really had to have the protection of someone important in the regime in order to prevent anything bad from happening. Promises were made… But it’s the same today: when you, the filmmaker, pitch a project to a producer, you know he will only ever tell you half the truth and a bunch of promises. He basically acts the same way people acted in the Third Reich: insincere and aware of their power. The difference was the backdrop – all that violence and the horror of the Third Reich. No one was going to tell you, “Well, you have a Jewish wife, now I control you.” But you would have had to live with this vague feeling of threat and uncertainty.

The Third Reich is a popular, albeit sensitive, topic…

Often the approach is incredibly stale, like on TV, where they still cater to the old patterns: nurse falls in love with firefighter, firefighter walks around so we can get a neat view of Dresden getting bombed. Well, the Nazis did the same thing in their entertainment movies: operator girl loves pilot officer, and then let’s show, say, how nicely the German air force can attack Poland and so on. So they still comply to the same pattern as they did back then. I realized at the premiere, in front of 2000 people, that my film is in fact more aggressive and uncomfortable than I thought when I watched it in the cutting room with two people. I was pretty surprised, but I kind of liked it – and I was worried I had made something dull!

There is no moral winner whatsoever, since not even the victims are granted a moment of grandeur or dignity. Is that the ultimate anti-happy ending?

In terms of dramaturgical expectations, that may be correct. Perhaps it also contributed to the tempers turning so bad at the end. But honestly, that didn’t bother me all that much. I thought it was cleansing in a good kind of way. I was just bothered by Deutscher’s final monologue, since it was way too facile

– as obvious as it gets. You have to be careful to avoid moral platitudes that everyone already knows anyways.

Why do Germans need Quentin Tarantino to assassinate Hitler in a movie, which had a cathartic effect. Wasn’t that our job to show a scene like that?

Inglourious Bastards was a coup, which I can’t really take seriously. I don’t like the premise at all: taking a bunch of ‘good Jews’ as a pretext to stage an orgy of violence that’s justified because it’s against the ‘evil Nazis’. I think it’s a cheap trick. People who think they are especially cool or modern might like this wanton Tarantino stuff, but for me it didn’t have much to offer. But you have to consider genre and the audience’s expectations. Whether you’re making a serious film or something aesthetically special, you have to elevate it to a different level. You can’t just leave it at a mere biopic and simply ‘tell it like it happened’ because that’s been done hundreds of times. I personally regard the first half of my film as very intense, since it shows how the system tightens the screws on Marian. At the end, I maybe wish I could have lifted it to a more abstract and philosophical level – beyond mere finger-pointing. But the script was supposed to depict Marian’s life story, and not transcend it in a Lars von Trier kind of way.

But didn’t you try to mimic Veit Harlan’s style [the director of the original Jud Süß]? Isn’t it fighting fire with fire, so to speak?

Well, you might think that because of the aesthetics – the sepia colors and such. I originallywanted to shoot it in black-and-white. I looked to American B pictures from the 1950s and 1960s, with a studio atmosphere. I wanted to approximate the style of the time, but I was thinking of Dead On Arrival [D.O.A, Rudolph Maté’s 1950 film noir], not Harlan films.