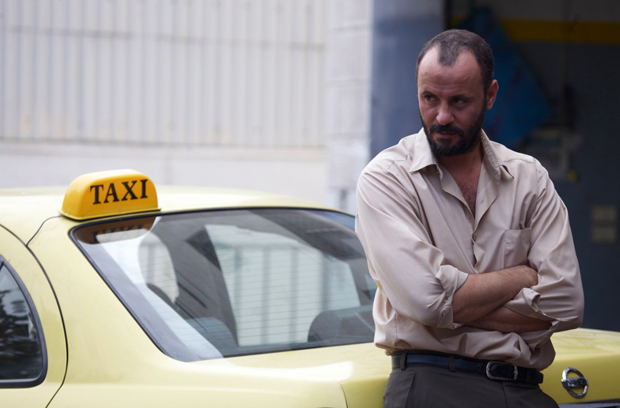 Al Juma Al Akheira (The Last Friday) has been one of the highlights of this year’s Forum section. An understated gem of a film, it follows the story of Yousef, a taxi driver in the Jordanian capital Amman, who after losing everything to his poker addiction has to live a life of isolation and contempt, watching impotently as his son follows in his footsteps (read my full-length review here).

Writer-director Yahya Alabdallah’s impressive feature debut already won him a number of awards when it premiered in Dubai in December and has received widespread critical acclaim. Now in Berlin for the international premiere of his film, he took some time out to answer a few questions.

Do you feel your experience studying in Paris added a Western flavour to Al Juma Al Akheira?

Actually, my three-year experience in France, it added something. When you watch the film, it doesn’t have a nationality. The way I shoot is almost silent, so that will give it more aspects to be internationally understandable. I do think my experience had an impact on that.

How did you come up with the story?

The scene where the guy comes and steals the parking tickets, that actually happened to me. I was downtown and I saw that I had a ticket, so I said, ‘OK, let’s have a sandwich, since it’s already there.’ Then someone came, parked behind me, looked around, took my ticket and put it on his car. Because the policeman will see who has a ticket already and will give another one. So I departed from reality with that scene and then took the drama line with the taxi driver.

Working with Ali was one of the really good experiences in making Al Juma Al Akheira. He watched a short film I made called ‘SMS’ at the Rotterdam International Film Festival in 2008. It’s a silent film and he liked the style and he asked me to send him my script. We talked for four months about the character and how to develop it.

The film works both as a personal portrait and a political allegory. How would you describe this interaction?

The political aspect provided the background, because the main reason I made this film was to talk about social issues. These are the first problems, which then lead the people to revolution, so I wanted to concentrate on them.

The fair situation for any citizen is to have a majority that’s from the middle class. And when you lose that, the moral system for the people who live together will be damaged: you will have two parts, and that’s not a healthy situation to live in. So the taxi driver is one of those that were in the middle class and then lost everything and became lower class, and the film examines how that will change his relationships with others, including his son.

The women in the film, unlike the men, are strong characters. Is this also a reflection of social realities or of personal ideology?

Actually, I don’t know. I think women are strong human beings, so I guess this idea is reflected in my film. There are a lot of films that talk about women as victims, so I wanted to talk about that from another angle.

The character of the son seems to be following in his father’s footsteps – are you negative about the possibility of change?

No, I’m positive, but it takes time. The character sees his son going in his direction and he wants to stop that, but he can’t, because the answer is not in his hands. That’s what I meant by saying the background is political, but the film itself is social. Those kinds of people, they don’t want to bring about the same situations for the next generation, and maybe the next generation will start changing things.

What makes the difference?

Knowing that there is a problem, that’s the start.